You tend to remember your first encounter with Moo Brew. Whether it’s the time you first spot John Kelly’s artwork adorning one of their rather sensual stubbies, or when that first sip of their Imperial Stout creep past your lips and sends your tastebuds into rapture, it’s a brewery that tends to make an impression. And now they’re in a position to make an even bigger one.

Moo has moved from its original home – a cylindrical lair encased in glass atop the ever-expanding and utterly unique Moorilla Estate empire poking out into the River Derwent north of Hobart – to a much larger (35 hectolitre to those who are keeping count) brewery a few kilometres up the road. Heavily customised to head brewer Owen Johnston’s requirements (right down to the unit handling the effluent out rear that he takes great pride in showing off!), it’s opened the possibility of making far more beer with greater consistency – but also created a new avenue for the brewers to let their minds run wild, with the old brewery now set aside for concocting limited release beers for the recently opened Museum of Old and New Art (MONA).

“It’s like going back to school again,” says Moo’s Jon Burridge. “The brewers get the keys to experiment more. On the one hand, OJ is a big believer in keeping the four core products unchanged, but now he’s also got his hands on the wheel of a ship that can sail wherever he wants it to go.” 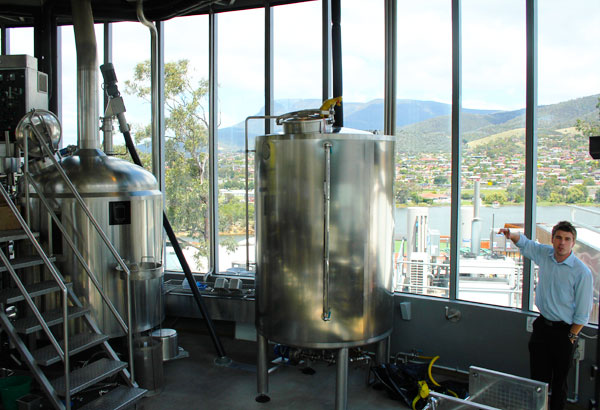 First into the tank is a hop harvest ale, using hops picked by the brewers themselves, including a relatively new and rarely used variety called Summer. Looking ahead, the plan for the smaller brewery is to coordinate beer releases with new artwork or exhibitions at MONA. The likelihood is that these beers will also only be available onsite, either in the MONA Winery Bar or in the underground bar in the museum itself. What’s more, there may only be one new beer each year.

As for the new brewery, Moo’s greater production capability has seen their Pilsner become available – officially – on the mainland for the first time, with Jon and OJ launching it earlier this week at Adelaide’s Wheaty and doing the same for Melbourne at Beer DeLuxe in April and New South Wales at a later date. Any Moo beer you pick up in stubbies around now could well be from the new facility too.

“Consistency is the key,” says Jon. “We want to ensure our quality of our four main beers gets better.”

For those who like their beers big, bold and rewarding, the good news is it also means they’ll be producing up to four times as much of their Stout as two years ago. Watch out for it in June.