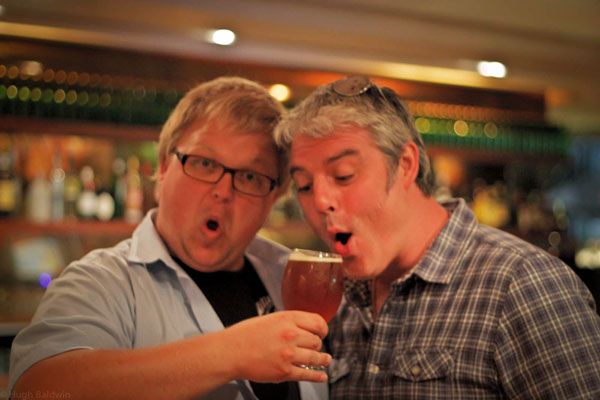 Beer DeLuxe recently took control of the Greek Grill upstairs from the bar at Fed Square, turning it into the Beer DeLuxe Grill with a focus on beer-friendly food – Jerk Chicken, BBQ ribs and the like. They plan to make full use of the space with regular beer dinners, the first of which saw Mountain Goat show off five previously available beers – Steam, Skipping Girl, Rare Breed IPA, Double Hightail and some cellared Rare Breed Surefoot Stout – plus an unexpected surprise. At the end of the meal, the first bottles of the Thorny Goat were produced fresh from the bottling line for a sneak preview of the Black IPA cross bred by Goat and the UK’s Thornbridge brewery.

It was also the first dinner hosted on foreign soil by Prof Pilsner of the Beer Blokes, who put newcomers to such pairing events at ease and proved an amiable host and poker of questions at Goat founder Dave Bonighton. Friend of Crafty Hugh Baldwin took photos on the night as Crafty had been enjoying a double birthday celebration with the Crafty Keg all day and felt it was best left to the professionals. And here’s the pick of them. Enjoy!