If you exist in or around the beer industry, you often hear the same topics – or variations on a theme – being discussed. When groups of industry professionals or ardent aficionados get together, you can guarantee that, at some point in the evening, one of a few hot issues will be raised. Yet try to take some of the discussions from behind the metaphorical closed doors and into the public and, well, conversation can tend to dry up.

Enter The Secret Brewer, a new, occasional series in which a brewer is able to don the cloak of anonymity to unload on such topics. Each time, we'll follow up the next day with responses to the points raised.

By bringing these topics further into the public arena, we hope to help move discussions forward. First up, gypsy and contract brewing...

I am a brewer who has been working in various roles in the local beer industry for more than a decade and I firmly believe that gypsy or contract brewing – however you want to refer to it – poses a major threat to the Australian craft beer industry.

Don’t get me wrong, I’m not saying having beer brewed for you under license is inherently a bad thing, but I am genuinely worried.

There has been a major influx of new brands in the past couple of years – both from people with actual breweries and those without – and this, naturally, increases competition in the fast-growing, but still small, craft marketplace. And among those brands are some that possess few, if any, of the values that those who care about such things would say make something a “craft beer”, however you may define that term.

There are brands created by people with no connection to the beer industry, who have spent little or no time in the industry, and have no interest in the flavour or character of their beers. They merely see a growing industry with a buzz around it in the media and figure there is money to be made. They take no interest in the recipe of their beers, just pick a few buzzwords off a shelf and find a brewer willing to make those beers for them – sometimes with instructions along the lines of “Just make it as cheap as possible.” What money is to be spent will be allocated to marketing, PR or trying to ensure they can undercut the price of other small brewery beers on the shelves.

I see a number of issues here. It is becoming incredibly easy to have a batch of beer brewed. Depending on the batch size you want, you could have a run of keg or bottled beers ready to sell for as little as $5,000. Sure, there’s nothing to say this is wrong, but it means people with no love for an industry that has been built over the past 30 years by people who have sacrificed much and often continue to struggle, can hoist themselves onto their shoulders and get a beer to market with little effort, little investment and, perhaps, no care as to whether the venture succeeds or fails – or whether the beer is any good.

If you’re not someone invested in beer, you may not know if a beer is any good so there’s a risk of poor quality beer – quite possibly presented attractively – hitting the market. Alternatively, you might have paid for a batch of beer that hasn't turned out well but decide that, as your investment is only a few grand, there’s little risk in putting it out into the market and potentially getting a bad reputation. On the other hand, if you’ve invested half a million or more in a business, you’re going to think very hard about releasing a beer you’re not happy with as the risk to your reputation is significant.

There are plenty of cases of people launching brands as side projects while they continue to work in the comfort of other jobs, often with no intention to ever leave that job. Their beer brand might be a vanity project to impress mates or simply a bit of fun on the side. Fair enough, but to those of us who care about where the Australian beer industry is heading, it threatens to muddy the waters, confusing buyers with a proliferation of brands on shelves and in fridges, and making things harder for those who care deeply.

At this point, I must emphasise that there are plenty of people operating as gypsy brewers – working closely with the breweries where they have their beers brewed – who care as much as those of us with physical breweries; many work tirelessly not just to promote their own brands but also the industry itself. Similarly, there are those who operate as contract businesses, working with the same facility to brew all of their beers and taking control of their recipes, who are keen to make sure their brand is known for quality beer.

Some, but not all, of these see such an approach as a stepping stone to owning their own brewery. Boatrocker operated as a contract brewer for years and released nothing like a Ramjet or sour saison in that time to help fund its brewery. Two Birds was a contract brand before opening its Spotswood facility, while Wayward in Sydney, Black Hops on the Gold Coast and many others besides have started out as gypsies. It’s not easy to raise the often huge amounts of capital required to build a brewery and this is one of many routes by which to reach that point.

Indeed, even if you don’t ever want to get to that point, I believe gypsy brewing is valid if the intent to make great beer, involve oneself in the industry and help educate drinkers is there.

But there are brands built on cheap beer, low emotional investment, a lack of desire to educate or to do anything other than try to make some money out of the industry. What’s more, I see some brands that are based on what some might call creative marketing, others upon straight out falsehoods.

Of course, such businesses wouldn’t be able to exist if there weren’t places willing to brew their beers. In my time as a brewer, I have worked with gypsy brewers or breweries with a lack of capacity at their own sites to create batches of beer. But I have always met with them first to understand their intentions and make sure they care about the beer quality, understand what they are doing and plan to bring good beer to the world.

As existing breweries expand and new ones open, and as competition for taps and shelf space intensifies, there will always be facilities out there with spare tank space – some breweries are even set up with this as part of their business plan. An empty tank means losing money, so agreeing to fill it with someone else’s beer makes financial sense – and, believe me, breweries receive a lot of calls from people wanting to make beer. But it also poses risks: that brand you make beer for might take a tap or customer from you; this side of your business might become an easy source of income so you take your eyes off the quality of your own.

On the flip side, there is the danger that comes with gypsy brewers not having control over their product. While some may not want control – just liquid in a bottle, can or keg to market to their intended audience – those that do are putting much of their fate in the hands of others. Personally, I couldn’t imagine letting someone else control the quality of my beer.

Then, once those who have conceived a brand have beer to sell, what happens if they possess little or no experience of the beer industry or knowledge of beer? At a time when educating the beer world is vital, it’s no good if there are brand owners selling beer and telling a story who aren’t educated themselves.

So what are the answers, given there is little to stop the avalanche of new beers and brands hitting and saturating the market? From a personal perspective, I’d love for anyone wishing to enter the beer world in this manner to really get involved in the industry. Just being a homebrewer or having a mate that’s good at marketing doesn’t mean you should release a beer.

Go on a short brewing course, such as those offer by the IBD, to learn the fundamentals of brewing. Get involved in the industry by attending festivals or events, visit breweries, contact brewers and ask for a chance to sit down and chat; a lot of brewers are open with their time if they realise the person asking is serious about the industry – but also be conscious that brewers are very busy, with many working six or seven days a week.

Talk to venue and bottleshop owners too: selling the first batch of beer is easy as you’re new, but this industry can be fickle. Once people have tried it and logged it with Untappd there will be less up front demand for the next batch.

Maybe gypsy and contract brewers can band together? There are examples of businesses joining forces at a single brewery, so how about a co-op? If these brewers want more control over their destiny, then come together to build a brewery to share. It reduces the startup cost per brewer of getting some skin in the game too.

But perhaps the best way forward, as it is for many of the issues in the contemporary beer industry, lies in labelling. If there is an industry standard in labelling that includes a need to state explicitly (and honestly) where a beer is brewed and by whom, then false claims over provenance or attempts to pretend to be something more than a label would no longer be possible. If it’s not possible to get all gypsy or contract brands to play by such rules, then maybe breweries who brew their own beer in their own breweries can take a lead: changing their labels and marketing to showcase front and centre that their beers are brewed by them in locally-owned breweries.

Despite the above, I have no desire to tell people what to drink or what sort of breweries or brewing companies they should buy beer from. But I am concerned for the future of our industry, see a threat posed by the flood of newcomers and, above all, want to see honesty and transparency – as well as continued education of drinkers and retailers – so that customers can at least make their decisions based upon fact not fiction.

Click here to read the follow up article, in which brewers from here and abroad respond to the key points raised. Tasmanian gypsy operation Devils Brewery has set up home in the historic Margate Train. Ruth Dawkins caught up with founder David Tottle to find out more about his beers and partnerships with local producers. read on 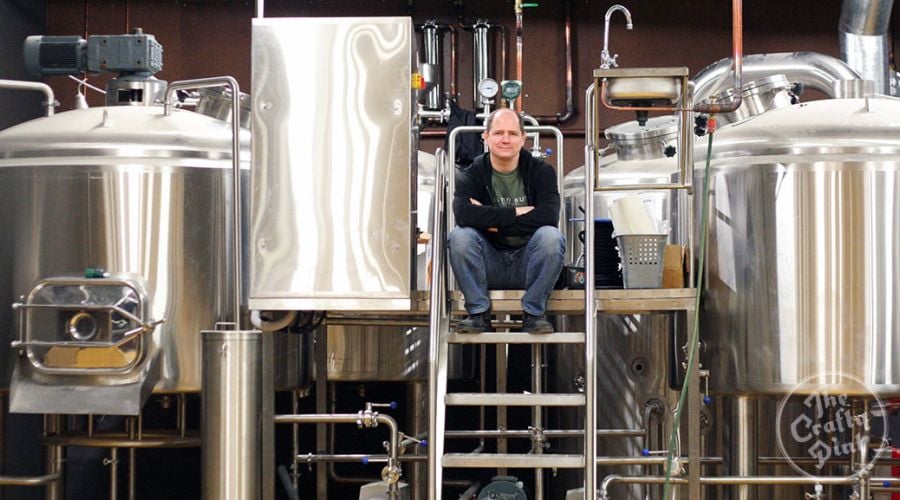