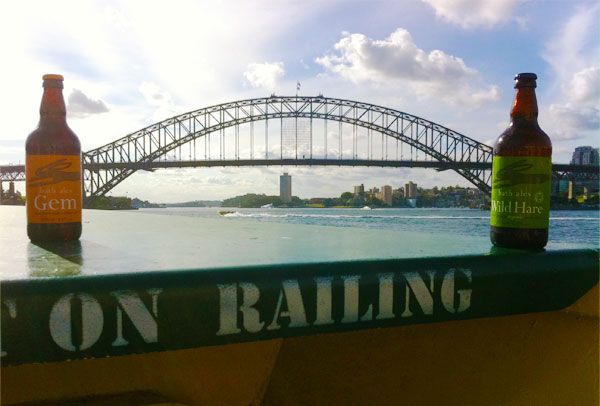 Blog of the Month: Back of the Ferry

Just like a micro bringing out a light beer, Crafty might be at risk of upsetting the purists here. Why? Because the first NSW blog we’ve asked to perform a show and tell doesn’t write exclusively about Aussie craft beer. Heck, they don’t even write about craft beer all the time. Worse still, they sometimes don’t write about beer at all. Well, the purists will just have to like it or lump it as we like what they do.

One of the quirkier blogs out there, it takes its name from the place where much of the beer drinking and conversation that inspires its content takes place: the back of the ferry from Circular Quay to Manly. You’ll also find musings on surf trips, photos of beers relaxing at the beach and whatever else takes the five contributors' fancy in a blog that’s rarely, if ever, serious but is a really enjoyably read. Over to you guys…

Name of blog: Back of the Ferry aka BotF

You write about: Beer, bars, the discussions on the Back of the Ferry and the occasional pursuits of the BotF boys when not on the BotF, but beer is almost always involved

What you do when not blogging: Work wise – different industries, finance, IT, gaming and cotton trading. Play wise – drink beer, surf, play darts, fish and listen to music

Why did you start writing the blog? To be honest work was a little slow and a couple of us were able to try a different bar between our work and the ferry and we started google mapping it. That turned into a blog and our mates enjoyed reading our blatherings about bars and beer and the Back of the Ferry discussions. It’s gone on from there.

Why should people read it? It is not a typical beer blog. For us it is as much about the environment in which we drink beer and the discussions beer lubricates as the beer itself. The beer is important however and we do some quirky research on it. We occasionally make an effort in relation to “Beer Porn” and one of our pictures got picked up an American site called beertography. We’re not elitist and what gets reviewed or discussed depends on what’s in the bottle shop before we get on the ferry. We are making an effort though. For example pommy_ch bought back some great beer from Bath, which got a run.

What do you love / enjoy most about beer? Its lubricating qualities and the camaraderie it creates. A conversation is better with beer.

Your favourite Australian beer? We’ve all got our own picks:

Favourite place to enjoy a beer? Back of the Ferry

Hopes for beer in Australia? That the craft brewing industry continues to flourish and grow rapidly providing an even greater variety of wonderful beer. I also hope that our craft beer is recognised internationally, which the government could assist by reducing taxes, etc on craft beer.