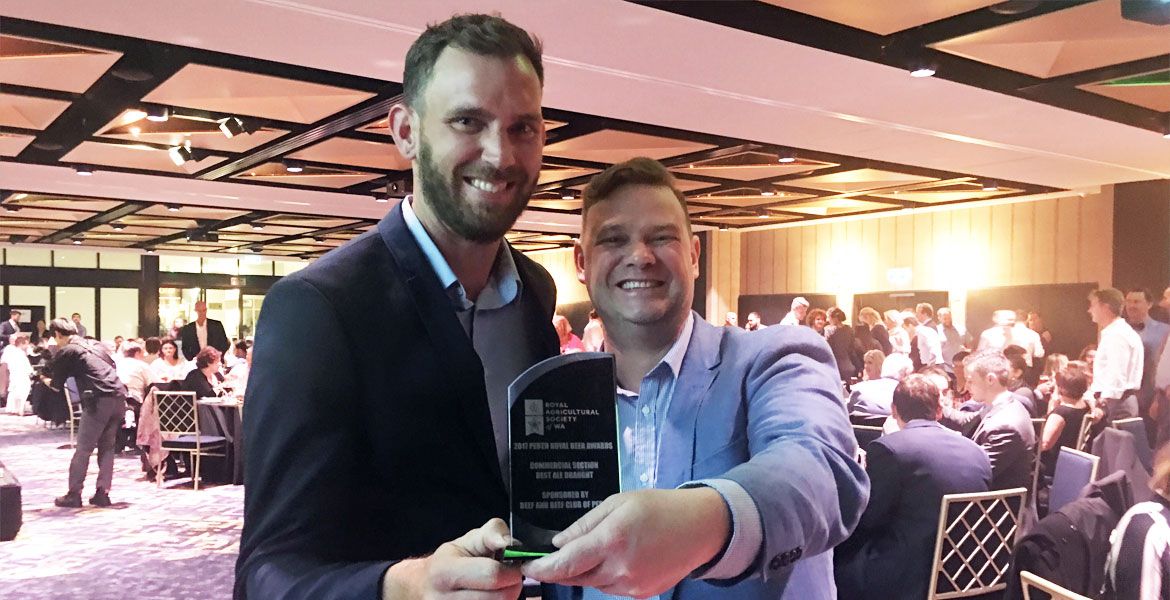 Finn Diesel, the 6.8 percent ABV India pale ale released mid-May, collected the trophy in the Best Ale Packaged section while the brewery’s Boris Russian imperial stout got the gong in the Best Stout Packaged category and their Razorback barley wine collected the silverware in the Best Draught Ale category.

Those prizes led to more success as Feral was deemed Best WA Brewery, for the second year in a row, and Best Commercial Brewery in show.

The man for whom Finn Diesel was brewed left his role as national sales and marketing manager at Feral at midnight last night after five years to join Gage Roads as its WA/NT/SA sales manager. Brewery boss Brendan Varis (above right) believed Steve's contribution to the business needed to be recognised before his exit and produced Finn Diesel under the company’s Brewpub Series label.

"Some people get a gold watch when they leave the company, I got champion beer," said Steve, describing Finn Diesel as "Hop Hog blown up". "There was no better way to say thank you than having a great beer that was a collaboration between the sales, marketing and brewing teams.

"I've made some lifelong friends at Feral and we'll always have the beer now."

The trophy win for Finn Diesel is also something of a first as the beer features the new-to-market hop product, lupulin powder, with Simcoe and Citra extracts used at various times ing the brewing process.

The PRBS recognition was timely as Feral was ineligible to enter May’s Australian International Beer Awards due to the fact that Brendan was head judge.

As a regular stout, the beer won a silver medal at last year’s awards. However, MR Brewhouse boss Andrew Dykstra put a portion of that brew into Limeburner Distillery whisky barrels to produce an upgraded version that impressed the judges.

Homestead Brewery, part of the sprawling Mandoon Estate in the Swan Valley, won the PRBS trophy in the Best Wheat Beer Draught category for the second year in a row with its Kaisers Choice Hefeweizen. And top prize in the Best Reduced Alcohol (Packaged) class was claimed by Gage Roads’ Pils 3.5.

Another trophy headed south with Margaret River’s Cheeky Monkey judged to have the Best Lager (Draught) in the shape of its Australian Lager, while James Boag’s Premium Lager came out top in the Best Lager (Packaged) section. Chris de Chaneet and Ben Tearne* were deemed joint Best Amateur Brewer while David and Brigit Seaman were awarded Best Amateur Beer for their Raspberry Pie Berliner Weisse and get the opportunity to upscale a beer as part of a mentoring program with Feral.

* This has been updated. The initial results issued omitted Ben Tearne from the list of winners.