For all its storied history, dating back to the very first gold rush in Australia, think Bathurst and the vast majority of people will think of one thing: the Bathurst 1000. And, as with pretty much every major sporting event in Australia, it's not something you would readily associate with craft beer.

Yet two brothers born in Mudgee, and who grew up in various locations around country New South Wales, have set out to put Bathurst on the map for just that. Campbell and Greg Hedley are the two heads behind Two Heads, which operates out of a former mill in the city, and have recently started sending their beers further afield as part of the growing Bucket Boys roster.

The two had been working in Sydney, Campbell as a lawyer for an investment bank, Greg in construction as a quantity surveyor, but were ready for a change. So, having decided to leave Sydney behind, the keen homebrewers returned to their roots and ended up starting the first new brewery in Bathurst in 70 years.

"We were looking around Bathurst and Orange originally," says Campbell. "Orange is pretty well developed with craft beer and the wine community [so we] thought there was more potential in Bathurst."

The deal was sealed when they found the century old Crago Mill, which had been empty for 20 years before being refurbished and becoming home to antiques and a café. They moved in, ripped out most of the plasterboard and stripped it back to be close to how it would have been, before building a brewery and installing a restaurant and eight tap bar.

Greg's now there full time, with Campbell having transferred his skills to a large pastoral company in Bathurst and working the bar on weekends. There's a key third member of the team too – one that joined them almost by accident.

Ian Carman is their brewer, a "mad keen homebrewer" who had been working as a forestry engineer. He offered his services while they were setting up the brewery – "he mucked in and swung the sledgehammer with us," says Campbell – and impressed so much he's no longer a forestry engineer.

Says Campbell of their plans: "We want to be the alternative beer of choice in the Central West."

Here's more from the Two Heads, as they feature in our Who Brews...? Q&A.

We both got back from extended stints overseas about four years ago, arriving back in Australia on the same day. We moved back to Sydney and slotted back into the corporate grind and immediately started scheming a way towards making something tangible that we could share with others. A mutual love of beer and brewing made a brewery the logical step, and the ability to do that back in the country, where we grew up, was a big factor.

We’ve put out a Golden, Pale, IPA, English Mild, Porter (the usual suspects…) as well as a Helles Lager and an XPA (which in our interpretation is somewhere between a Pale and an IPA).

We also produced a GABS Beer made with 20 percent locally grown grapes, and have a Saison in the tanks at the moment that we’ve been working on with Bucket Boys – it’s been fermented with freshly picked local feijoas... So, we’ve been busy!

The Piper XPA is probably the standout – it’s got plenty going on in terms flavour and aromas, but it is very balanced ad deliciously drinkable. The inspiration for the recipe came from a local homebrewer who won our inaugural Home Brew competition, who then helped produce the first batch on the big kit, so that makes it particularly special.

Our logo is a Monkey and a Walrus, childhood nicknames that we decided to embrace and build a brewery around!

Campbell: My love of beer as more than a pathway towards inebriation started with my first Coopers Sparkling 20-something years ago. Realising beer could actually taste good and be savoured was the first foot on the path for me.

Greg: When I first moved to the US back in 2007 I was a craft beer novice. Not really knowing what I was getting into, I attended my first beer festival in Scottsdale, Arizona, of all places, which opened my eyes to a whole range of great new beer styles. From that point on I was hooked.

Oasis. Although we haven’t gone full Noel and Liam… yet.

Campbell: I’m going to want it to keep for a while, so let’s go with Westvleteren 12.

Greg: I don't think I could choose one! Besides our own beers, I rarely drink the same thing twice these days.

We’d love for our beer to be the one people reach for in our region when they want something a bit different; and we’d love it if people everywhere thought of Bathurst as a place where they make great beer, not just race motorcars.

Campbell: A bunch of Two Heads underfills (the benefits of brewery ownership…), a few cans of Modus Operandi and Pirate Life that have recently turned up in bottleshops out here, which is great, and a CANimal of Thirsty Crow Vanilla Milk Stout that I picked up on the way through Wagga recently.

Greg: I've usually got a few Two Heads beers in the fridge (quality control) and I often pick up some random beers from places like Akasha, Wayward and Batch when I'm in Sydney because we can't get their beers in the Central West.

Bucket Boys in Marrickville is the first port of call in Sydney, as well as a (hopefully increasing) number of bars and pubs. In the Central West, the likes of the Lord Anson in Orange and the George Hotel in Bathurst (both cracking craft beer pubs).

Otherwise, come see us at the brewery – we have a bar and restaurant alongside eight taps, a bunch of local wines and ciders and a tasty menu, all inside a 100-plus year old flour mill. And we’re only three hours from Sydney!

You'll find Two Heads at 2a Piper Street, Bathurst, and other Who Brews? articles here.

And, if you're reading this close to publication and live in Sydney, look out for Two Heads appearing on Sydney Weekender. 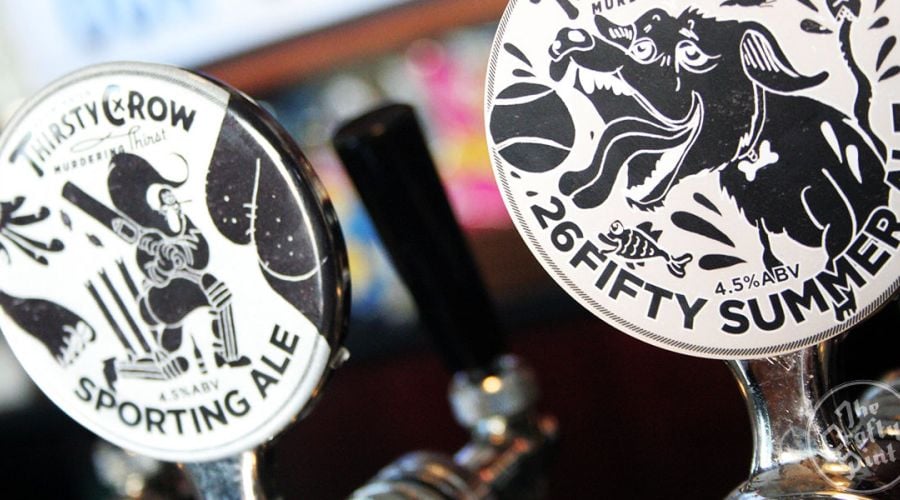