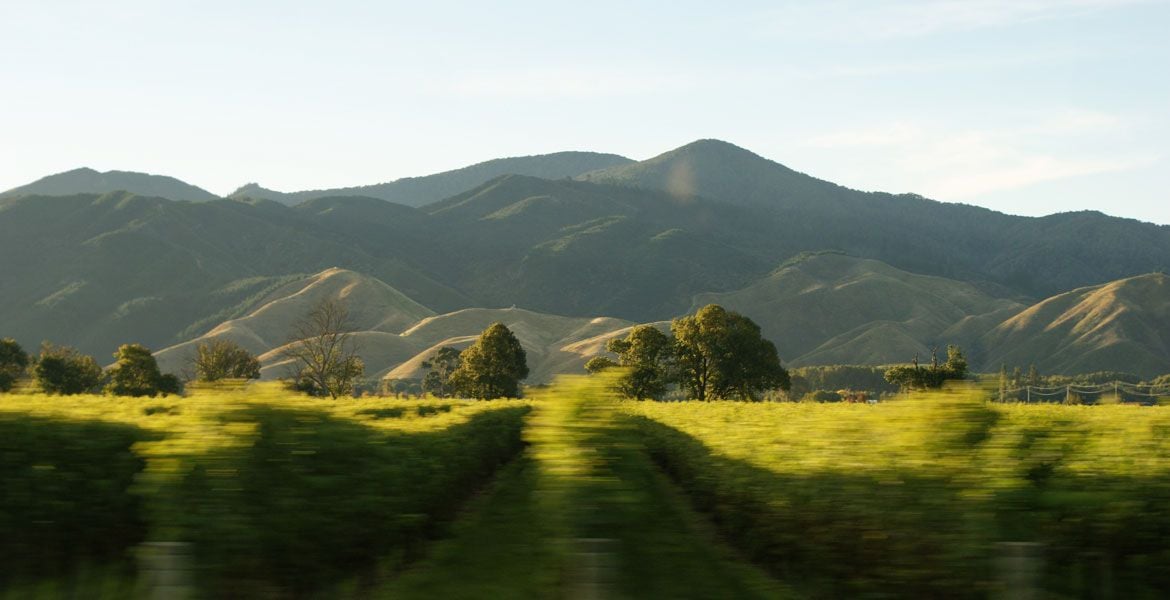 While Wellington claims to be New Zealand’s "craft beer capital" and cities like Christchurch and Auckland occasionally stake a claim for the title, the Nelson/Tasman area feels like its home. Sprawling across the top of the South Island, the area is home to one of the most diverse range of breweries in the country, some of the nation’s best pubs and all of its hop production.

Our Man In NZ Jono Galuszka recounts his weeklong road trip through an area where vineyards, toads and the destruction of cellphones all play a part in beer culture.

It is amazing how something as simple as a pint can let you know you are somewhere different.

Those from the North Island of New Zealand are happy with sipping out of a 425mL repurposed Boston shaker glass. But, order a pint in the South Island and you are almost always welcomed with an English-style 568mL glass. It's a cosier kind of glass, made for delivering comforting ales to people sitting in a corner with a book or a board game. Indeed, it would not be a stretch to say a pint sums up the area’s beer well: cosy, approachable, comfortable in its own skin.

North Islanders can get their fill of such beer on the ferries which run between the two islands. There is something idyllic about taking a drink onto the deck of a ferry as it snakes through the undeniably Instagrammable waters of the Marlborough Sounds. If you get lucky, dolphins will usher you into Picton, a town with an economy reliant on the passenger service. It is a pity its pubs are nothing to write home about, although its supermarket has large “local” labels beers from nearby breweries like Renaissance and Moa.

It's only a short drive from Picton to the Marlborough vineyards, famed for birthing the country’s take on Sauvignon Blanc: bold, juicy, fruity and grassy. Wine tours in the region are a quick way to take in the sights and meet a few locals, including the dogs present at almost every winery, but denominational beer drinkers are not left out. Tucked up a long driveway, surrounded on all sides by vineyards, is Moa Brewing Company’s taproom and brewery.

Founded by Josh Scott, the son of winemaker Allan Scott, 14 years ago, Moa has gone from a one-man operation to a stock exchange-listed company exporting to multiple countries. But its base gives no hint as to how big it has become. Staffed by knowledgeable and friendly staff, the lineup features one-off beers and year-round products. Winners of local homebrew competitions often get the chance to make a batch at Moa, which is then served at the taproom.

Some many think it a heathen act to drink a glass of pale ale in the heart of wine country, but someone once told me it takes a lot of beer to make a good bottle of wine.

After filling your boot with hard-to-find bottle stock from Moa, make your way west along State Highway 6 to Nelson. The largest city in the area, Nelson offers something for every kind of beer nerd, including a brewing museum at Founders Heritage Park.

Learning about beer is one way to get thirsty, so the Founders Brewery (pictured above) is handily located in the park. While the Founders brand was purchased by Asahi-owned Independent Liquor in 2012, the brewery in the park is still owned and run by the Duncan family, who can trace their brewing history back to Joseph Dudson, who in turn got into the local brewing industry in 1854.

But to get a better idea of Nelson’s beer culture, head to The Free House. The pub gives away its previous life as soon as you walk in. It's easy to see where the organ and pulpit would have stood in its time as a church. The pulley system built to display Bible verses and songbook numbers remains, but is now used to let the non-denominational congregation know what beers are on offer.

The place more than lives up to its name, having served more than 1,000 different beers since it opened in 2009, many of them cask conditioned ales served via English beer engines. While the odd beer from the North Island or further down the South Island makes its way to the taps, the lineup is dominated by locals. But what really sets the pub apart is its links to local businesses. The staff will happily run across the road to the excellent Indian takeaway to fetch drinkers a curry, while local journalist and music aficionado Grant Smithies has taken to selling vinyl records from the pub’s beer garden every Friday and Saturday under the name Family Jewels Records.

Nelson’s breweries all seem to be rooted in a more English mindset. Perhaps it's the size of the pints, or the heritage of people like Sprig and Fern head brewer and owner Tracy Banner (a Liverpudlian) which steers beer culture that way. And that's not a bad thing; Tracy’s best bitter and Scotch ale are amazing beers to sip while reading the local papers or snacking on nibbles at one of the many Sprig and Fern pubs dotted around the area. But sometimes you just need a punch in the face from some hops. And when you do, Eddyline Brewery can deliver.

Located a short drive from the city’s CBD, Eddyline is unashamedly American. It makes sense, considering owners Mic and Molley Heynekamp started by establishing Eddyline in Colorado in 1999. The couple visited New Zealand in 2010, saw potential to replicate the business there, and set up in Nelson six years later.

The hop lampshades in the brewpub are a welcome sign of what is to come from the beers. The IPAs are lean and punchy, while the pale ales throw off plenty of hop aroma. But it is the brewery’s use of New Zealand hops that is most impressive, especially the trial hops it is provided by the country’s hop breeding programme.

And if it's beers of this ilk you're after, Golden Bear (pictured below), run by Californian export Jim Matranga a short drive away from Nelson in Mapua, is another must-stop spot for hop fiends.

Westward, always westward, along along the Coastal Highway and Motueka will greet you. While the town lends its name to one of one of the country’s most pungent hops, it was barren of breweries until Martin Townshend moved his operation there. Judged the country’s best brewery at the Brewers Guild of New Zealand Awards in 2014, Townshend Brewery operated from Martin’s property from 2005 until it moved out the back of Motueka’s Toad Hall in 2017.

The move came after a turbulent time in the brewery’s life. He looked to expand after his award in 2014, signing up to contract his core bottled range at Tuatara Brewery. But a range of issues, including gushing bottles and stock not moving, hit him hard. A sprawling site stocking organic produce and excellent coffee, Martin moved his brewery there after outgrowing his home base, and hopes to get himself a slice of the action brought by the 500,000-plus people who pass through the town each year.

While best known for his English-style ales, with the Old House ESB a cracking pint from cask, Martin is also producing beers especially for Toad Hall’s customers. The Pouri Lane Pacific Lager, hopped with Cascade, Citra and the divisive Japanese hop Sorachi Ace, is especially quaffable. His Black Arrow pilsner is just as good, an excellent demonstration of how versatile UK hops can be.

Keep heading west and you will find yourself in hop country. Depending on the time of year, your view from the highway will either be one of hop bines climbing to the sky, or slash left over from the hop harvest. If you’re especially unlucky, you will have to drive through the area during one of the worst storms of recent times, making the hop fields more conducive to apple bobbing than beer drinking. It will also make the drive over Takaka Hill all the more interesting, especially when trucks going downhill try to pass campervans around blind corners.

But the reward is worth it. While the eastern side of the hill has an English vibe, the western side feels so laid-back you could swear the locals are horizontal. A hideaway for hippies and those wanting to drop out of society, the small town of Takaka and surrounding areas is the perfect place for anyone wanting to get away from it all. The food is organic, the cheese is funky and the kombucha is served from a caravan by a woman dressed like Peter Pan.

It truly feels like you are on a journey into the middle of nowhere at times, as you continue driving west towards the ominously named Farewell Spit. Your last stop before getting to the edge of the island is a bar you could spend five minutes or five hours at and somehow have an experience that was both perfect yet too short: The Mussel Inn.

The Mussel Inn sums up the hippie feel of the region especially well. One of the first things you see as you walk in is a wooden pole with cellphones nailed into it. It serves as a warning and an invitation: talk to each other, not your screen. Frankly, you're better off paying attention to your glass of beer brewed on site.

The Mussel Inn is best known for Captain Cooker, a red ale spiced with the tips of the native manuka plant. Captain James Cook used manuka in the first beer brewed in New Zealand, describing it as “exceedingly palatable and esteemed by everyone”. His namesake beer could take the same description. The pub is also a well-known gig venue, but try to get there on a quiet afternoon; the atmosphere is just as satisfying as the drinks.

You can keep following the road west if you like, all the way to the edge of Farewell Spit. It's the perfect place to pull a flagon of beer out the boot, sit on the beach and drink in the view across the Cook Strait towards Wellington.

You can actually glimpse the North Island on an especially clear day. But, with golden sand between your toes and a cup of locally brewed pale ale at your side, you almost want a cloud to roll across the horizon – anything to stop you facing a return to reality and bidding farewell to an especially cosy corner of the world.