Blog of the Month: From Beer To Eternity

A bit of a change in direction here. While last month’s featured bloggers were a bunch of Sydneysiders casually documenting their drinks and pub visits in between surfing trips, this time it’s the turn of a couple of newcomers to the beer writing scene who have their focus set firmly on the crazy, the unusual, the special and the downright weird of the beer world.

They’re the sort of guys who spend the whole of New Year’s Eve traipsing around Melbourne’s bottleshops emptying their wallets on a handful of beers, then sit by the beach watching the fireworks over the city from a distance while concentrating far more attention on the fireworks going off in their gobs. And they’re the sort of guys who enjoy the odd literary flourish and aren’t afraid of a terrible pun, the kind of thing of which Crafty heartily approves, even if Martin Amis highlighted it as one of few failings in the writings of Christopher Hitchens (sorry – wrong meeting).

Anyway, without further ado, we hand you over to David and Rian…

Name of blog: From Beer To Eternity

Dave: The blog is the avenue for me to display my thoughts on the craft beer scene in Australia as well as posting reviews of select beers in the Brew Views section. There is a third section to the blog that is Brew Blues which is basically a journal of the home brew batches I have made. This was actually the initial reason why I started the blog but I quickly became aware that it is just so much more interesting to write about other people’s beers, venues, events. It’s safe to say the Brew Blues section doesn’t get much love any more.

What you do when not blogging:

Dave: I work for Origin Energy as a Business Contact. It’s just as exciting as it sounds, which makes the pursuit of great craft beer all the more important.

Rian: Working for the Fair Work Ombudsman as an advisor, trying to rebuild a soccer career that was shattered by injury and a complete lack of talent (mainly the latter), musician and …. ahem… hip hop emcee (mutually exclusive). Oh, and drinking fine craft beer.

Why did you start writing the blog?

Dave: I started writing about beer when I realised that certain beers just needed to be written about. The first time I had the Orkney Brewery Dark Island Reserve, I immediately jumped on the laptop and punched out a ridiculous two page review and sent it to Rian. I told him that it was so good that it “inspired literature”. This became a grading benchmark from then on. “It’s pretty good, but does it inspire literature?”

Rian: I guess it was inevitable, the combination of putting a previously unused journalism qualification to practice and extolling the virtues of good beer to anyone who cared to listen. We’d spent a lot of time sampling a variety of malted and hopped refreshments and we had often discussed, whilst suitably ‘refreshed’, a way of putting our love of beer and writing hobbies to use.

Early failed attempts included a foray into Beerotic Fiction, but after several rejection letters from Mills and Boon, we decided on more of a conventional approach. From Beer to Eternity was born at the bottom of a bottle of Orkney Brewery’s Dark Island Reserve, christened in 2 Brothers Voodoo, and took its first steps with a pint of Red Hill Hop Harvest in hand. It was Dave who actually raised it from birth, I just get generous visiting rights, I teach it how to curse when Dave’s not around. 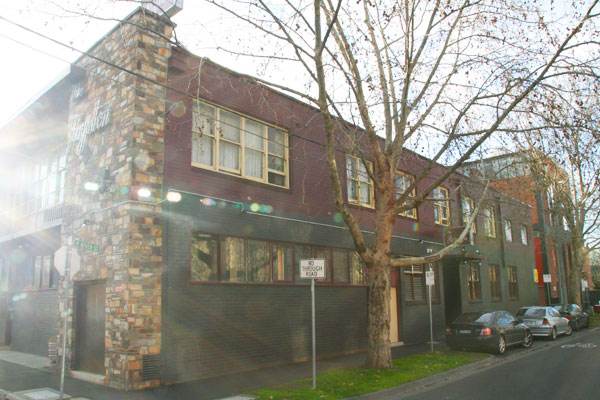 One of the FBTE’s preferred drinking holes – Richmond’s Royston

Dave: Good question. A little too good actually… People will get a slightly different angle when reading our blog. We inject a lot of ourselves into our posting so it can seem less like journalistic blogging, and more like the ramblings of a fool. The main reason that people should read From Beer To Eternity is that we don’t skimp on content. We review the beers that we are excited by and we post about the events and issues that excite us, so we hope it’s interesting and entertaining for people who read it.

Rian: It’s a bit of fun. It’s more of a travel blog of our journey through an ever growing Australian beer culture. We tend to write about things we’ve sat around and discussed and heatedly debated during a beer session, so most of what we do ends up as more of an opinion piece, but we like to think of it as a reasonably well informed, well experienced opinion piece. It’s basically three guys talking about their passion for beer and why you should be passionate too.

What do you love / enjoy most about beer?

Dave: I am purely excited by great quality beer. New beers and new releases of beer create more anticipation than they probably should. At the latest showcase when I found out how many breweries were going to be creating Harvest ales, this made me excited. More recently when I saw which breweries were going to make seasonal Easter beers, it made me excited. The quality of the breweries that are around mixed with the growing amount of venues that will be prepared to support them gives them such a license to really be bold with the beers that are made. Just talking to Josh and Karl from Moon Dog about the beers they are tackling is enough for my anticipation to balloon. I guess it’s really the diversity and incredible quality of beers that are being brewed that I enjoy most about beer.

Rian: The exploration, the anticipation of new releases, the constant possibility of stumbling across something amazing. There is so much depth, character and variety being produced in this country at the moment and with more and more people waking up to this, we’re only going to see the industry boom, creating even more depth, character and variety. Craft beer is the new Rock n Roll, the brewers all but idolised frontmen, each bottle containing label art worthy of any iconic long player and the drinkers themselves just the adoring masses caught up in this sweaty snake-pit of amber passion.

Dave: This question is nigh on impossible. Murray’s Spartacus made a big impression on me when I first tried it. More recently Red Hill’s Hop Harvest on the hand pump made me weak at the knees. It was fortunate that I was sitting at the time. 2 Brothers Voodoo was one that I enjoyed immensely (and often, down at the beer hall in Moorabbin). Holgate’s Double Trouble and Hopinator are really excellent beers that have got my attention. Feral Hop Hog is another very classy beer. There are more, but I have a feeling this is more information than is required.

Rian: Such a tough task to narrow it down to one. If you bend my arm, I’d have to say the Red Hill Hop Harvest on hand pump from the Red Hill Brewery. I’ve never been so instantly smitten with a beer, just watching the cloudiness settle in the glass like a clearing horizon made me nostalgic for cold nights in a Sheffield pub, drinking real ale until last drinks. But in saying that, it breaks my heart not to have mentioned Holgate’s Double Trouble, Bridge Road’s B2 Bomber, Murray’s Imperious, Feral Hop Hog or of course Stone & Wood’s Pacific Ale.

Dave: This question is just as tricky as the last! I think you’re doing it on purpose… Samuel Smith’s Taddy Porter was an important epiphany beer for me, but favourites would include most of the BrewDog selection. I’ve really been on a bit of a New Zealand kick lately and the 8 Wired Tall Poppy is probably my pick from over the Tasman. The Southern Tier Creme Brulee Milk Stout was a highlight from my NYE beernanza while the icing on top from that night was the Orkney Brewery’s Dark Island Reserve.

Rian: Again, not an easy task… Samuel Smith haw never let me down with his range of ales and the Southern Tier Creme Brulee was a treat to behold, but I’d have to say the Orkney Brewery Dark Island Reserve is still at the top of the list.

Favourite place to enjoy a beer?

Dave: The Local Taphouse in St Kilda is probably the closest location for me to get great craft beer but in the city it’s hard to go past Biero. The Royston in Richmond is also a really great place for craft beer (and their great food!). 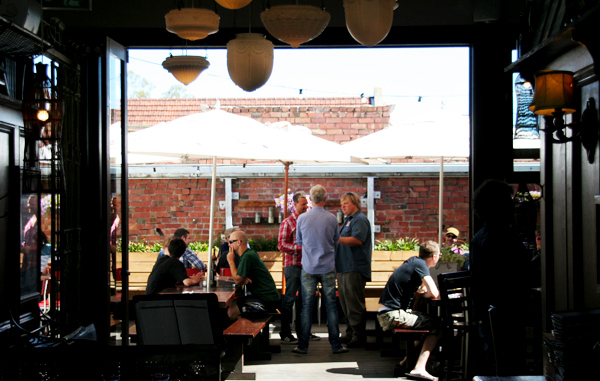 Another favoured spot – The Local Taphouse

Rian: The Royston Hotel, feels like a proper local, absolute quality on tap (and one of the few places in Melbourne that have a hand pump tap). Biero, because I love their philosophy of spreading quality beer to the masses at an affordable price and the passion they have in delivering it. The Local Taphouse… because… well, it’s got 40 taps, and rarely has a bad beer on.

Hopes for beer in Australia?

Dave: I have really high hopes for the beer scene in Australia to evolve way past the depressing, dusty, dilapidated state it has been in. I have such high hopes because the change is happening already. We’re witnessing a beautiful revolution at the moment and people really seem to be realising that it’s not all about tasteless lagers. Events like Good Beer Week are such a great way to move the industry forward as it will likely pave the way for far more regular beer-related events to be held, enjoyed and appreciated! Good times are on the way for Australian craft beer.

Rian: I’ve really enjoyed watching the culture grow, even just in the last two years, we’ve seen a real explosion in the amount of beers and real beer venues cropping up around the traps. I’d like to see this continue. And i’m probably banging the same old rhetoric drum, but I’d also like to see the independent craft beer market get to a stage where you can walk into any pub in Australia and have genuine choice of locally brewed beers on tap, instead of having 8 ‘different beers’ brewed in one Abbotsford-based vat that taste like they were made from the same bath water.

I think the main focus really needs to be a drop in the excise tax for locally produced beers though, which would only further the expansion of the industry and by making craft beer affordable, making it more accessible to a wider market. And i might be able to afford more nice things.

If you’ve made it this far and still want more (Crafty does) then you can follow the chaps on Twitter here and here.