When you grow up in the belly of a brewery – a legendary brewery, no less – what are the chances you’ll become a brewery owner yourself? For Trystam Hayden, the odds of forging a different path certainly seem to have been stacked against him from early on.

As the son of Blair Hayden – who took over The Lord Nelson in Sydney in the mid-80s and launched one of Australia's first contemporary microbreweries in its belly – Trystam spent his early years at one of Australia’s pioneering brewpubs, which celebrated 30 years of making beers in 2016. The Lord’s history stretches back much further, to 1841, making it Sydney’s oldest continuously licensed pub.

By the time the 30th anniversary rolled around, Trystam had left Australia for Canada, but brewing remained in his blood as he soon established his own brewery there. Here, as part of our Aussie Exports series, he tells us all about life as a son of The Lord and ruling Britannia.

HOW DID YOU END UP BREWING IN CANADA?

My wife, Natalie, is originally from Vancouver so we decided to make the move back in 2014; when we arrived, I met one of her close friends who had always wanted to get into craft brewing.

We live in a unique area called Steveston, which is a fishing village right on the Fraser River. We felt the area was missing the presence of a local craft brewery, so one night after enjoying a few local brews we decided to go ahead and open Britannia Brewing Co.

IS THE NAME BRITANNIA BREWING CO A REFERENCE TO YOUR COLONIAL PAST DOWN UNDER?

When we were looking for a name for our brewery we wanted something that resonated with the locals; the Britannia shipyard is located right on the river in our area and is the oldest in Canada. I also enjoy the name as it ties to home and one of the Britannia ships sailed convicts to Australia.

WHO ELSE IS BEHIND THE BREWERY?

I established Britannia Brewing Company with two partners, Lloyd Kinney and Kyle Brailean, who help with the day to day running of the business.

YOUR FATHER, BLAIR HAYDEN, BOUGHT THE LORD NELSON IN 1986. WHAT WAS IT LIKE GROWING UP AT THE LORD?

I have a lot of great memories growing up at the “Lord”, from skateboarding hundreds of laps around the bar, hanging out in the cellar and learning to brew. So many amazing people have worked there and been customers that it was always a constant learning experience.

WHAT KIND OF WORK WERE YOU DOING AT THE LORD NELSON?

I was overseeing the brewing operations and sales as well as being involved in day to day running of the business.

ARE THERE ANY MAJOR LESSONS YOU LEARNT WHILE AT THE LORD NELSON THAT YOU’VE TAKEN WITH YOU TO BRITANNIA?

Definitely on the hospitality side of things, bringing some of the Aussie charm with the relaxed atmosphere that only Australian pubs deliver.

Some of our original beer recipes took inspiration from beers like Three Sheets and the gentle balance of malts in Nelson's Blood.

HOW ARE YOU FINDING THE LOCAL BEER SCENE?

The beer scene in Vancouver is booming, some very high quality beers coming from this part of the world. Local hop production has ramped up and we are a few hours away from Yakima Valley.

HOW DOES IT COMPARE TO YOUR EXPERIENCE IN AUSTRALIA?

Craft beer is much more ingrained here with it being very hard to go anywhere without finding a good selection of local craft beers on tap. Vancouver also has a higher acceptance of different beer styles, for example sour beers, bottle conditioned wood aged beer, Vermont style IPA, saison are all styles that you would find on tap in a local bar.

IS THERE MUCH KNOWLEDGE OF AUSTRALIAN BEER WHERE YOU ARE? DO MANY PEOPLE KNOW ABOUT THE ROCKS OR THE LORD NELSON NAME?

Overall, I would say the knowledge of Australian beer is limited, but the one thing that is putting it on the map in the craft beer world is Galaxy hops.

A lot of Canadians know Coopers and I have met a few who have been past the Lord Nelson and enjoyed their ales.

WHAT ARE THE TOP BEER TIPS YOU HAVE FOR THOSE WHO VISIT YOUR PART OF THE WORLD?

Number one would be to visit Britannia Brewing Co in Steveston for a flight of our beers and a killer burger.

Four Winds Brewing in Delta is a must with amazing bottle conditioned oak aged beers. Mt Pleasant is home to quite a few really awesome breweries so a walking brewery tour around there is a great way to spend an afternoon.

HAVE YOU AND BLAIR TALKED ABOUT DOING A BRITANNIA AND NELSON COLLABORATION NEXT TIME YOUR HOME?

Yes, I am very keen to get something brewed together. Some ideas have been a wild saison or Vermont IPA with Aussie and West Coast hops. 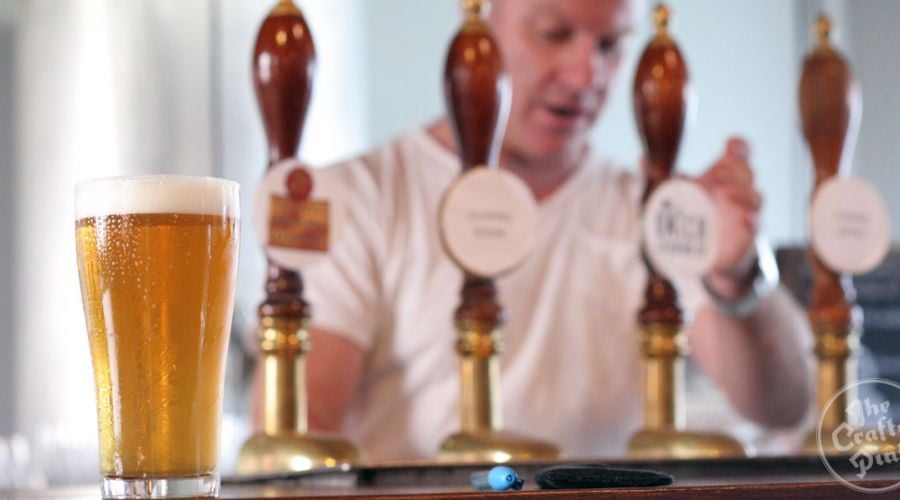 After years of challenges and hurdles that would have forced others to give it up, Steve Drissell is finally set to open his Glebe brewpub Staves. Nick O traces his tale from illness-inducing home brews to 12-tap venue. read on