Way back when we launched the Crafty Crawl series, it started out on one of Melbourne’s most iconic tram routes: the 86. And, while it's doubtful you'll find many public transport routes with such a plethora of good beer venues as that one* anywhere in the world, it's not the only line in Melbourne worthy of exploring with Myki in hand.

Longtime Melburnians will know Route 19 as the route that takes in some of the city's best live music venues, old and new.  Some of the venues highlighted along this Crafty Crawl do indeed throw all kinds of music into the mix, but the strip is increasingly finding favour with straight up craft beer purveyors too.

With that in mind, settle in, sit down or hold on and enjoy the best beer stops to be found via the 19 Tram. And, while it works as well in both directions, we're starting in Coburg and heading into the city.

Stop One: The Woodlands Hotel

Classic pubs don't come more characterful than this neighbourhood local. Coburgans [Coburghers? – Editor] past and present have been calling The Woodlands home since 1856, which makes it the oldest pub still operating in the area, evidence of which can be seen throughout via the expanses of exposed brick and majestic arches visible from the front bar. Meanwhile, the courtyard outside speaks of the abbey that once stood here, owing to its gabled roof.

As historic as The Woodlands appears, today it embraces the youthfulness of the city's craft beer culture. In 2011, Hayden George took the place over, gave it a somewhat psychedelic reboot, and turned its taps to the very best in Victorian craft beer, with the quality of the beer offering matched by the food.

The likes of Bridge Road, Dainton, Bad Shepherd and Two Birds regularly grace the lines, with plenty of rotation and a healthy bottle and can lineup to boot. Punters can even enjoy a generous happy hour from 4pm to 6pm every day besides Saturday, although we suggest not getting too carried away given what lies ahead...

Many craft beer fans would have first become acquainted with the venue at 581 Sydney Road late in 2016, when it became the home of gypsy operation BrewCult. While both bar and brewing company ceased operations last year, it wasn’t long before a new craft beer haunt stepped in to fill the void.

The site is now the home of Miss Moses, run by craft beer industry stalwart James Knox and his partner Paige. When the pair took over the bar, they stripped back the interior, refurbished the beer garden and kept the former occupant’s devotion to good beer intact. They also spread that love of local beer to the worlds of wine and spirits and created a menu that’s centered around tasty sandwiches.

It’s become a particular favourite of locals who you can see filing in for half price tinnies each afternoon, selecting new beers from a particularly impressive fridge selection augmenting the rotating lineup on tap.

Four stops closer to the city (and across the road) is where you'll find James, Paige and Miss Moses.

The third stop along the Route 19 Crafty Crawl is without a doubt the hardest to find, but find it you should. What was once a Greek wedding reception room has been transformed into a craft beer-centric music venue. Here, you're just as likely to find Mismatch's pomegranate sour as you are PBS Radio turning up to shoot footage for a Melbourne music documentary.

Like the Mallard stage, which is regular graced by both local and international performers, so too are the bar’s inner north neighbours likely to be pouring alongside more eclectic international guests.

Insofar as music goes, The Spotted Mallard has punk going on well beyond its fridges (along with other styles of pub-friendly rock 'n' roll). Live music is, of course, a big part of Sydney Road life, but this place embraces music culture as much as it does the craft beer movement. And, if music isn't your thing, the balcony, replete with a sweeping view of Sydney Road's gorgeous architecture, provides the perfect spot to enjoy another cold pint or two.

It's Stop 22 and 314 Sydney Road you're looking for this time around.

It's a mere one tram stop – and a short walk off the main thoroughfare – to find the fourth stop. Part bar, part live music venue and occasional cinema, Howler’s sprawling open-roofed interior is a unique addition to not only this Crafty Crawl, but also to Brunswick’s bustling bar scene. Almost every night of the week the bar plays host to musicians, actors, comedians and public speakers while steady streams of droolsome burgers make their way out of the kitchen.

When it opened, the Howler taps weren’t too much to get excited about, but age has done wonders to the venue as it has embraced a growing number of local breweries. Moon Dog and Mountain Goat now regularly appear on its taps and a peak behind the bar reveals a fridge jam-packed with a vast selection of styles from Australian and international brewers to satisfy all tastes, from stouts and sours to New England IPAs and lagers.

Workshop has long acted as a corner haunt for anyone looking to escape the chaos of the city. The light filled bar and its plant-heavy balcony buzzes each day and into the night with those looking to wile the hours away while enjoying whatever dulcet tones might make it out of the speakers. That said, for years there were limited options regarding what beers you could enjoy, before, over time, a change started to stir.

As 2017 drifted into 2018, the classic old venue underwent a slight refurbishment – with slight the key word. It’s still filled with light, still has that classic balcony and Jurassic 5 can still regularly be heard inside. Without changing the nature of the bar, what the refurb did achieve was to create more space, put in a few new tables, and – most importantly for readers of this site – focused the bar more directly than ever before on local beer. Melbourne breweries now take up most of the tap space, while a well stocked fridge is lined entirely with options from interstate and overseas.

You'll probably be ready for a bit of a breather at this point, so settle in for a ride all the way to Stop 5 then head to 1/413 Elizabeth Street. If you're keen on breaking up the trip, there are more options below.

Hop back on the 19 one last time to reach stop six of this Crafty Crawl: FiftyFive. If you were once upon a time a fresh faced traveller or newcomer to Melbourne, you might be well acquainted with FiftyFive in its early days as a combined internet cafe and slightly divey late night bar. Until fairly recently, just two taps poured your choice of beer and cider, while the fridges stocked an array of beer as random as FiftyFive's grungy furniture.

In recent times, however, both sides of the bar have received a refresh; the computers with their sticky keyboards have all gone, the furniture has been updated and the beer fridges are now stocked with everything from Hawkers' core range to Knee Deep bombers perfect for sharing. The number of taps has tripled too, with the likes of Dainton, Hawkers and Moon Dog featured alongside longtime house favourite, Monteith's apple cider.

Don't be at all surprised if you find the evening quickly becomes the early morning here, for it is dangerously easy to sink into the cosy couches with a Hawkers stout in hand. In keeping with the musical undertone of this crawl, the music here is often loud and pumping – with disco, house, hip hop, reggae and UK bass featuring heavily. FiftyFive's close proximity to Night Network trams and trains makes it the perfect final port of call too.

As the name suggests, Fiftyfive is found in the basement at 55 Elizabeth Street in the CBD; tram Stop 2 is your nearest.

Other nearby places of note

Himmel Hünd, Foreigner (pictured) and Inner North are all within walking distance of Sydney Road, in Brunswick, and are so close to each other they form their own mini-Crafty Crawl.

* Such has been the growth of good beer venues along the 86 tram that we'll be revisiting that original Crawl and turning it into a two-parter in time for Good Beer Week 2018.

You can check out other Crafty Crawls from around the country here too.

About the author: Graham "Stoutwhiskas" Frizzell is a legally blind beer writer and brewer in the making. You can find his beer writings at Blind Taste Test. Additional input by Will Ziebell. 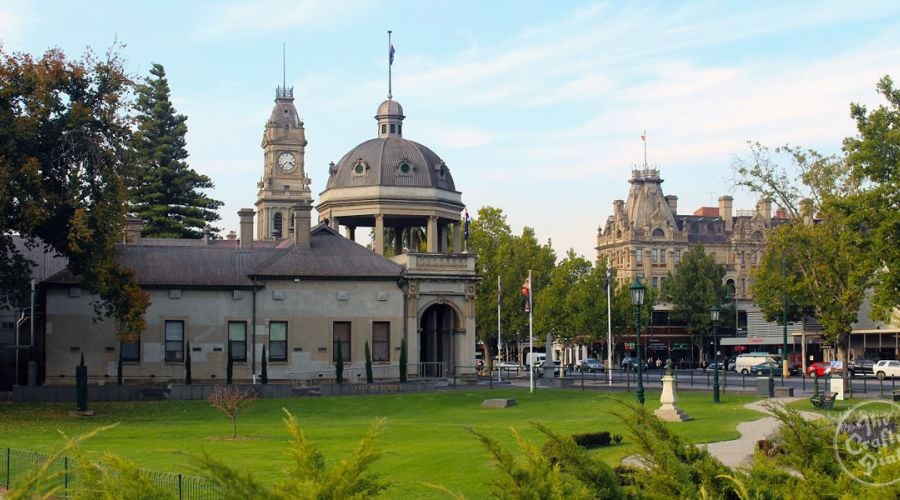