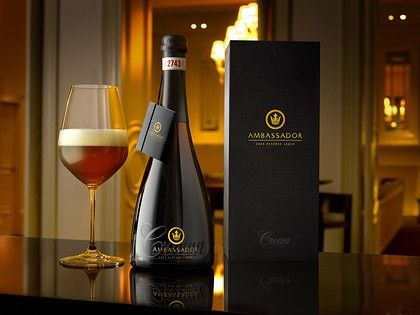 Brett. A good Aussie name. One you could imagine belonging to a larrikin. The sort of larrikin who’s generally a pretty good sort but might gatecrash the odd party. And when he does, it’s 50/50 if he’ll prove the life and soul or turn it into a disaster.

Which is pretty much how Foster’s master brewer John Cozens describes the state of play with the 2010 Crown Ambassador. The $90 a pop Reserve Lager was released last month to great fanfare – number one of 7,000 limited release bottles was delivered to the Queen at Buckingham Palace – only for the horns to be muffled somewhat by Willie Simpson. The respected beer writer and Tasmania-based brewer wrote in his column for Fairfax that the beer appeared to have its own gatecrasher called brett, or brettanomyces to give it its full name. It’s a wild yeast used by some Belgian brewers to make sour beers like Lambics and gueuzes, but feared by most winemakers and brewers who don’t want those characteristics in their beers.

Foster’s said he must be mistaken as they’d carried out extensive tests throughout the making of the 2010 vintage (the third time they’ve made their flagship Crown Ambassador) and found no sign. But, having carried out further tests since the article was published, the company now admits he was right.

All well and good, you say, but why is this of relevance to a craft beer site, given Foster’s is anything but? Well, Crafty got dropped in it by a mate whose bottle of Ambassador they’d tasted and spoke to online news site Crikey! about the beer, stating it seemed Willie was correct and there was something seriously amiss. As a result, John Cozens called once the results were in.

“Yes, we can acknowledge there’s some brett in there,” he said. 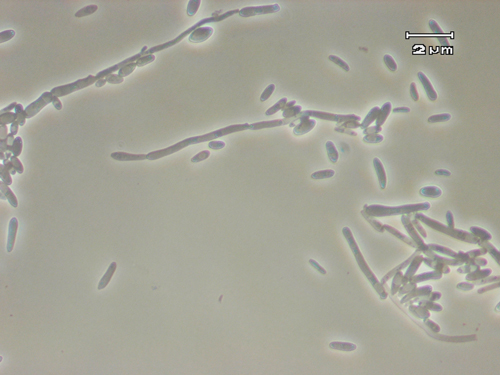 The offender: brettanomyces. (Image from lambicandwildale.com)

Turns out they’ve looked in every nook and cranny to find its source and given everything from the yeasts used in the brew to the bottling line the all clear. The one remaining suspect – the oak casks used to age a small amount of the 2009 vintage that was then blended into this year’s – is beyond testing. Why? Some of the 2010 vintage was put into them with the intention of being blended into next year’s Ambassador so even if brett wasn’t there beforehand, he certainly is now.

So, how’d it happen – how did an unwanted infection get into Foster’s most expensive beer?

They’re not sure. It was tested many times during production and no one picked it up, no test identified it.

“It’s like looking for a lady in a red hat wearing a blue dress,” says Cozens. “You sample the beer and go looking for it and may or may not find it.”

After Simpson’s article appeared, they called in a couple of specialist wine tasters who would be familiar with brett. They didn’t identify it either. (It should be pointed out that, along with the alcohol, it was the dominant characteristic of the beer when Crafty and a couple of other amateur enthusiasts tasted it around the same time.)

“We’re trying to build layers of flavours,” says Cozens, repeating his earlier comments about the wetness of the fresh hop flowers they hand-picked for use in the brew and the effect that might have had. “We get asked, ‘What style did you try to make?’ and the answer is we didn’t set out to make any kind of style. We set out to take Crown lager ingredients and add Galaxy hops, crystal malts and high alcohol to create something that was a bit special.”

With a mystery guest now in the house, he adds: “This year it will be closer in style to the Belgian gueuze or Lambic beers.”

So what happens now?

Foster’s will be saying nothing publicly, other than speaking to the likes of Crafty and a few other interested parties. The beer remains on sale and they’ll begin thinking about what to do for the 2011 vintage, given it’s highly unlikely they’ll be blending in any of this year’s (although it would be intriguing to see them launch a specialist sour beer arm).

“It’s a feature of this year’s beer,” says Cozens. “It was uninvited. Whether it turns out to be the life and soul or something we really didn’t want to walk through the door we’ll have to wait and see.”

At a recent Ambassador tasting, a guest brought along the Simpson article. A show of hands for the room’s favourite out of the 2009 and 2010 vintages was evenly split, according to Cozens. This is perfectly feasible. One reason you won’t find ratings on The Crafty Pint is that everyone’s palate is different and what one person can’t stand, another may enjoy. Just last Saturday, we cracked a four-year-old Crema coffee beer in which it turned out oxidation had taken over. The result was a sharp, acidic, Sherry-like drink, yet two of those present said they would still drink it (admittedly one of those would drink anything….).

We’re not here to bash anyone just because they’re a large brewery and knock out commercial lager – we just focus on the other side of the beer coin. So, credit to Foster’s for starting to make these crazy, expensive beers once a year, whatever the motivation behind it. As Cozens admits: “We put ourselves out there into the world of those guys that don’t have a pasteuriser and don’t try to make a standardised product. We’re back in the kitchen with pots and pans and cooking up something of our own making.”

That it didn’t work out this time shows even the big boys are fallible. It also highlights what a great job the microbreweries that are knocking out big beers without faults are doing on their tiny budgets and comparatively basic equipment.

Saying that, it’s a major embarrassment for Foster’s – at least among beer aficionados who care about such things; the majority of Australian drinkers and the Ambassador’s main target market are quite probably not interested in how the beer ends up and buy it instead because of what it stands for. Cozens says it’s been a bigger issue internally: “People say, ‘What happened?’ and we say, ‘Nothing really.’ This is what it’s like. You can’t protect against these things; we can only do our best.”

What’s more, given how noticeable the brett character is in the beer from the moment the bottle is opened, it seems extremely odd that it wasn’t picked up by anyone or any test at any point in the production process, especially given how much Foster’s invested in it and its marketing.

And it could have a negative effect on the market that The Crafty Pint really cares about. Namely, if someone buys a bottle of the 2010 Ambassador to share with friends who may have heard about the craft beer revolution but had never sampled anything outside their comfort zone, what message does it send? Sure, an unbalanced 10.2% sour beer is going to raise eyebrows, but is it going to colour their opinion of what craft beer is all about – especially when they’ve paid $90 for the pleasure?