This crawl first takes you through the quiet leafy streets between pubs in Rozelle and Balmain and, as you find yourself gazing at pretty little terraces, you can almost smell the silk of the QCs and Scrooge McDuck style money silos of the merchant bankers who reside within. But it wasn’t always like this, oh no.

When the area was finding its feet in the mid-to-late nineteenth century, the only time anyone of means would dare step foot onto the peninsula would be to ensure their hired goons had successfully beaten the shit out of the trade unionists.

Luckily for the residents of today, the working class tended to drink a lot of beer to forget about their terrible lives. As a result, the entire Leichhardt area is practically (or maybe literally, who knows? This isn’t The Crafty Theodolite) sinking under the weight of nineteenth century pubs. And, in even better news, in recent times a select few establishments have supped from the demonic chalice and pledged their souls to the Dark Lord of Craft Beer.

We start our odyssey in Rozelle at the recently refurbished Native Rose Hotel on Victoria Road. In conjunction with the Rocks Brewing Co, the new owners have given the old girl a makeover worthy of RuPaul. Gone are the Tooheys/Lion/Kirin tap contracts and questionable patrons – now you’ll find 14 taps of pure independent bliss and unnecessarily attractive families.

You can snag yourself cheap as chips pints of the Rocks core range or beers from fellow locals Australian Brewery and Shark Island among others. They’ve also gone and installed a little bottleshop with an impressive bottle and can list for drinking in house or takeaway.

The Native Rose food menu is essentially the Triple J Hottest 100 1997 CD – absolute nonstop, classic bangers. Plus there’s a goddamn salad bar. A salad bar! In 2018! What a time to be alive.

You’d be forgiven for not wanting to leave but, come on now, we didn’t go to all this effort to carefully curate a list of geographically proximate venues for you to just stop at the first bloody step.

Pop your way around the corner a bit down Evans Street and you’ll come to the Welcome Hotel. Named for its first publican, Dierdre Welcome [check source on this], there’s 15 taps dedicated to good beer focusing mainly on breweries around Sydney: Yulli's, Wayward, Akasha and the like.

What sets The Welcome apart is the general fanciness of the food. Since reopening as a fine dining space in 2014, The Welcome has picked up multiple awards for best pub food plus a hat or two; this might be the only pub in Australia where the pasta isn’t appalling.

If you’ve planned to sit in for a bit and have a nice meal, then there’s a huge wine and bottled beer list to accompany the taps and knowledgeable staff to help match your drink to the Sardinian cuisine. Alternatively, if you’re going to sit out the back in the beer garden, on weekend evenings there’s the recently installed Argentinian style BBQ slinging out whole BBQ’d chooks! Just get there already, dammit.

OK, yes, that hill is a little bit brutal but, come on now, it’s not that bad! The Solotel Group-owned Sackville Hotel has sat proudly up on Darling Street for more than 130 years. Smack bang in the middle of Tigers territory, it wouldn’t be out of the ordinary to see Benji Marshall smashing schooeys or Wayne Pearce frying chips.

(I can neither confirm nor deny that it is also the local haunt of the much maligned Sackville-Baggins. If indeed spotted, under no circumstances should you let Lobelia Sackville-Baggins talk you into some hair-brained scheme to reclaim the headship of the Baggins Family. Frodo owns Bag End fair and square. LET IT GO, LOBELIA.)

Anyway, once inside, don’t be put off by the giant copper Brewery Fresh® Carlton Draught taps and tanks as there’s a rotating list of eight crafty taps and plenty of tinnies in the fridge. If you can, take full advantage of the cheap tasting paddles on Saturday afternoons.

There’s heaps of room inside, plus a garden bar out the back to enjoy that afternoon sunshine. You’ve got steaks, burgers and salads if you’ve somehow managed not to rupture your stomach at this point. If this is your last stop, the drive-through bottleshop attached to the side of the pub also has an incredible range of excellent booze – quite possibly the best drive through bottle-o in the city.

Look, The Crafty Pint won’t lie to you. East Village is about two-and-a-half kilometres from The Sackville Hotel. Certainly doable for most people but, if we’re being completely honest, there really wasn’t another crafty venue between them to break it up a bit. If the half hour walk is simply too much, it’ll be a very cheap ride with any one of the ride sharing/taxi companies, assuming they don’t get the hump when you tell them you're only popping down the road.

The East Village Hotel, like the rest of the pubs so far, has risen, phoenix-like, from the ashes of a run down local boozer, emerging as a bright and welcoming pub. The shift away from pale industrial lagers came a little earlier in East Village’s case, during a five year long stint as a Belgian Beer Café. Now it’s out with the Hoegaarden and in with the Fixation. All 13 taps are pouring delicious crafty goodness and there's a good range of bottles and cans in the fridges.

East Village has three distinct areas to suit your mood and the time of day: there’s a well shaded beer garden, a dining room and an extremely cosy front bar complete with working fireplace.

While not quite as fancy as the Welcome, when it comes to tucker, East Village really holds its own. The usual suspects are joined by the likes of Madras lamb shanks, Spanish seafood stew and a bloody great bucket of mussels. There is literally nothing in life that cannot be solved with a pint of Pacific Ale and a kilogram of mussels.

Walk down that hill and jump on that ferry from Balmain East to Barangaroo. Boating is the best and most fun form of transport and it’s not particularly close. What could be better – after ingesting one steak, half a dead chook, two burgers, a kilogram of molluscs and several beers over the course of the last five or six hours – than the gentle rocking of a ferry?

If you’re reading this as a visitor to this fine City of Sydney then welcome to Barangaroo and Darling Harbour, one of the jewels of Sydney’s glittering crown. However, If you’re a local, looking for a few new places to visit, we’re very sorry. The beers will be good though, we promise.

Opening in late 2015, the Sydney outpost of the Beer DeLuxe family does pretty much exactly what it’s been doing at its famous Federation Square venue since 2008, walking that very fine line between servicing the beer geeks and not terrifying the normies. So, while there are plenty of familiar faces in the mould of Squire's, Little Creatures, 4 Pines and Mountain Goat, there’s also much local independent beer to be had from the likes of Ekim, Philter, Capital and even old favourite Lord Nelson. The venue also boasts its 150-strong Beer Bible so there’s bound to be one or two little gems you’ve been meaning to get your filthy paws on.

For a feed you’re looking at the prospect of pizza, burgers, fish and chips and a range of snacks made to be eaten with one hand because, unfortunately, once you have a beer in your hand it’s actually illegal to put it down to eat. Beer DeLuxe doesn’t make the rules, folks. But they do enforce them, so strap some bail money to your person just in case.

Beer DeLuxe has made a concerted effort to capitalise on their really very lovely position on the harbour so everything seems to look out over the water towards Pyrmont; thus, on a warm, sunny afternoon, it’s very bloody pleasant. Even if there are giant swarms of tourists taking landscapies*.

For those with little knowledge of the history of craft beer in Sydney, it would be easy to dismiss the location of our final stop. In 2004, the space All Hands Brewing House now occupies was a James Squire Brewhouse. At the time, it was one of only a handful of places in Sydney where you could have a beer within sight of the brewery itself. While the venue has changed ownership and names another three or four times since, it remains a space to grab a quality beer within sight of the stainless steel from whence it came.

Following the latest and most significant refurb – out went the original brewhouse, in came something far grander – All Hands have got ten of their own beers on tap plus a few lagers from the big blokes for when an 18 IBU nitrogenated cream ale is just too much to handle. They rotate a few of the beers through the handpump too so make sure you have whatever is on there because handpumps are shit hot. Oh, and also make sure to have a crack at the Irish Sport Stout. The addition of a little bit of soured beer adds a certain je ne s'ais quoi.

The mammoth kitchen down in the bunker-like rear of All Hands leans towards smoked meats, snacks to share and seafood, so if you’ve followed this crawl from day dot there’s a good chance the mere sight of a plate full of brisket will be fatal; vale [insert your name here]. Actually, no. Stop being a big sook and just eat some goddamn food. What could possibly go wrong?

All Hands Brewing House is at 22 The Promenade, King St Wharf.

You can view all of our other Crafty Crawls here. Or download our app from here – free! – tap the map icon and got for your life.

* It’s like a selfie except you aren’t in it. The South West of WA has long been a hotspot for local breweries. These days, you won't struggle to find quality bars and bottleshops supporting the brewers of the region and further afield. read on 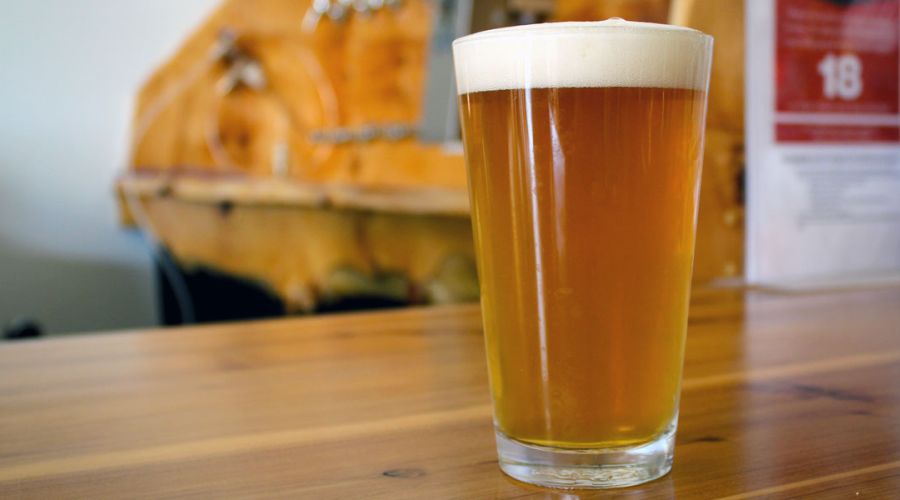 As the fifth Brewoomba approaches, we take a tour of the best beer spots in Toowoomba, the regional city that's welcomed two new breweries and another crafty venue in the past 12 months. read on