Plenty To Crow About

Given his brewery had only been operating a month, Craig Wealands thought long and hard about sending a keg of his Vanilla Milk Stout off for judging. Sure, he reckoned it was a pretty good beer, but the Thirsty Crow – a family affair he’d opened with his mum and dad in his hometown of Wagga – could also do with the money he’d make from selling it over the bar. A few weeks on, he’s pretty glad he sent it down to Melbourne.

The beer picked up the trophy for Champion Hybrid at last Friday’s 2011 Australian International Beer Awards, the only one awarded to a New South Wales brewery – and one heck of a way to put the brewery and restaurant on the craft beer map. The first milk stout he’d ever made, it features vanilla from Madagascar that was added “a little at a time” until reaching what the judges clearly feel is a nigh on perfect beer.

“I was stoked,” he says. “I’m still stoked that we got something like that. It’s a pretty big thing for a brewery that had only been open a month when we sent the beer in.”

In many ways, it’s merely the icing on the cake for Craig and his folks, Kevin and Carmel, as the Thirsty Crow has been “going flat chat” since opening earlier this year. Combining brewing skills honed at Sunshine Coast alongside Ian Watson (now at Murray’s) and then at the Hunter Brewing Company with “craft pizzas' (more on that later) in a venue in which every seat in the house offers a view of the brewery, it sold out of beer within days of opening and is only now getting close to having all six regular beers back on tap at the same time.

“We’re still getting through 30-plus kegs a week – it’s crazy,” says Craig. “In our first three days we’d sold 40 kegs. That just smashed all of our stock and we’ve been catching up ever since. At one point we were down to just one beer.”

In recent weeks, Crafty has had discussions with people over the long held belief that, while metropolitan Aussies are up for trying something new and are beginning to embrace craft beer, the real struggle starts once you move away from the big cities. We’ve been suggesting that such an argument might be doing a discredit to people in the country, implying they’re either blindly loyal to traditional brands or have such abysmal palates that they’ll never appreciate something flavoursome. The Crafty contention is that if you put a good beer into pretty much anyone’s hand they’ll enjoy it, so it’s great to see the Thirsty Crow eliciting that kind of reaction.

“I’ve had so many people say that this place has ruined them to go anywhere else,” says Craig. “They can’t enjoy a beer in any of the places they used to go to. Hopefully it lifts the game of other pubs and encourages them to take good beers on.” 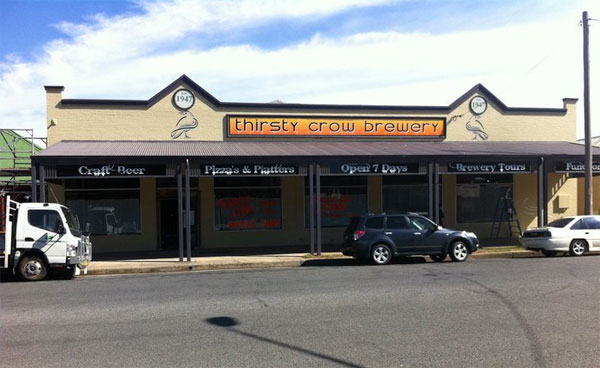 As for the Thirsty Crow, it’s housed in a former wholesalers spotted by Kevin Wealands after they’d “been in every building in town” and features a 140-seat bar overlooking the 500l brewhouse. Aside from beer, it offers brewer guided tours, local wines and the aforementioned “craft pizzas”, antipasto and cheese platters.

“I used to make these pizzas at home,” says Craig. “There’s one that’s a Sunday roast one with gravy as the base and potatoes and everything. Everyone does ‘gourmet’ pizzas but these are different, far and away not gourmet pizzas!”

Aside from the trophy-winning stout, the brewery picked up a bronze medal for its light beer. Elsewhere on the lineup you’ll find the likes of a kolsch (their biggest seller), an English bitter and a US style pale. When they opened their doors, Craig was keen not to push drinkers who had never experienced anything other than the mainstream commercial beers in their local bars too hard, hence the kolsch and an ESB with restrained bitterness. Yet the first beer he gave free rein to, his US Pale, has proved the second most popular, suggesting again there’s an appetite for full-flavoured beer wherever you go, as long as it’s well made.

Looking ahead, there’s no shortage of ambition. He feels if his Hefe had done better in judging he’d have been in with a chance of one of the main exhibitor trophies. In the wake of an awards dinner that saw five trophies head to WA, he’s setting his sights high:

“I’m coming after Feral!” he says.