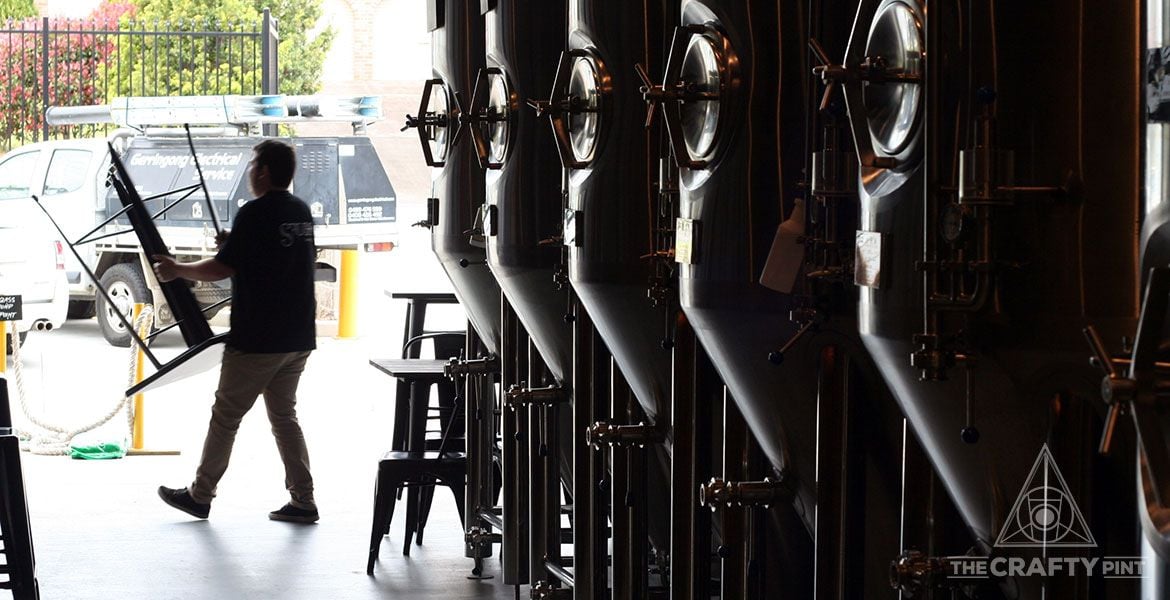 “I dumped my first beer today,” Andrew Prosser says, gesturing towards a now empty tank in the brewery he's just opened in Gerringong.

“It was an oatmeal stout. It wasn’t awful but it wasn’t what I wanted. I don’t want to trash our name straight up.”

There’s something oddly reassuring about a brewer who tips out a beer, let alone admits to it. After all, it costs to produce regardless of whether it ever gets sold. Money. Time. Sentiment. All down the drain.

There must be a mighty temptation to just let it slide, to convince yourself a beer isn’t that bad, to sell it quietly and get some cash flowing in. Particularly when you’re new to the industry and could, maybe, don the cloak of naivety and get away with the odd quality infringement. People tend to be a bit more forgiving when you’re trying something for the first time. That’s what makes Andrew’s decision so salient.

He has no commercial brewing experience whatsoever – not volunteering at another brewery, not as someone’s apprentice, nor as a gypsy – yet, under the Stoic Brewing banner, he now commands a 1,000 litre brewhouse and a phalanx of fermenters in a town with no credible craft beer scene. From homebrewing to this.

On paper, in a fast maturing and increasingly competitive industry, it seems a worryingly bold move. But real actions – the simple twist of a lever to send your beer spilling down a drain – give ample cause for confidence.

“We like beer and we wanted to serve it,” Andrew offers as his refreshingly simple reason for wanting to get into the industry.

“We were just going to do a craft beer bar and get in other people’s beer, but that fell through. Then dad bought the unit.”

Family, as becomes apparent over the course of this visit, is the thing that drives this place, a fulcrum by which everything functions.

Almost on cue, Andrew’s father-in-law wanders in, leaving a couple of wet footprints from the few remaining puddles of oatmeal stout. He’s come to borrow some glue and a drill. Andrew has neither at hand so he offers the next best alternative.

To have a building in which to start a business is one thing. To have permission to do so is another entirely. As ever where alcohol is concerned, local licensing presents unique challenges and, in this case, a quite unexpected outcome. Long story short: if they wanted to sell alcohol where they were they had to produce it. If they wanted to sell beer, they were compelled to start a brewery.

“I’ve been in a craft beer club for ages where people always talk about starting a brewery. We had the chance to actually do it.”

The space is one of six adjacent units in what passes for the industrial side of Gerringong. The town is a short drive south of Wollongong and, as a sign on the approach helpfully points out, home to some 5,000 people. It’s a lovely little seaside settlement blessed with a gorgeous beach and a quite majestic outlook. It has the kind of easy-going and idyllic vibe that would make you want to move here and raise kids. Or at least spend the summer.

Many do. These are the people upon whom Stoic’s fortunes will be dependent and Andrew is catering to them accordingly.

“Gerringong hasn’t really had much of a craft beer scene”, he says.

“I had to come up with an easy range, if that makes sense, so all my beers are quite, well… it’s not like they don’t have flavour but they’re not as out there as maybe a brewery in Sydney, because they have the market for it. As a brewer you want to do interesting stuff, but as a business you have to do this and do interesting later.”

As if to demonstrate the internal battle between personal taste and pragmatism, Andrew pours a glass of his Session Ale, a 3.9 percent ABV beer more broadly categorised as a golden ale. It’s light, finely balanced and there’s nothing at all wrong with it. But Andrew has become his own harshest critic.

“I can’t brew anything without flavour, but it kills me a bit to drink that one – I just want to put more hops in it! But [there are] guys already struggling with the fruitiness. I reckon all the other beers are better, but that’s what they’re drinking.”

They’re getting through it at a good rate too. In the first five weeks, he poured a thousand litres of the session ale alone, respectable volume for a new brewery that’s done little promotion except word of mouth. It does help that word travels quickly in a small town.

“People come up to us on the street and say, ‘You know everyone’s talkin’ ‘bout ya!’ I’m like, ‘Hopefully good stuff!’ And it has been positive.”

Andrew’s dad, Steve, pulls up in a ute branded with Gerringong Electrical Service. It’s the old family business and he’s a sparky by trade, as was Andrew until a few weeks ago. He’s stopped in to charge his phone and drop off cash for the till, one of the myriad of small things he reckons he does because Andrew doesn’t. Much of the rest of the list involves cleaning. It’s all said in jest, the professional equivalent of him reminding his son to keep his room tidy.

“I’m the brewer, he’s the doer,” Andrew says of their working relationship. “He pretty much built the whole place.”

Despite being an exemplar of the Aussie bloke’s art of being laconic, Steve nevertheless manages to squeeze in the odd line on stoicism and Greek philosophy, the lamentable state of beer in restaurants and a warming excitement at where this whole brewery thing might go – ideally, a modestly sized, locally focused business that allows for the odd day off to go fishing.

They don’t plan to reach people by wholesaling their beer. At least, they’re in no hurry. They sense the imminence of summer and its flurry of visitors. They have a drink-on-premise authorisation so they want people to come to the brewery, to drink at the bar. They have a bottling line but haven’t had time to turn it on yet. For the time being they fill growlers.

The range comes in the form of a pale ale, IPA, porter and, right now, a couple of ciders. Bearing in mind this represents the entirety of Andrew’s commercial brewing output, the overall quality is auspicious.

“I really care what people think”, says Andrew of his beers.

“I got really, really pedantic about my product when I started selling it to the public. When I was brewing at home I kind of thought, ‘I’m giving it away so if it’s not up to scratch that’s fine’. But once you start selling it it’s got to be perfect, and that kind of ruined me.

"I got turned off hops. It’s a weird thing to say but, seriously, I’d smell hops and was smelling all these weird flavours out of them.

“Then I thought I’ll get some beer from other breweries and see what they’re doing, and [mine have] actually been pretty close. So there’s nothing wrong with my beer but, as a perfectionist, my brain just warped or something.”

Perfectionism is generally a trait you want in your brewer. And your electrician for that matter.

Andrew’s mum arrives. She’s preparing for her first shift on the bar and expresses some apprehension about serving customers. Other than that her general manner is ebullient, suggesting the nervousness is out of place. By virtue of having the best handwriting in the family she’s given a marker pen and the task of populating the events board – a list of musicians and food trucks due to appear at the brewery over the coming month. It’s been doing its job so far; one food truck operator reckons they sold more in an afternoon at the brewery than at Wollongong’s much higher profile Eat Street markets.

The food trucks are especially helpful since the brewery has no kitchen. Isn’t allowed to, in fact. Any food they themselves serve has to be packaged. Given their region is home to an array of producers, it's not the worst scenario. A bit of local cheese, some cured meat, a few condiments and you’ve got a DIY platter.

Andrew’s sister arrives and the brewery has officially adopted the feel of the Prosser family living room. She catches up on the latest and takes photos of the updated events board. They haven’t done any traditional advertising so she’s going to start playing around with the social stuff. Still, no hurry.

They’ve only been open a few weeks and they have customers to serve, regulars to attend to. One of them pops in for a beer most days during his lunch break. He works at a pub down the road but he still chooses to come here. And that tells its own story.

You can find Stoic Brewing at 6/45 Rowlins Road, Gerringong.