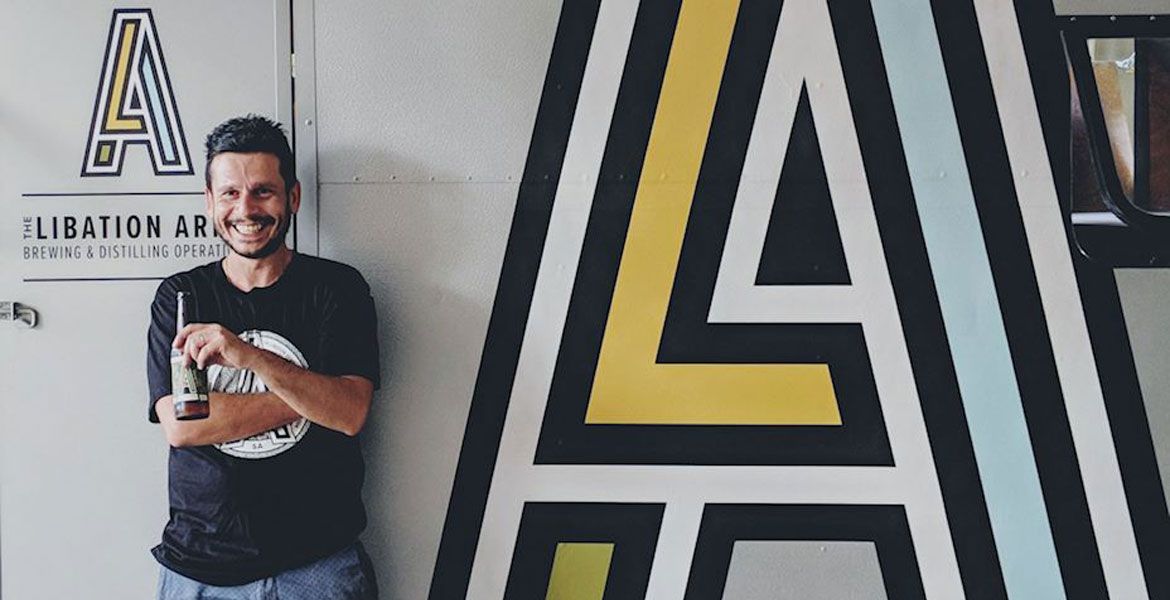 The South Australian craft beer industry is in mourning after the sudden passing of Marco Bona, owner and head brewer of Libation Army Brewing Operations. Known for his cheeky, broad grin and positive, uplifting nature, Marco possessed an upbeat aura that people wanted to be around.

Along with his wife and two boys, Marco moved to Adelaide three years ago from London, where he had worked in finance. He was of Italian descent and, before taking an interest to brewing, he pursued wine as a sommelier. The move to South Australia was initially to further develop his wine knowledge; however, after meeting Stephen Nelsen while doing a Food and Technology TAFE course, Marco’s life goals changed.

"Elation through fermentation" stands today as Marco’s catch cry; it was the way he thought about brewing. Every time a brewer or a drinker started a conversation with him, it ventured down the beer path and his passion for strong yeast characters and fermentation shone through.

Libation Army’s beers began entering the market in early 2018, gypsy brewed via the South Australian TAFE. Most of them were a little different, generally merging styles together or brewed slightly differently so as to stand out from the crowd. The first to reach drinkers' mouths were Gentle Upheaval, a 3.8 percent ABV tropical session ale brewed with an English yeast and dry hopped with New Zealand hops, and Tropical Riot, a Belgian pale ale that showcased zingy citrus hops and strong yeast esters.

Marco wasted little time getting involved in GABS, blending a peach schnapps through a big stout as a festival beer within months of launching his brewing company. Those beers were joined by a few memorable seasonal releases, including the very popular Fluffy Jeff, a white IPA/hefeweizen mash up of styles.

During the warmer months, Marco and his little army of helpers were everywhere, popping up at every festival that would allow them to pour beer. Marco and his beers arrived in style, via the Libation Army branded 1963 vintage caravan – aptly named Tinny.

The news of his sudden passing has left a giant hole in the South Australian beer industry. Marco’s spirit, fun loving attitude and warm smile influenced so many people in the beer community, leaving an impression that will linger for years to come.

So, to honour Marco and support his family, the community has sprung to life, offering their venues and kegs in aid of "Marco Hour". The call to arms has been incredible, with close to 40 companies putting up their hand to donate kegs and taps for the event.

On Friday, November 23, multiple venues and brewpubs will pour donated karma kegs as well as Libation Army beers in order to raise a glass to a great mate who was taken from us too soon. Every venue is running the afternoon slightly differently – you can find more detail via each participant's social media pages, but the money raised will be donated to Marco’s wife, Lara, and their two boys.

A massive thank you goes out to everyone that has offered support for Marco Hour. A community shows its true colours in the hour of need and the South Australian beer industry is currently aglow with technicolour lighting. The people involved in the craft beer movement in SA have always been tight knit and the response and generosity to this fundraiser has again reinforced this family like bond.

Other ways to get involved

A Go Fund Me page has also been set up for others that would like to assist in the fundraising effort and to support Marco’s family – find it here.

Libation Army will continue to operate, albeit after some refocusing and time to mourn. A message was posted on one of their social media pages, outlining what happens next for the company.

“Some of you may have heard but we at Libation Army have been suffering. We recently lost our founder and leader Marco Bona. The sudden nature of it all has made it hard to process, and only now do feel we can begin to put into words, the love we have for him, the absolute loss we are feeling and what we are going to do next.

Marco had an incredible passion and energy for craft beer. Never one to follow the crowd, he setup Libation Army to make unusual, sometimes challenging but consistently delicious brews. The goal always was to bring ‘Elation through Fermentation’. This elation was in part his, every time he made a beer and in part shared with you all when you enjoyed his wares. To Marco it was more than just beer, it was a celebration of life and he put his all into every batch. He had seemingly boundless energy and at times we felt we just had to hang on and hope we could keep up. Through it all though there was his cheeky grin and chuckle. The knowing type, knew it would get you into trouble, but you went along because the fun would be worth the sore head the next day.

Despite only being in the industry a short time, Marco and Libation Army has left an indelible mark on the local industry. As word of his passing has spread the outpouring of love and support has been humbling and appreciated. Offers of help have come in so many forms and we genuinely cannot thank you all enough.

So what now for Libation Army? We honestly do not yet know exactly. Marco was everything in the business and wasn’t exactly a great keeper of notes.

What we do know is that Libation Army will march on. We have lost our talisman and general but we will hunker down, regroup and come back. If we can’t do it with him, we will do it for him. We ask for your patience while we work out how we do it, but we will do it.

In the meantime if you see our beer around, know that it’s still fresh and delicious. While you’re having one with family or friends take a moment to take it all in. Appreciate what they add to your life and feel the elation of that moment. It’s how Marco would have wanted it.

Marco will not be forgotten, but instead his message of "Elation Through Fermentation", along with his cheeky grin and bubbly, vibrant personality will be etched in the memories of the South Australian beer industry forever. On November 23, find your local event, grab your mates, buy a beer and raise it high into the sky, in honour of Marco Bona.

Matt King has asked that we donate his fee for the article to the Go Fund Me campaign.