Well, that was an interesting one. For our final blind tasting panel of 2018, we looked at one of the beer styles that has burst into unlikely prominence in the past couple of years: New England style IPAs or NEIPAs.

It's a type of beer that's been much debated and in many different ways. It seems that for every lover of the style there's another who can't stand them. For every commentator who believes they're here to stay as another subset of IPA there's one who's convinced it's just the latest black IPA. What's more, there's still debate as to what exactly one should be – and whether any Aussie brewers are getting it, whatever "it" is, right.

So, before embarking on this tasting with a panel of Crafty team members, reps and brewers – with beer awards and Cicerone experience within the team of six – we went beyond the usual discussion of the style at hand. As well as going over the BJCP guidelines – which you can read here – we talked about what the panelists expected or understood such beers to be, not least as those guidelines, while relatively broad, state that haze is part and parcel of such beers yet they "should not be cloudy or murky".

As the flights of three were presented, discussion continued and there were more references back to the guidelines than in any previous tasting. With NEIPAs being such a recent arrival and local examples varying widely in character and quality, perhaps this was only to be expected.

We ended up assessing 20 beers. There are more than that available in can and bottle but we wanted to keep it to a manageable level for the judges so we initially whittled the long list down as follows:

Of all beers on the market today, you'll find little – if anything – where the messaging encouraging you to drink as fresh as possible comes across as strongly as with New England style IPAs. The various techniques employed to created the huge "juicy" hop characters can lead beers to lose their impact and start to deteriorate in something of a hurry.

This needn't always be the case: we recently had cans of one hazy IPA that were more than six months old but had been kept constantly chilled from pack day and the beer was presenting great. But loss of fruity aromas and a change of colour from their typically bright yellow/gold/orange appearance when fresh to something more washed out or brown with age, particularly if the liquid comes into contact with oxygen, mean you'd be daft not to check the pack and/or best before date when shopping for NEIPAs.

So, here we endeavoured to get the freshest batches we could and fully expected to see some correlation between age and position on the final results table. We had one bottleshop manager tell us to hold off on buying cans of one beer as they knew there was a fresher one coming in time, which is a positive sign for brewers and drinkers alike.

There was also some good timing for a few brewing companies involved, with three beers packaged in the ten days before the tasting took place. At the same time, it didn't work out for all concerned, with the latest batch of one very popular beer packaged the day before, thus too late for us to get hold of it, and the examples from the older batch we'd sourced fell outside the top 12.

Before we get to the top 12, an explanation as to why we went with 12 instead of the usual ten. For one, we had two beers register exactly the same score. And, secondly, as we've done in the past, we decided to throw in a bit of a curveball, in part to see how batches of the same beer – one older than the other – would fare.

If memory serves correctly, for the first time in all the years we've been carrying out such tastings, a brewery has gone back to back. So congratulations to Sauce Brewing in Marrickville for following up the top spot for Piss-Weak in our mid-strength tasting with another for Bubble & Squeak. Admittedly, you could argue this comes with a little asterisk as this was the beer included twice after brewery founder Mike Clarke offered to send us two batches to see what difference some age would make.

Interestingly, it was the older batch that came out on top – by some distance and with all six judges giving it a good score. Whether this is due to the beer having time to settle into itself or, as one of the brewers at the table suggested, merely down to batch variance, we can't say, but the two versions of Bubble & Squeak bookended a top five in which three Victorian favourites sat alongside each other.

The three beers packaged within ten days of the tasting were The Matriarch (which the CoConspirators team reckon is their best batch to date), the Sauce beer in fifth and Smiling Samoyed's Hop Bandit. The last of these was the focus of the most debate, with the panel divided (as they were a few times, hence the long discussions that continued even after the results were revealed). For most, the beer ticked all the boxes of the style, but two brewers at the table argued that the haze and texture was yeast rather than hop derived.

The two oldest beers in the 20 made the 12 – Two Birds' Jucius Caesar and Quiet Deeds Juice Train. We should also point out that Brouhaha's NEIPA and Bacchus' JAF made the cut in the public vote but were unavailable (and in the madness of the past few weeks we forgot to order Dmango Unstrained from the latter in time after they suggested it was the nearest replacement in stock; sorry, Ross!).

So, what, if anything, can we deduce from this? As we always try to hammer home with these tastings, do take time to look for packaged on or best before dates and ensure you're getting the freshest beer you can. Good bottleshop staff will be only too happy to point you in the direction of the most recent arrivals and, if they know you're a fan of certain beers, keep you posted as to when they're landing.

It's reassuring to see most brewers are now providing one or both of a packaged on or best before date; even a year or two ago, it would amaze us how often you were expected to take pot luck when buying beers from many small local operations. The benefit of brewing such beers repeatedly also seems to be borne out by the identity of those clogging the upper realms.

It would be interesting to look at the same lineup again with different ages on the beers – there are some outside the top 12 that are highly fancied but perhaps suffered from time in trade before we snapped them up. But, as we've said in the past, there is no perfect way of doing such tastings and if we asked brewers to send in their freshest batches we'd merely be parroting the major beer competitions rather than attempting something closer to the experience of our readers. Anyway, enough writing...

It's worth noting that we didn't include any double / imperial NEIPAs.

You can find all past Getting Blind With Crafty articles here. We'll work out a lineup for 2019 tastings soon and let you know when the initial voting round is open too.

Thanks to the panelists for giving up a Friday evening and to the crew at The Terminus for once again letting us use their upstairs function room. 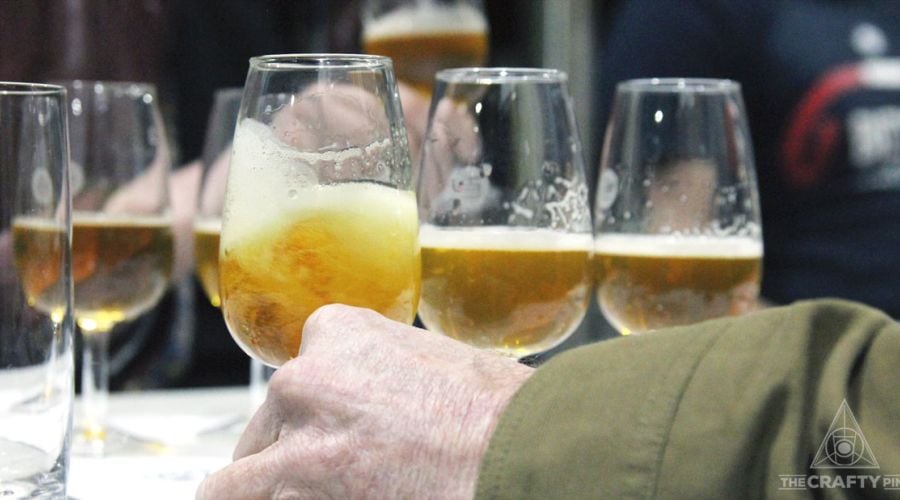