Within the ACT, 2018 has felt like a year of consolidation for the local beer industry, but also one in which brewers have been extending their reach within the community via sponsorships and events. In the wider region, however, there have been plenty of new breweries pop up – although that's a tale for another day.

We have seen BentSpoke and Capital beers become ubiquitous at the city's many popular suburban independent grocery stores such that it would raise an eyebrow if neither was on offer. Their visibility in shops, bars and the community has normalised the idea and availability of independent craft beer across Canberra.

In 2018, BentSpoke extended their sponsorship of local sporting teams and partnership in a range of areas – baseball, basketball, roller derby, cycling, the GIO (Bruce) Stadium, the Enlighten, Forage and Multicultural Food festivals plus the YesFest celebrating the first anniversary of marriage equality. BentSpoke and Bridge Road collaborated on a bike-themed beer for Wagga Gears & Beers and the former also hooked up with Wellington's Fork & Brewer in celebration of their sister city status (no earthquakes at the away event this time).

Capital's large and versatile Dairy Road venue cemented itself as a kid- and dog-friendly stay-all-day destination, more than capable of hosting live entertainment and festivals – with highlights in 2018 being the first birthday party and Grilled'n'chilled festivals. Capital also partnered with music festivals beyond the brewhouse, including Groovin The Moo, Major's Creek festival and events in Sydney, while also launching an initiative offering beer and beer experiences to community organisations.

As the biggest and most ambitious of the local brewing companies, BentSpoke and Capital also performed well in popular surveys such as the GABS Hottest 100, the Beer Cartel Craft Beer Survey, and the Out In Canberra People's Choice awards – both for their beers and their venues.

When we cast the net wide to find out who it was felt put out the best new releases in 2018, they were joined in the upper echelons by others from the local scene, including gypsy operation Pact Beer Co and Canberra elder statesman Wig & Pen, which currently faces an uncertain future after owner Lachie McOmish decided to put the business up for sale and retire.

Eight brewers from the Australian Capital Territory released 64 new beers in 2018 – a fifty percent increase on 2017. Including collaborations, there were fourteen new releases in bottle or can, with one each from Zierholz Brewery and Wild Polly Brewing Co, plus three each from StoneAge Brewing, BentSpoke, Capital and Pact.

To help find five of the best across tap and packaged we turned to 24 local drinkers – craft beer aficionados drawn from the bar and bottleshop trade, the amateur brewing community and the craft scene more generally, with many active in online forums and blogs. A first round of voting was followed by some deliberation. Drinking habits being what they are, packaged beers were more likely to be tried than taps, and core range beers more likely than limited releases. This was factored in at the deliberation stage although, as it turns out, this didn’t make any difference to the top five, which was agreed with no difficulty or controversy.

Pact's Tennent's Peak possessed more subdued hop aroma than some of the juicy hop bombs knocking about, with a solid bitterness and a smooth, malty finish. Seen in previous years on tap, Tennent’s Peak returned in July for Pact's third birthday on tap and shortly thereafter in can.

Other new releases from Pact included four collaborations: a sour fruit IPA for the Australian International Beer Awards 2018, a saison for Club Brewing, a blended pale with Wignall Brewing and the 2018 harvest release of a wet hop pale created with the Wig & Pen and Pialligo Hops.There was also the Nomihodai seaweed lager launched at GABS – all worthy but, unlike Tennent's Peak, in very limited release.

Cluster 8 is a double IPA in which a spectrum of fruit and pine hop aromas and flavours were paired with a balanced bitterness and a long resinous, caramel and malt finish.

The beer was launched as part of BentSpoke’s Drifter Series of limited release cans in September, chasing a small keg release to venues in QLD, NSW, ACT and VIC – the beer’s first tap excursion outside the Braddon brewpub. A second batch was released in December, just in time for the holiday season.

If we’d conducted the poll prior to September then BentSpoke’s Red Nut Red IPA, the beer that claimed a medal at the prestigious World Beer Cup in the US, would be listed here instead. It too made it into cans in 2018 – something the fans had been crying for since BentSpoke first started packaging beer in 2016.

Hang Loose Juice Blood Orange NEIPA, first released in April as Royal Brew for Groovin' The Moo 2018 Canberra than again in October as Hang Loose Juice, delivered orange, pineapple and passionfruit aromas. It's juicy and low on bitterness with a lighter body and drier finish than some other NEIPAs.

Despite being a tap-only release, Hang Loose Juice polled as strongly as Cluster 8 and Tennent’s Peak. In fact, all of Capital Brewing Co’s tap beers polled strongly, reflecting just how popular their venue has become as a repeat destination for our contributors. With plenty of parking and bike access, lots of space indoors and outdoors and room for the kids to play, it is a great place to hangout on the weekend … and slowly work through the taps. Cult burger joint Brodburger being co-located is surely also a factor.

Tropical Popsicle Sour is a fruited and dry-hopped kettle sour beer, with tangy tropical fruit salad aromas and flavours from start to finish. This approachable beer is likely to be the first sour beer experience for many Canberrans.

Another tap-only release that polled strongly, but very close on its heels was Capital's Summit Session XPA (on tap and in cans). Had the poll been a couple of months later, and a few more lawns had been mowed, then maybe the Summit Session XPA would be sitting in this spot.

Velvet Underground was the iconic Wig and Pen Velvet Cream Stout passed through cocoa nibs, local truffles and roasted hazelnuts in the hopinator.

Released in June for Darkfest 2018, the Wig & Pen’s annual celebration of solstice and dark beers, it may prove to be a swan song for a cult beer and a cult brewery, which closed its doors on December 21 and is seeking a buyer.

Wignall Brewery at the Pot Belly Bar in Belconnen debuted strongly in 2017 with Belco Boy’z Pale Ale making the Best New ACT Beers List. The 2018 Cole Porter was well received at Pot Belly and at the Canberra Craft Beer & Cider Festival in March, and a curry spiced version called Rogan Josh was entered for GABS, but the brewery has since suspended production to undergo redevelopment. Look out for Belco Boy’z, Cole Porter and more from them in 2019.

The ACT’s newest brewer, Wild Polly Brewing Co, contract brews gluten free beers at Zierholz Brewery in Fyshwick. The flagship Pale Ale is a sessionable ancient grains pale ale that was launched in late December, only days before our poll closed, yet still managed to pick up votes. Look out for the Pale Ale and an IPA on tap and in cans in early 2019.

StoneAge Brewing helped a local radio station Hit 104.7 morning show hosts Ned and Josh build a beer and get the idea of local beer in front of a wide and new audience, in the process making viable their own short canning run of Porter and Belgian Ale.

The show's hosts put it to their listeners to make a shower beer and ended up with the pale ale Ned & Josh's Shower Beer. Over a series of talkback segments in May and June the recipe and packaging design came together and was passed to StoneAge Brewing, who brewed locally and packaged with East Coast Canning. The beer was launched in July at King O’Malleys pub and sold via local independent supermarkets and bottleshops.

Longstanding ACT operation Zierholz Brewery packaged into cans for the first time in September, with their 5.1 percent ABV German Ale (Kolsch) the one chosen for the debut. More of the range will appear in cans in 2019. 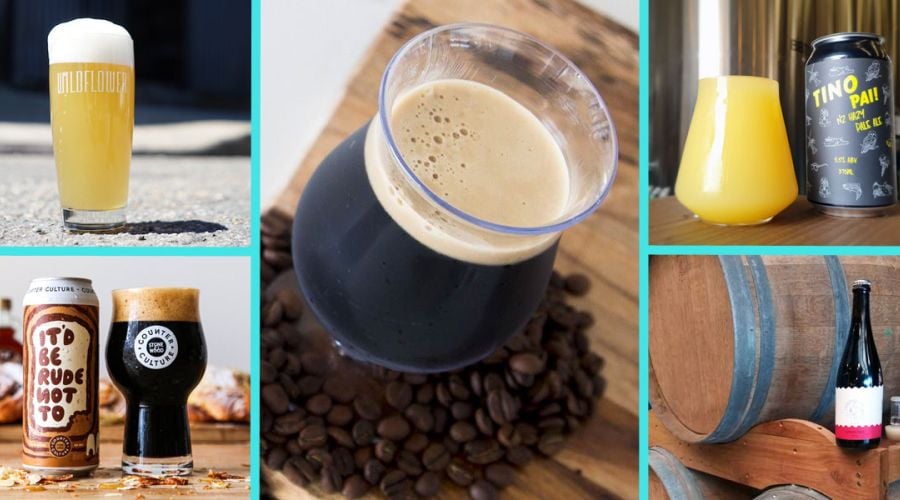