Our Man In: Blighty Pt 1

With our man in this case being Ol' Crafty himself, returning to the mother country on a trip that’s ostensibly to catch up with family, but is really to see what’s going on in the beer world.

Where have you been?
A couple of trips into London, a whistle stop visit north of the border and the East Midlands (or the bit in the middle of England that’s more to the east than the west for those who don’t know what that means. There’s a theory that the Midlands doesn’t actually exist as to people living below it everything above them is “Up north” and to those above it, everyone living south of them is “A soft southern pansy”).

Which breweries (or notable bars) have you been to?
The breweries are coming in the second half of the trip, but the recently opened Jolly Butcher’s in Stoke Newington is well on its way to becoming notable just a year after opening. Not that long ago, it was a dank, dirty “old man’s pub” that held such little appeal to the vast majority of the local population in its previous incarnation that a friend of Crafty’s who lives nearby said that prominent among his share house’s seven rules was: “Don’t ever ask: ‘Does anyone fancy going to Father Ted’s for a drink?’”.

Today, it’s part of the wave of bars across the UK embracing the best of the beer world – the long bar is lined with a handsome array of hand pulls pouring cask ales from some of the brightest stars of the UK beer scene (many of whom have only started up in the past few years) that are cosying up to some craft cider pumps and a showy lineup of craft beer taps, from the omnipresent BrewDog to lesser known newcomers like Camden Town.

We also checked out the Euston Tap, which opened to great fanfare recently in a heritage-listed building outside Euston Station. Again it combines cask ales and keg beers from all over the world, plus a bottled beer list to get the juices flowing. As for the Red Lion in Kegworth, it’s notable for being The Crafty Keg’s local – and a place where much of Crafty’s formative ale drinking was done back in the days of Â£1.25 ($2.50) pints.

What stood out?
The trip to the Jolly Butcher’s was to meet top UK beer writer Pete Brown at his local. It’s hard to imagine how it looked 18 months ago as right now it’s a place you’d happily spend much of your life. The decor’s pretty simple – wooden floors and tables, bare, painted walls, big arched windows and only minimal beer memorabilia. It allows the tap-laden bar to take centre stage, while staff are on the ball, happy to suggest a route through the beers as well as food pairings to go with them (NB the sausage platter will satisfy even the hungriest). Pete reckons the UK could handle 500 bars like this and you’d think the mood of the country would be improved in an instant if that was the case. Sadly, he reckons there are only 20 of its ilk at the moment… 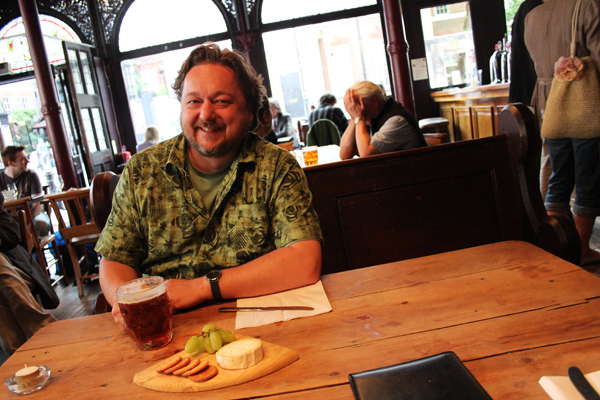 Among the cask ales pouring on the night were those from the likes of Thornbridge, Dark Star, Redemption and Acorn. The last of these was launching a beer on the night that highlighted that often it’s the quiet ones you need to watch out for. Most beer lovers Down Under will be aware of Mikkeller’s single hop IPA series and BrewDog’s take on the same, ranges of beer that set out to showcase the qualities of different hops by using just one variety in each beer. What they probably won’t be aware of is that the South Yorkshire brewery started doing the same thing more than four years ago. The aim was to brew a different single hop IPA at 5% every month. And while they never planned to keep it going so long, it seems you can’t get too much of a good thing, meaning the one we sampled was number 50. Having been through US, UK, NZ and European hops already, the milestone saw Sorachi Ace step up to the plate, a variety that’s been appearing in Aussie beers since late in 2010. It is a hop that reappeared in a number of cask ales during our trip and, being one heck of a feisty hop, seemed well suited to the gentler natural carbonation of real ales.

So: craft beer taps, Sorachi Ace hops, a host of new micros opening in just a few years… sound familiar? Just a few days into the trip and it was clear that there’s much going on in the UK that mirrors what’s happening in Australia. Admittedly, the situation is muddied slightly by the fact that the UK already had a fine ale tradition to speak of so there wasn’t such a desperate need for the revolution we’ve had Down Under, but while a CAMRA vs craft beer battle rages on in some sections of the beer world (something we’re not getting into here), these are exciting times for British beer lovers. It’s something that’s highlighted by the arrival of an unexpected guest – Evin O'Riordan of The Kernel Brewery. Another new startup based in the heart of London alongside coffee, meat and cheese producers, his bottled ales are making serious waves. Listening to his tale is reminiscent of so many craft brewers in Australia, while sampling a couple of his IPA variants, including one featuring coffee beans, is both a pleasure and a reminder that in the beer world today there are no limits to brewers' creativity.

“We were campaigning for tradition for a long time and I’m glad that we held onto that,” says Pete. “But we looked backwards more than forwards. A combination of things such as social media and the sharing of ideas around the world has brought new ideas over here. Now there’s about 70 new breweries opening every year.”

In words that will be bittersweet to the Aussie microbrewers fighting the long campaign for excise tax reform, he says much credit has to be given to former Prime Minister Gordon Brown who introduced a progressive beer duty in 2002 that made it easier for home brewers to take the step up to commercial production. As many of them took the plunge and some began taking inspiration from overseas, particularly the States, word started to spread about the exciting new brews appearing. And, while the mainstream media failed to pay much attention, online writers like Pete, Mark Dredge, Martyn Cornell and Zak Avery helped fuel a buzz that now means you can stumble into old country pubs and find a little brewery attached that’s knocking out highly hopped US style beers that would have been alien to such places a decade ago.

The Euston Tap, in its own idiosyncratic way, is doing much the same as the Jolly Butcher’s, albeit with a higher profile. The second venue opened by the team behind the Sheffield Tap, the idea is to showcase the best of the world’s beers from the most adventurous breweries. Squeezed into a squat Portland stone building outside the station with nothing but standing room downstairs and a few seats upstairs, it has 27 beers on tap at any one time, pouring from taps (literally in the case of the cask ales) lining the wall behind the bar. It’s a stunning, unique venue and one that allowed Crafty to show the friends he was catching up with for the first time in a few years exactly why beer is so exciting these days: London-brewed German lagers, US / UK collaboration cask ales, Beer Here Belgian ales and US Imperial IPAs among many others. 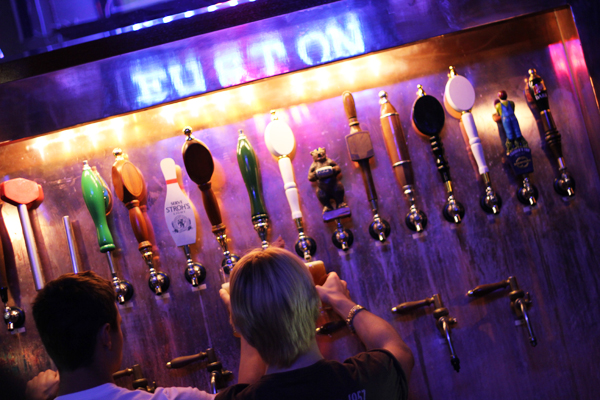 The taps at the Euston Tap

The crowd was predominantly young and not the stereotypical “sandals and socks” British ale lover of yore, again mirroring the Australian situation where most craft beer lovers are those not genetically tied to brands but instead inspired by the possibilities of this brave new world. Pete had said the night before that when the renovation of the Jolly Butcher’s was completed, some of Stoke Newington’s cool kids had bemoaned the loss of an old man’s pub (one they never actually drank in), yet once it opened and they ventured inside they became hooked and made up much of the crowd filling it every night. Their ilk seem to enjoy the Tap too.

On the other side of the coin, what also stood out was just how many pubs are now boarded up and falling apart. Whether taking a train through London or driving through Edinburgh, failed pubs are everywhere. Hundreds are closing every year. Yet those run by visionary landlords are thriving and mini-beer festivals are ten a penny. Pete’s theory is that many of those that are closing deserve to as they’ve failed to change with the times. While technology at home has moved on hugely in the past 20 years, many pubs have failed to even clean their carpets, making staying in to watch the footy or enjoy a drink with mates increasingly appealing and walking into a pub where your feet stick to the floor less so.

That said, if the beer’s good enough, there’s perhaps no need to change. The Red Lion in Kegworth has altered little in the 20 years since it became The Crafty Keg’s local. In that time, the village has seen almost all of its pubs close (there are now three compared to 11), but the Red Lion soldiers on with its ten cask ale taps, four of which rotate regularly. In its own way, it’s embracing what’s going on in the beer world, with beers from the likes of Blue Monkey appearing regularly. It’s one of many new micros thriving in a region with major historical significance in the beer world while the major breweries flounder, its beers winning awards and favour amongst the Red Lion’s stalwarts in equal measure.

Have you learnt anything you’ll be bringing back to Oz with you?
That the beer revolution is a global affair. The fact you can drink British-brewed, US style 7%-plus IPAs, Russian Imperial Stouts and unfiltered Germanic lagers alongside traditional 3.5% bitters is really quite wonderful.

Also that a combination of jet lag, amazing beers and public transport is dangerous. It can lead to falling asleep on the Tube, waking up 12 stops past your destination and then getting on a night bus heading in the wrong direction, turning a one hour journey home into an expensive four hour expedition…