Our Man In: Belgium Pt 3

As he prepares to wing his way back to Australia, Boatrocker’s Matt Houghton delivers the third part of the trilogy of tales detailing his exploits in Belgium. We assume it’s a trilogy that won’t take on Hitchhiker’s Guide To The Galaxy like proportions, although who knows where the inspiration he’s gleaned from this trip will lead him in the future…

Where have you been?
Hamoir, Durbuy, Florenville, Rochefort, Orval, Brussels.

Which breweries (or notable bars) have you been to?
After Flanders, we headed south to the Ardennes, with our first stop at a small brewery in the beautiful town of Durbuy. It’s supposed to be the world’s smallest town, but not small enough to do away with parking inspectors! Brasserie Markloff make just one beer, a biere de garde, with production approximately 300 to 400L per batch. Supply is limited to the local market. A simple beer with a strong yeast character, but one that is very satisfying, particularly with the view from their terrace.

After Durbuy, we headed further south to Orval, one of the six Belgian Trappist breweries. Located in a fertile valley, the Notre Dame d'Orval monastery in Villers-devant-Orval is a sight to behold. Ruins on one side, the working abbey on the other. The abbey gets its name from a Countess Mathilda, who lost her ring in a pond (now a fountain), and exclaimed to God to provide a miracle to get her ring back. As the story goes, a trout surfaced with the ring in its mouth. Mathilda exclaimed that this was the valley of gold (Val DÊ¼Or), and over time this changed into Orval.

They generally donÊ¼t allow anyone through the brewery, so we were very lucky to have been granted this opportunity. The Orval brewery, like the other Trappist breweries, brew their beer within the walls of the Abbey â it’s part of the condition of being called a trappist beer. So what happens when they reach capacity? For Orval, nothing. Yet. They have been at capacity for some time now, but they will not expand their storage, something which provides them with a good problem…

Another famous Trappist beer, Chimay, have broken ranks to some degree, by bottling their beers outside the trappist walls. They are still technically brewing their beer within the abbey walls, however this is a moot point for the other abbeys.

Orval produce just one beer for commercial release (they produce a lower alcohol table beer for the monks). It is 6.2% ABV, dry hopped extensively with Saaz flowers and uses predominantly Belgian pale malt, a caramel malt. Bittering hops are a combination of pellets (Styrian Golding, Hallertau and French Strisselspalt) and isohop, with Styrian Golding and Hallertau flowers in large sacks for dry hopping. Sometimes they substitute Belgian malt for German when supplies are limited. The water for brewing is still obtained from the same well used for centuries. 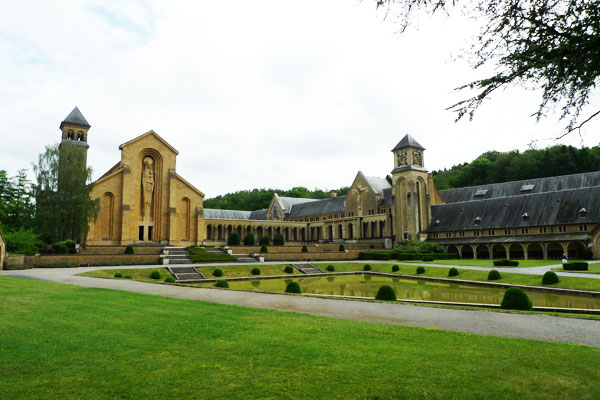 Orval is secondary fermented in large conditioning tanks, where a fresh collection of yeasts (including Brettanomyces) and the sacks of hop flowers are added. After two weeks here at 15C, the beer is then centrifuged, a fresh yeast and candi sugar is mixed in, before it is bottled, conditioned for four weeks, then shipped out.

Where Orval was once fermented in open tanks, it now uses 200HL cylindroconicals. The brewhouse has been modernised substantially over time. We started talking about BelgiumÊ¼s microbrewers, and how they export nearly 85% of their beer. Orval on the other hand, export only about 14%. The other 86% is for the home market. Why? The fact their beer is suberb, the recipe has seen only minimal change over the last 80 or so years, and perhaps most importantly, the brewery donates 55% of income to charitable deeds… How could the public be swayed from supporting such a worthy product?

My memories of fresh Orval are still the same… a wonderfully intense citrus aroma initially, which then subsides to a lovely hoppy, floral aroma. The malt is there to provide some support to the hops, but the finish is still lovely and dry…absolutely divine. We were lucky enough to stay in a hotel in Florenville (5 minutes away from Orval), which actually ages a large supply of Orval. A two and a half year old bottle still had a wonderful aroma, albeit less intense, with the dryness (tart?) becoming more pronounced. A superb aperitif beer.

After leaving Orval, we drove around the Ardennes, visiting towns such as Rochefort, La Roche en Ardennes, Houffalize, Hamoir and Bastogne. Unfortunately, no breweries were organised for these towns, however beers were consumed and purchased: Lupulus, Rochefort 10 & La Chouffe Tripel IPA were the standouts.

Next stop was Brussels, only for a quick visit before heading home. Having spent some time here before, and seen the inner workings of the Cantillon brewery, this trip was more about drinking the finished product from BelgiumÊ¼s small brewers. One of the best places in Brussels to do so is Moeder Lambic. They have an amazing 42 taps of small Belgian brewers beers. They also have one or two guest taps (from Denmark & the US). On top of this, there is an extensive bottle list, plus artisan cheeses and breads from all over Belgium. This allowed us to sample cask poured Cantillon Gueze, RosÃ© de Gambrinus and Kriek, on top of Dupont Stout and many, many more!

Sadly, it was time to leave Belgium, taking with us wonderful memories of amazing beers, fantastic people, and some great ideas. It may be another 13 years before we get back to Belgium, but I know the memories from this trip will last much longer.

What has stood out?
The incredible countryside of both Flanders and the Ardennes, the generosity of the brewers, the amazing beers, the struggle of the small brewers and the love and pride of a nation towards its favourite tipple.

Have you learnt anything you’ll be bringing back to Oz with you?
Now that the trip is over, there are a number of techniques and tips that weÊ¼ll be bringing back to Oz. First and foremost is quality ingredients. European malts are essential to reproduce the Belgian best. As are hop flowers for dry hopping. A specialised hop strainer for kettle and conditioning tanks will also be made up (special thanks to De Ranke). Herbs and spices used both delicately and conservatively can be accentuated with a very gentle toasting. Hop sacks full of flowers donÊ¼t need to be weighed down. Food grade 1000l cubes make excellent and cheap conditioning vessels for lambics (just make sure they stay out of the dark). Belgian pilsner malt makes an excellent base for nearly all Belgian styles, with extra malt flavour from specialties. Dark Belgian Candi Syrup for added flavour and aroma…

Yeast. ItÊ¼s pretty hardy stuff, tolerating up to 30C for some strains without any obvious bad effects. Ferment quite high to get the most flavour & character from Belgian yeast. Experiment as often as possible; push the boundaries of style.

Small brewers are the ones who are prepared to push boundaries and be the most creative. A âstamp of authenticityâ, as in the case of the Belgian Family Brewers, is nothing more than a marketing strategy to promote their own self interests, rather than increase or maintain a certain quality.