Located at the base of the Grampians National Park, Halls Gap is a town built on tourism, with a population in a constant state of flux as visitors head to the town year round – using it as a launching pad for climb, camping and explore the neighbouring mountain ranges.

So, if you're going to open a brewery in town, there's likely no better place to do it than in a former tourist information centre. It seems to have worked for Marty Schoo, Pat Calvird and Will Hudson, who welcomed plenty of unsuspecting tourists to town with beer rather than maps and local tips when they first opened the doors to Paper Scissors Rock.

"We got a lot of that initially but Google Maps has changed now, so people have cottoned on to it," Marty says. "We're happy to provide people information, though: buy a beer and we'll tell you whatever you need to know."

Before launching Paper Scissors Rock, Marty, Pat and Will were brought together by a shared love of beer, acting as the unofficial taste testers deciding what Will should stock in his café, Livefast.

"There was a group of us who got together and Will used to buy a whole bunch of single craft beers," Marty says, "and then we'd have beer tasting nights and the best six on the night is what he'd go and buy for the café."

Since opening their doors in May, Marty says the biggest challenge has been to keep beer flowing through their eight tap system, with only enough capacity to make 500 litres of beer at a time.

"We're struggling to keep up; a tank gets washed out and it's either full of beer by the end of the day or early the next day," he says.

"Our Plan B was to eventually brew off site and start packaging as well but we might need to move into that Plan B quicker than we thought."

So without further ado, here's the team to tell us more about the regional brewery as part of our Who Brews...? series.

The brewery owners are Pat Calvird, Marty Schoo and Will Hudson.

Pat and Marty are the brewers at Paper Scissors Rock Brew Co and both had a long history of small scale homebrewing behind them before venturing into starting up the microbrewery. Pat traded in his arborist job with the brewery starting up, Marty continues to juggle his photography business as well as brewery duties, and Will does the same with his local café, Livefast.

We brew on site at our little venue in Halls Gap, in the heart of the Grampians.

It's rewarding putting together a beer recipe over time, creating something you believe will work, and ultimately seeing customers enjoying it and coming back for more. Getting feedback such as: "This is the best example of this style I've had" is pretty awesome to hear.

Three and half years ago, Will and Marty were having a beer tasting night with others and the discussion shifted to tourist towns having breweries: Beechworth, Bright, Torquay to name a few, but Halls Gap had nothing within two hours in any direction.

We approached our mutual brewer mate Pat on his interest and, just like that, the business idea was born.

We had three names for the brewery, none of which we truly liked. Will suggested that, to decide the name, we should just Paper Scissors Rock for it.

Pat and I thought he suggested Paper Scissors Rock as a new name and we both liked it. After a moment of confusion we all decided that our accidental new name would stick.

Right now in the current lineup it would have to be the Red '67, an American style Red IPA. In the pilot stage we experimented a fair bit with new malts and hops. We wanted a beer that showcased the malt Red X as the base malt, as the colour it produces is amazing.

The recipe's malt bill was 67 percent Red X, 6.7 percent ABV and hit 67 IBU, hence the 67 in the name. We all like our classic cars too, and so the connotation of a Red '67 had a nice ring to it for a big American Red IPA. 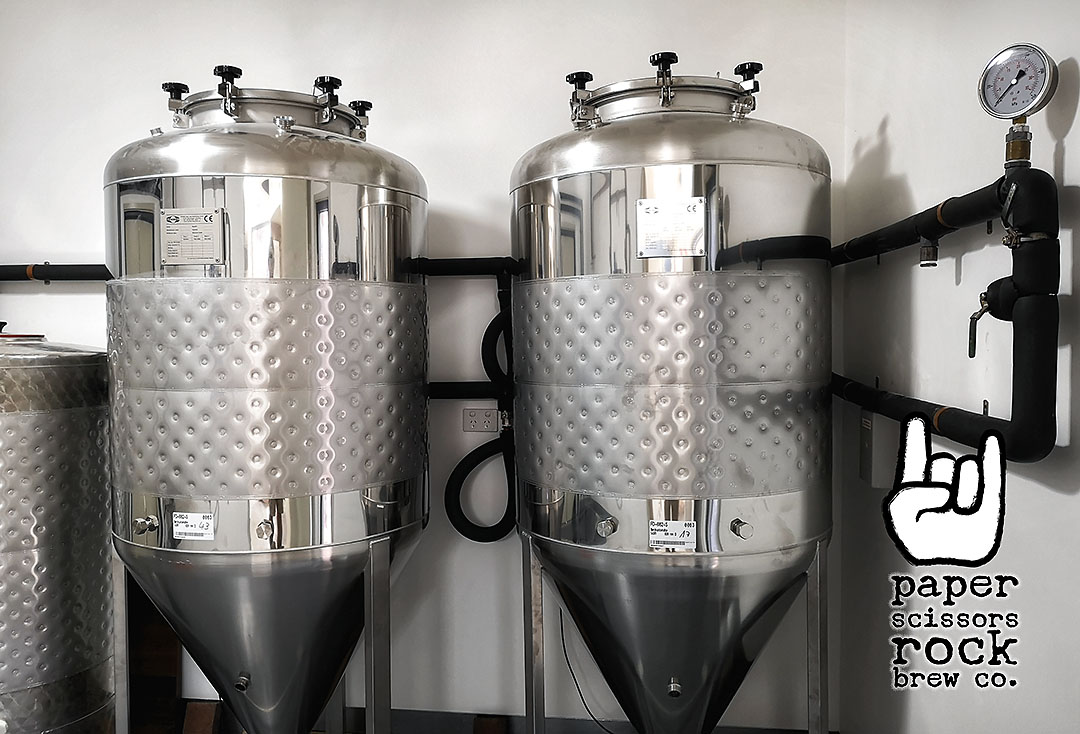 IF ANYONE WALKS IN ON BREW DAY, WHAT ARE THEY MOST LIKELY TO HEAR BLASTING FROM THE SPEAKERS?

Aussie blues and roots, a bit of 90s grunge, the odd hard rock classic, and occasionally some deep beats. We'll have a listen to just about everything!

Apart from beer, though, we also have an amazing kitchen, and we regularly showcase live music. So there's never a moment without music at Paper Scissors Rock Brew Co.

The fridge at home has a good range of Aussie made IPAs, double IPAs, the odd pale ale, and a few big imperial stouts.

The pilot taps have a Galaxy Pale Ale and an Oak Rum Porter on board.

There's not too many hyperlocal breweries out our way but, if we're talking Victoria, then in recent times we've been a big fan of the Market NEIPA from Hop Nation, and the Salted Caramel Milkshake IPA from 3 Ravens. Both complex and downright amazing.

Right now, only on tap at the brewery: right in the centre of town at 119 Grampians Road. Future expansions hope to see us packaging, and getting our mainstay products distributed more widely.

We like the idea of staying on the smaller end of the scale, still being able to produce numerous beers and change them up when we like.

We'll still have a our social brewpub venue in the town centre, but hopefully we'll also be brewing offsite allowing us to package and distribute our beers more widely.

Articles by Will
who brews? grampians victoria halls gap