The tourism pull of small breweries, whether they're in the inner suburbs or regional centres, is an oft-repeated mantra among those who tout the benefits of craft beer.

Tour companies with the sole purpose of guiding drinkers to good beer venues and bars can be found across Australia and, when Australian beer geeks travel overseas, must see breweries usually form a key part of the itinerary, while staff at leading beer venues can be a goldmine of useful information.

Dave Rooney has managed to combine both: he's an Australian you'll find guiding people through the streets of Buenos Aires in search of the good stuff, as he has been since 2017.

Dave first made it to the Argentinean capital in 2011, when the list of bars selling craft beer could be counted across his two hands. Today, the local beer scene is varied enough that this year saw the launch of Festival de Cervezas Extrema - the Festival of Extreme Beers. It's a festival that welcomed brewers from across the world to showcase their sour and barrel-aged side - including Melbourne's own Bonehead Brewing.

But, even as Argentina's beer scene becomes increasingly diverse and new breweries offer Dave more stops on his tour, within a year he'll be back in Sydney. And, before too long, he might be welcoming tour groups through his own doors.

"I'm actually heading back to Australia next year, and starting up a craft brewery with a very good friend of mine, Anton van den Berg," he says.

Before he returns home, we caught up with Dave to pick his brain about the Buenos Aires beer scene as part of our ongoing Aussie Export series.

How did you end up living in Buenos Aires?

In a nutshell: I had a midlife crisis.

I had been in a serious relationship that ended quite abruptly and a year later I still wasn’t over it, and didn’t love my current career path. I knew I could work as a freelance web designer/developer overseas so I decided I should get away from Australia for a while.

At the time I’d travelled widely but had never been to South America, so decided to head there, starting in Buenos Aires as it’s fairly easy for a non-Spanish speaker. I spent ten months here initially before travelling the rest of Latin America, came back late 2015, and have been here since.

Were you involved in beer in any way back in Australia? Or just a keen fan?

Not at all. When I left Australia eight years ago, I drank cheap, crappy lager like the majority of Aussies…

I spent two months living in San Diego mid-2013, walked into a bar and found 50 craft beers on tap. After wiping the gobsmacked look off my face, I began trying every new beer I came across and haven't stopped since!

A recent trip [in August 2018] to Maine saw me delve even further into the more "exotic" styles and am now a huge fan of sours, goses and the "funkier" styles out there...

So, how did you come to be involved in running craft beer tours?

From there, I hosted frequent social meetup craft beer bar "strolls" (I’m too old to "crawl") with Facebok group members.

Then, in late 2017, Airbnb sent out an email promoting the fact they were adding "Experiences" for Buenos Aires, and calling for submissions for tour ideas. I decided to submit my idea for a tour, which become the Off-the-beaten-track Craft Beer Stroll.

My first tour was in December 2017, though since I’d never run a tour before I was extremely nervous to begin. But it turned out I was a natural at helping people enjoy drinking craft beer and having a good time – surprise, surprise!

It helped that I’d got to know a few of the local brewers so I did have a few contacts and insights to the local scene, which my guests have enjoyed learning about.

Who are the tours aimed at? Locals? Tourists?

Primarily, it’s there for English speaking tourists - I get by on my Spanish, but it's not good enough to conduct a tour in.

What can you tell us about the local beer scene? Are their many breweries, craft beer-dedicated bars?

When I first arrived in 2011, there were maybe ten craft beer bars within Buenos Aires and a couple of dozen craft breweries nationally at most. Eight years later, there are well over 230 craft beer bars in the city, and more than 100 breweries nationwide; some sources claim up to 1,000, but I’m not sure how reliable these sources are, nor if they’re including “hobbyists” as well as professional breweries.

I have created a Google Map of the craft beer bars in Buenos Aires. These are only the craft beer specific bars, and don't include the many other bars that serve craft beers along with other drink types, which is probably most bars nowadays.

And, interestingly enough, this craft beer “boom” of the past eight years has occurred even while the local economy has been going down the gurgler…

What about typical styles available?

Every bar has a golden, a red, an IPA, and a dark beer - a little like how most bars in Australia will have a pale ale or two, and maybe an IPA or stout.

Some of the dedicated craft beer bars are now getting more adventurous and you'll often find varieties like NEIPAs, sours, goses and the like. Not quite as frequently as in the US, but comparing with my recent visit to Sydney, the bars here are more adventurous than most in Sydney.

More and more brewers here are delving into more adventurous styles, though one thing I haven't seen enough of yet is utilising more local flavours in the beers.

Do you make it back to Australia much? Are you noticing many changes in the beer scene when you come home?

I was back just a couple of months ago, and was a little disappointed with the lack of varieties on tap in most Sydney bars, outside the brewery taprooms themselves. We seem to be stuck in a world of pale ales and the odd IPA, at least in the bars.

I saw some bars with four or five different pale ales on tap and not much else. How many pale ales do you need on tap at the expense of more variety? This may be just a Sydney and Brisbane thing, which is where I spent most of my time this visit. I have heard Melbourne is a little more adventurous.

Though a big shout out to the Royal Albert Hotel in Surry Hills, fighting the good fight with a truly great selection of beers on tap!

Thankfully, the bottleshops gave me some hope, with a wide range of craft beers available in many, including some amazing sours and goses (Western Australia's Beerfarm was one of my favs).

What shouldn't beer fans miss when they make it to your part of the world?

Strange Brewing is run by a brewmaster from Norway, but easily one of the best breweries here, if not the best, and definitely the brewer pushing the boundaries the most with their beer styles

Other notables include Juguetes Perdidos, Gorilla Cervecería, Grunge, and Dos Dingos. Dos Dingos is actually run by two lads that spent a decade living in Melbourne before returning home and starting a brewery here (picture above brewing with Melbourne's Bonehead Brewing).

Tell us more about the Festival of Extreme Beer. Is there a lot of interest in sour beer locally?

The “Festival de Cervezas Extremas” (Festival of Extreme Beers) was a first time event hosted by Juguetes Perdidos (mentioned above), and included brewers from around the world bringing their sours, aged ales, and strong beers to Argentina. It was an amazing success, and looks likely to be happening again next year.

While there are probably a dozen breweries at most producing sours of any note, this and related styles such as goses are starting to gain traction, so I would expect to see a huge growth in this and other more “adventurous” styles over the next year or so.

You can check out other Aussie Export features here. Know an Australian working in the beer industry elsewhere? Let us know. 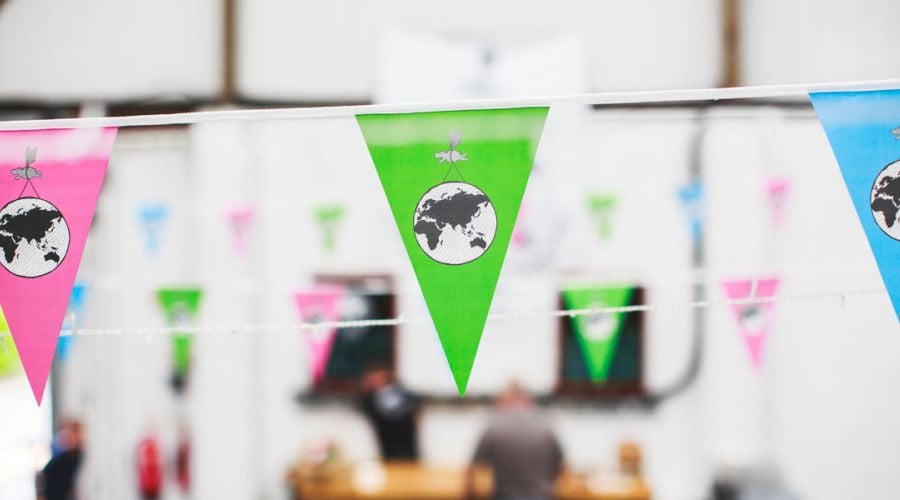 The very first entry in our Aussie Exports series featured the couple behind Lost and Grounded in the UK. They've since gone on to great things so, on a recent trip to his homeland, Neil Richardson called in to find out more. read on