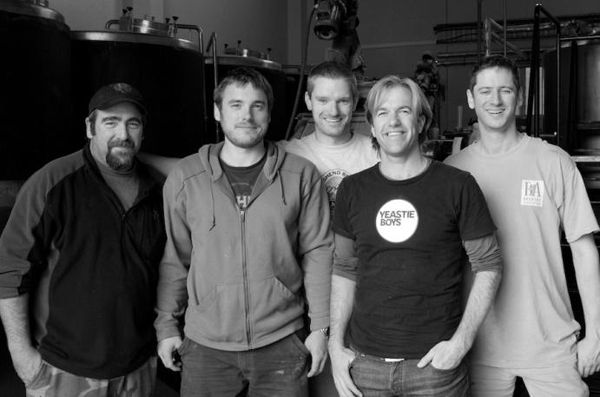 A few weeks back, you may recall a story about Mountain Goat recreating a beer from Christchurch’s Three Boys Brewing to be sold as a fundraiser for those affected by the earthquakes in New Zealand’s South Island. It was one of many gestures from within the beer community, such as Stone & Wood’s Red Relief and The Local Taphouses' SpecTAPular whip rounds, which also raised money to help those affected by the Queensland floods.

Among those gestures was a collaborative brew by top Kiwi craft breweries 8 Wired, Renaissance and the Yeastie Boys called Rescue Red Ale that was first discussed after the initial quake last year, then again after the Queensland floods before becoming reality after the aftershock hit Christchurch on February 22. Now a few kegs have made it across the Tasman, allowing Aussie drinkers to sample the fruits of the brewers' combined thinking in the knowledge much of their cash will end up in the coffers of the Queensland Premier’s Flood Relief Appeal. All three breweries sell their beer in Australia via Innspire, with Ampi Plastics donating a pallet of one-way Eco Kegs to the effort.

Yeastie Boy Stu McKinlay says: âSÃ¸ren and I discussed the recipe briefly via email – ending up with the concept of a hoppy yet sessionable red ale, with a French Saison yeast that both SÃ¸ren and myself had been playing with in trials. Over a beer or two, and possibly a whisky, we huddled around SÃ¸ren’s tiny laptop to finalise our ideas in Promash. Two pale malts (mostly Gladfield, with a little Malteurop) and a cacophony of specialties in the form of CaraBelge, CaraMunich II, CaraAroma and Carafa Special III would make up the grist. [It was] hopped mildly (for hop monster SÃ¸ren!) with Styrian and Pacifica in the boil and a big load of Styrian flowers in the hopback."

The beer is described as “a hoppy, funky amber ale”. Malt was donated by Gladfield Malt and Cryer Malt, New Zealandâs two main craft beer malt suppliers, with hops courtesy of NZ Hops. Documentary photographer Jed Soane, of The Beer Project, captured the brew on film, while the tap badge was designed by Deflux, a beer-loving design company whose inner city office was hit particularly hard by the February earthquake.

So far, kegs have been purchased by:

It is hoped that just shy of $3,000 can be raised for the Flood Relief Fund.