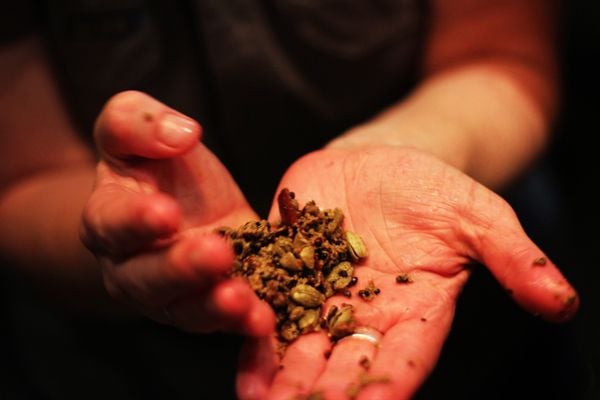 It’s been a big year for craft beer in Australia – and bigger still for women involved in the craft beer industry. Having set out their stall with the Victorian Women of Beer stage show during this year’s Melbourne Food & Wine Festival, then launched Sydney and Melbourne branches of the global Barley’s Angels organisation, the next step was to brew their own beer.

The six women involved are Beer Diva Kirrily Waldhorn, Karen Golding of Red Hill Brewery, Beth Walkenhorst of Hargreaves Hill, Sam FÃ¼ss of True South, Aine O'Hora of Matilda Bay and Jayne Lewis of Two Birds Brewing. They decided on a Belgian style tripel – powerful, yet elegant – a few weeks ago then gathered at True South last Saturday to put their combined recipe into action, aided and abetted by a number of beer-lovin' ladies.

While the spice mix of cardamon, pepperberry, cassia bark and grains of paradise was doing its work alongside two hop varieties new to Australia – Amaris and Strisselspalt – the crew and guests tucked into a hearty Argentinian BBQ upstairs on the landing overlooking Port Phillip Bay. The next step will be launching the beer sometime in October with a bash at Josie Bones. All profits from the brew, which should be considerable given True South donated the brewing facilities and consumables were donated by Grain & Grape, Bintani and Cryer Malt, will go to the McGrath Foundation.

The Crafty Pint popped in on the day to take a few snaps, with additional photos supplied by Jenn Davidson, author of cooking with beer blog Soaked In Beer.