As regular readers of this site will be well aware, Bendigo is a regional city that punches well above its weight for craft beer. It can be traced back to 2009, when The Dispensary Enoteca first gave beer serious respect; today, the likes of The Cambrian, Handle Bar and the top notch bottleshop that is The Hop Supply Co are among the venues giving locals and visitors alike plenty of choice.

The city has its own not-for-profit good beer enterprise in Bendigo Beer, which was started by Trev Birks and Justin McPhail with the aim of convincing local publicans to rethink their beer offering. It’s now a bona fide powerhouse in the local hospo scene that has run masterclasses and educational workshops for local bar operators, run events and – the jewel in its crown – has turned the unique walking festival Bendigo On The Hop into what has to be one of the fastest selling beer events anywhere in the world.

Justin and Trev developed the idea when both worked at Bendigo Bank, before the former’s shared passions for beer and food led to a change in career.

“I fell into cooking through homebrewing, through working on developing flavour profiles,” Justin (pictured above right) says. “Then I just really feel into the foodie world. I found the world of food and beer a lot more enticing than spreadsheets – which I think is a fair thing to say.”

It’s a path that saw him head up the kitchen at Bendigo’s iconic Goldmines Hotel (these days, rather less craft beer focused than it was) before launching Flight Bar & Bottleshop with Nick Horgan (pictured top left) in 2016. Having travelled through America consuming voluminous amounts of great beer, fried food and insanely hot chilli sauces before opening the venue, the mission was a simple one: bring quality fried chicken to the people of Bendigo and serve it alongside the best beer they could it get in, all while creating a collection of frequently hop-infused hot sauces.

“We thought it would be really cool to do Southern fried chicken the right way rather than what everyone in Bendigo – and probably Australia – perceives as KFC,” Justin says. “Doing it from scratch, hand breaded and made to order.”

It proved a runaway success, turning an unlikely dead end spot in an old shopping arcade into a place where people would queue for the chance to give their taste buds a serious workout. [It’s perhaps worth pointing out that the heat options go so high that I wondered if the author of this piece was going to survive one chicken dinner – and he’d only chosen the second hottest option too – Editor.]

Thus, in June 2019, having decided fried chicken and craft beer shouldn’t be the only vice they’d serve up for the people of Bendigo, Justin and Nick started Hustler. Like Flight but for burgers, Hustler takes inspiration from some America’s finest burger joints, although the feel of the space was in part driven by the beer world.

“We drew inspiration from the fit-outs of Mikkeller bars around the world,” Justin says, “and hopefully [we’ll have] a similar amount of brilliant beer on tap.”

At time of writing, they were still waiting on approval of their liquor license but plan to install somewhere between six and ten taps pouring all styles of beers to go with those burgers.

The house made hot sauces have a home at Hustler too, with the duo seeing a natural affinity between craft beer fans and those with a love of hot sauce.

“I think it’s just an appreciation of different flavours; you don’t get too many Carlton Draught drinkers looking for hot sauce,” Justin says.

“Whereas people who come into our shop are looking for a hundred different beers in the fridge, looking for different flavour profiles: sweet and sour and savoury and all that stuff. They do the same with their food.”

Much like with beer, Justin says there’s often an essential starting point for any good hot sauce.

“The best way to start making a hot sauce is think about what you’re going to name it. Nine times out of ten, we create a pun and make the sauce around the name.”

That list includes Pineapple Express, made with red gum-smoked pineapple and jalapeño sauce, and Beats By Flight, a beetroot, leek and white pepper hot sauce. The most tongue-singeing of those is Fear the Reaper, made entirely with Carolina Reapers.

Besides coming up with a suitably punny name, Justin says making a hot sauce shares many elements with brewing.

“We’ve approached making chilli sauce the same way as we would be brewing a beer,” he says. “What flavour profile do we want? Colour? Bitterness? Sweetness?

“What kind of body will it have? Some sauces are more effective having a thin viscosity which helps the heat really race in and give you some sting, others work better being thick to coat the tongue and more appreciate the finer additions.”

It's a variety of flavours that provides plenty of pairing options with beer.

“When you’re working on a beer pairing, you need to think about whether the beer will amplify or dull the palate,” Justin says. “Usually, we break it down to the kind of spice we’re dealing with.

“Is it fragrant/peppery? Go for a saison. Nashville hot chicken needs something to dull the palate, given the intensity and rich flavours, so an IPL would be a good start: bitterness to deal with the heat, cleansing, not overly complex. Just something that puts you one step away from reaching for a glass of milk!

“If it [has lingering heat or is] cayenne based, go for something like an IPL, because you’re going to be taking more than one sip, and you don’t want to waste a DIPA because your mouth is on fire. If it’s overtly fruity and spicy – habanero, Scorpion, Reaper, etc – choose a mid-strength IPA because lots will be needed to get through the experience.”

We asked the guys for their recommended pairings, and here's what they came up with...

Being a Helles style lager means it's lower in bitterness and has a nice, rounded malt character, while still being crisp and refreshing. The soft noble hop character helps to draw out the (secret) herbs and spices used in our Cajun seasoning and, when combined with the dry lager base, they provide enough bitterness to make a perfect palate cleanser.

Steering away from the easy-picking fruits – Kölsch, Vienna lager, pils – and going for a personal favourite. Silent Knight is roasty with smooth dark chocolate notes that link up perfectly with the caramelisation and smokiness of beef on the grill. But it isn’t cloying or sweet, so that dryness and elevated bitterness helps to cut through the fats and richness of the burger.

Make Your Own Hot Sauce!

No Crafty Pint visit to Bendigo is complete without restocking on some Flight hot sauces. If you fancy trying your hand at making some at home, here's the base from which Justin and Nick build all of theirs.

Says Justin: "It can be adapted to suit any additions that you may like. Different chillies can be used, and how you prepare the chilli before the boil can make a good hot sauce great!"

He says this can mean:

You can find other Beer Food articles on the site here. 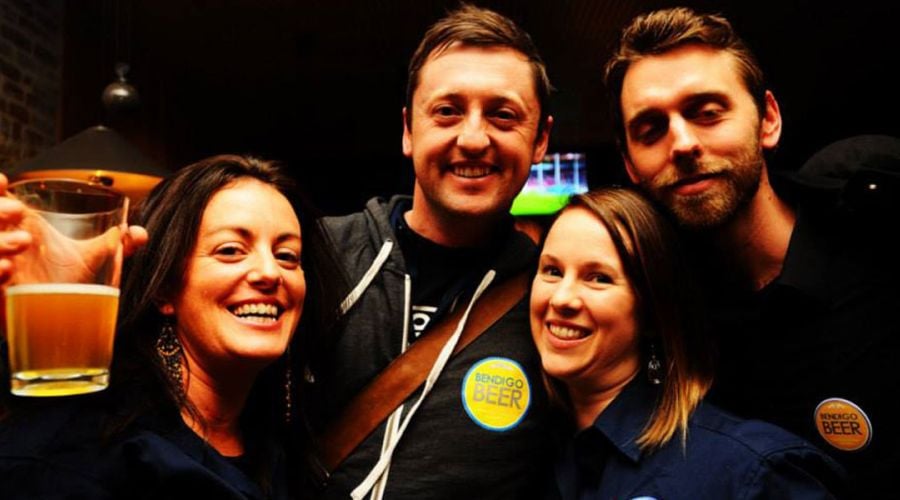 We've got another party, another competition and our first "get in quick" exclusive event for you in the latest update from The Crafty Cabal, the beer lover bonus scheme for supporters of The Crafty Pint. read on