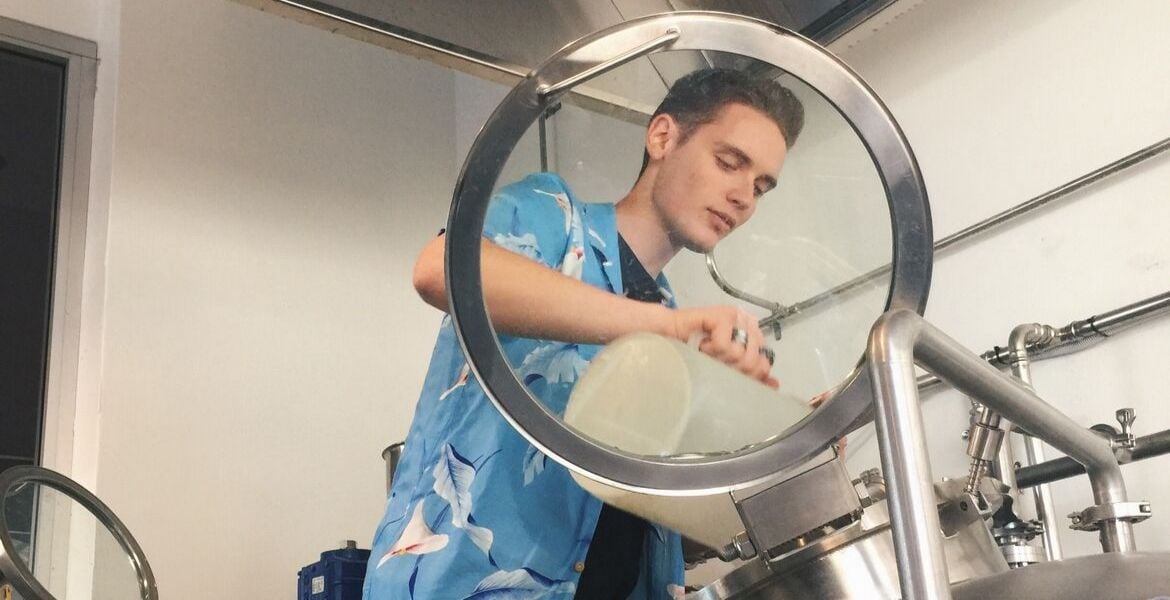 What if listening to music could change the way beer tasted?

That’s the idea that Connor McLeod, who creates indie electronic music under the name Hylander, put forward when he proposed a collaboration with Sydney Brewery.

The question lodged itself in his mind while he was studying Beverage Technology, a subfield of bioengineering, at the Management Centre Innsbruck in Austria. He came across the idea of “sonic seasoning”, an experimental concept that uses sound to affect flavour. It's linked to synesthesia, a phenomenon whereby one sense, such as hearing, can involuntarily stimulate other senses.

While extreme cases of synesthesia are medically recognised as a condition, there’s research that shows aspects of synesthesia to be present in all human brains; for example, the tendency for sweet flavours to be heightened when paired with higher pitch notes, and for bitterness to be heightened when paired with lower pitch notes.

Wanting to explore this idea, Connor approached the Sydney Brewery team with the proposal of a sonic pairing: one of their beers with one of his songs.﻿

“This concept is very new,” says Connor, “but I think it’s something that will resonate with a lot of audiences. Sound and taste have been experimented with in other formats such as Heston's sounds of the ocean experience, but the concept of sonic seasoning is new and will be fun to explore.”

The Sydney Brewery team welcomes experimental collaborations – past creations have included an oregano lager with Maybe Frank pizzeria, and a vermouth cider with Italy's OSCAR.697. So, when they heard Connor's idea, they were on board right away.

The parties decided to select flavours they could then pair with a custom-created soundscape by Hylander.﻿ They landed on a session IPA with a blend of Galaxy, Citra and Mosaic hops and a yeast strain the brewery was already experimenting with. Connor joined the brewers on the day, not only to take part in the brewing, but also to gain inspiration for the music from the ingredients themselves.

“During the process I used a special microphone to record some foley samples to use in the soundscape,” he says. “It felt like a very literal and authentic pace to start when creating a soundscape for the beer.”

He used the samples – rattling hops in a bucket, pouring grain, recording the whirling of the tanks – to start his work on the soundscape, then created other sounds using a mix of analogue and digital synthesisers.

When the beer was ready a few weeks later, he used the flavours of the beer to help him finish his work.

“What we can do with hops in terms of creating aroma and flavour profiles is fascinating to me,” Connor says. “I used the flavour profile to craft my sounds around the complexity of the bitterness and sweet notes to complement what I was tasting.”

As well as sensory inspiration, he also took thematic inspiration from the Galaxy-forward hop blend, giving the soundscape “a very spacey and ethereal sonic palate”.

Hylander performed the six-minute soundscape live at the launch of the Hylander Session IPA at Sydney Brewery's Surry Hills brewery bar, inviting those present to listen to the spacey music and see how it affected their drinking experience.

The beer itself is a hazy orange with a creamy head, like shaken peach nectar. Aromas of peach and nectarine are abundant, but the flavours in the mouth transition quickly from stonefruit to grapefruit zest, and there’s a kick of bitterness in the backend that’s impressive for a session IPA. (Having said that, this writer tasted the beer while listening to the soundscape, so can’t promise anyone else the same experience in the absence of the sonic seasoning.)

Hylander Session IPA is available at Sydney Brewery in Surry Hills. At this stage, the soundscape for the beer is being kept exclusively for the brewery's events, but you can hear Hylander’s debut single Indigo Child here to get a sense of his sound, and follow Hylander on Facebook and Instagram to catch upcoming releases. Incidentally, Indigo Child has been described as “a hazy odyssey of emotional lust”, which this writer would also consider an apt description of the Hylander Session IPA.

For those interested in trying a sonic pairing, Sydney Brewery will be hosting a Sensory Beer Dinner in November: a four-course degustation with matching beers and ciders, accompanied by four soundscapes developed by Hylander to bring out different flavours in both the food and drink.

You can read about the time Brisbane brewery White Lies invited the Brewditos to help them ferment and age an imperial stout with 24/7 metal here.