Despite being New Zealand’s largest city, Auckland has always trailed Wellington and Christchurch when it comes to the title of the country’s best place to be a beer drinker. But the past few years, and an initiative launched in the past few months, has the place known as the City of Sails quickly turning into a City of Ales.

There is an acknowledged rivalry between Auckland and Wellington. One: the biggest. The other: the capital.

The former will argue there is nothing worth thinking about in New Zealand south of the Bombay Hills, while the latter will happily throw the slur Jafa (just another fucken Aucklander) right back. Star All Black Beauden Barrett moving from the Wellington Hurricanes to the Auckland Blues next Super Rugby season will do little for inter-city relations.

But, when it comes to drinking beer, there has been no contest: Wellington’s festivals are cooler, its pubs easier to get to and its bottleshops better. There is a reason why the Brewers Guild of New Zealand awards were held there every year until recently, and Auckland brewing companies Hallertau and Epic decided to hold the West Coast IPA Challenge at The Malthouse in Wellington – Wellington is just better.

It is something Michael Donaldson readily concedes. The Palmerston North-born beer writer has lived in the city since 2005, back when there were only two places in the central city to drink craft beer: The Shakespeare Hotel and Galbraith’s (pictured above). Both brewpubs were focused on selling solely their own beers at the time. He isn’t quite sure what he drank at Galbraith’s the first time he went, but it was probably along the lines of their Bob Hudson’s Bitter. Made with whole hop flowers, it exudes the sweet-but-floral character typical of cask-conditioned English ales. The Shakespeare’s beers were not too different.

To get good beer, you had to get in a car and head to the outskirts. That is where you would find the likes of Hallertau. Founded by Stephen Plowman, Hallertau is a 20-minute drive on a good day from the CBD; double that if you get stuck in Auckland’s notorious traffic.

Donaldson says it was “a pub in the country” when it opened, surrounded by country fields. But Hallertau has since turned into one of the bougiest brewpubs you can find. Boasting arguably the most impressive beer garden in the country, Hallertau was making wild fermented beers like Funkonnnay and sour red wine barrel-aged Porter Noir long before they were in vogue. But head there now, and you’ll find houses popping up along the once-rural roads around the pub.

It is the weakness of being an Auckland resident. The public transport system, while undergoing work, is miles away from being of a standard one would expect from a truly international city. Combine that with the hilly topography – the city is built on 50 dormant volcanoes – plus the ever-increasing urban sprawl and you are left needing a car to experience the best beer spots, unless you feel like long hikes on humid days on paths next to motorways.

But that all changed this year with the establishment of the Auckland Beer Mile, a collective of seven bars and taprooms in a 3.2 kilometre row. Many of the venues were opened in the past year or two, including Garage Project’s Kingsland taproom (pictured below). The mile makes the most of Auckland’s public transport network, with Morningside Train Station at one end at Mt Eden Station at the other. If 3.2km sounds like too much walking, you can almost always find e-scooters for hire at the stations.

The diversity of the mile is summed up by the corner of Symonds Street and Mount Eden Road. The car park on the corner has Galbraith’s on one side, serving real ale and selected guest beers in the grand old former Grafton Library building. The building on the other side of the car park houses two bars – Save Ferris (a craft beer bar with dozens of arcade games and pinball machines) and Beer Jerk Bunker (a basement bar dedicated to rare imported beer). And, while not officially on the mile, the team behind Beer Jerk Bunker have also opened off licence The Fridge and Flagon a stone’s throw away from Galbraith’s.

Head there on the right night of the week and you might find yourself roped into an impromptu tasting of their latest imports from the likes of Deschutes, Bruery Terreux and Alesmith, as well as rare New Zealand beers.

Urbanaut Brewing is also on the Auckland Beer Mile. Founded in 2017 by Simon Watson, Thomas Rowe and Bruce Turner – the trio met at Rangitīkei College in Marton, a town home to the country’s largest malt producer Malteurop – Urbanaut has quickly established itself as a key player in both the Auckland and New Zealand beer scenes. Urbanaut not only brews its own range, but contract brews Yeastie Boys and helped Galbraith’s package some of its can-conditioned real ales.

Bruce’s wife is based in Wellington, but he says Auckland was always the place Urbanaut would be founded. While Wellington and Christchurch were considered, there had already been a lot of growth in those areas.

“In five years everyone in Wellington has craft beer in their bars,” he says. “Auckland has just started to follow that same kind of idea.”

He puts Wellington’s early adoption down to its creative and supportive population, but also its physical shape. The small walkable city funneled towards the harbour means all the bars are walking distance, making it easy to shuffle from bar to bar.

“The Beer Mile gives a Wellington feel to Auckland,” he adds.

But before the mile there had to be the venue. Michael says Auckland’s scene has experienced the opposite of a ripple effect; instead of good beer rippling out from the centre of Auckland, the outer suburbs and towns have led the charge.

Sawmill Brewing is an hour’s drive north in Matakana, while 8 Wired is ten minutes closer in Warkworth and McLeod’s is another hour north. You have to drive another 20 minutes west from Hallertau to get to Helensville, where Liberty Brewing have their brewery and taproom.

Deep Creek’s venue in Browns Bay (pictured below) is 25 minutes north. Even Lion-owned Little Creatures set up its New Zealand brewery in Hobsonville, a 30-minute drive from Auckland’s CBD. Boasting multiple restaurants and making beers exclusive to the New Zealand market, the $20m investment by Lion, which opened in February, packs out on the weekend despite the travel time from the city.

“Even now you go down to the Viaduct and central bars, and people will be drinking largely out of bottles,” Michael  says. “It’s to be seen to be drinking a particular brand. It took so long to change because it’s like turning the tanker.”

That tanker was multinational companies offering loans to set up bars in exchange for exclusive pouring rights. The Auckland Beer Mile, on the other hand, is seen as that tanker well and truly travelling in the other direction.

Bruce says the beer knowledge of customers going to their taproom has dramatically increased since Urbanaut opened. Michael says that's largely down to one thing: GABS. The festival, which has been steadily adding more cities to its lineup since launching in Melbourne, crossed the Tasman Sea for the first time in 2016, and is now an established part of the country’s beer festival circuit. Auckland had beer festivals in the past, but none had been able to stick like GABS.

“The city owes [GABS] a little bit,” Michael reckons. “It needed something like that and no one could make it work. Festivals are really good for turning a lot of curious people into converts.”

One person hoping to make the most of those converts is Andrew Childs. The founder of Behemoth Brewing Company (known in Australia as Chur due to a trademark issue with KAIJU!) has based the future of his business on Churly’s, a 140-seat bar and restaurant with an attached brewery and butchery. It will arguably be the crown jewel in the Auckland Beer Mile crown when it is ready. For now, it’s a warehouse kept warm in winter by gas heaters.

Andrew knows the difference between Auckland and Wellington beer scenes well, making some of his first beers in Wellington before moving north to take a job with a homebrew company and start Behemoth as a contract brand.

“I didn’t really know what was happening in Auckland when I got here seven years ago,” he recalls. It took him an hour to get from home to his favourite pub at the time, Vulture’s Lane – a place transformed in 2013 from a filthy downtown Irish pub to a filthy downtown craft beer bar.

Meanwhile, though Wellington may have had the better beer culture, Auckland had people. The city had 1.65 million residents as of 2017, in a country of 4.79 million people. Add in the fact that Auckland is the main point of entry for tourists, and the potential was there.

“That’s part of why I’m based here,” he says. “I also started liking it here.”

Churly’s will be based in Mt Eden, a community known for its ethnic diversity. Dominion Road, made famous by The Mutton Birds’ song of the same name, runs through the middle of the suburb. Sure, the road is also a four-lane main arterial route carrying 50,000 bus passengers each week, but it still has charm.

“Auckland has pockets of community,” Andrew says. “They support businesses near their own places.”

It's something that's behind the ethos of Churly’s. “We want it to be like Cheers – a local.”

It is that desire to create something for Aucklanders by Aucklanders that is motivating bar owners and brewers across the city do step up their game.

Hallertau have launched 09, a beer named after the city’s postcode, influenced by the city, and which can only be purchased in the city. Liberty is creating a tourist destination in Helensville, a place that feels more like a town designed to service farmers than a part of Auckland. Galbraith’s continues to be a caretaker of an iconic historic building.

“We don’t want to copy Wellington,” Andrew says. “We want to do our own thing.” 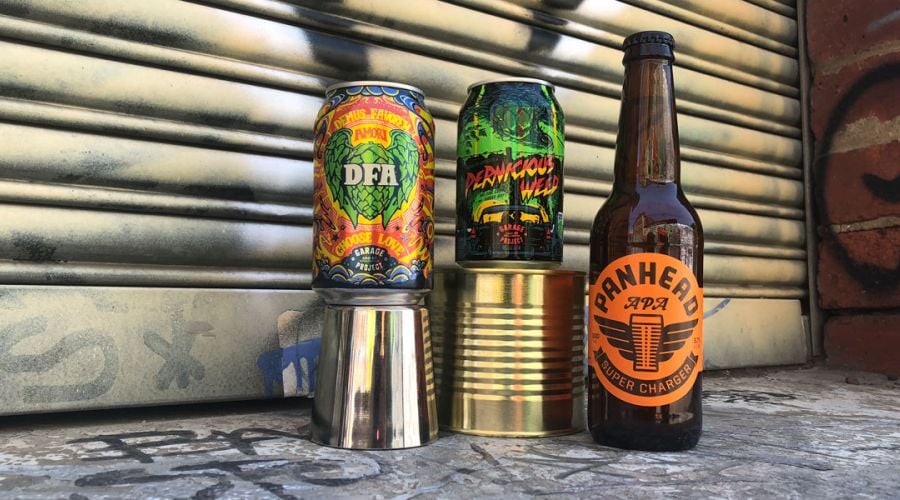