It seems that pretty much everywhere he’s laid his hat, Gerard Meares has struck gold. He was the head brewer at Paddy’s, in Sydney’s West, when it was named Champion Small Brewery at the Australian International Beer Awards in 2004, and has picked up trophies for the Dirty Angel he concocted when helping get Warrnambool’s Flying Horse up and running as well as a dark lager from his days at Sydney’s Schwartz Brewery. And now he’s heading out on his own, with a new brewing company called Pinchgut.

For now sharing the tanks at Australia’s most left-leaning brewery, St Peters, he’s released two beers into a few Sydney venues as he looks to establish a home for Pinchgut. The Pilzner and BLK PLZ (a black lager) are his tributes to the original Pilsner Urquell, where he recently spent time, and the LeÅ¾Ã¡k brewed at U FlekÅ¯, the world’s oldest brewpub in Prague.

“The black beer that we’re doing is that good that if I was still as arrogant as I used to be I would just brew that,” says Gerard. “It has the same grain bill as the beer from the U FlekÅ¯ pub, which I’ve seen described as a Franconian, dark kellerbier. I just pissed myself laughing as that covers a bunch of styles that people haven’t heard of!

“The easiest way to describe it is a black pilsner. If you close your eyes you wouldn’t necessarily know it’s black. I think it will shock a few people as you wouldn’t fail the Pepsi Challenge [trying to tell it from a straight pilsner].”

The Pinchgut name heralds from the small island in Sydney Harbour that is now home to Fort Denison. It used to stand much higher above the water line than it does now, but was cut down close to water level and the sandstone used to build Circular Quay.

“It’s a Sydney name as we want to be a Sydney brewery,” he says. “I find with Sydney people that it depends on where you went to school and who your history teacher was as to whether you know the name. I had the name about five years ago, then when we sat down to decide on the name for the brewery, about one and a half schooners in I suggested Pinchgut and everyone thought that was the one.” 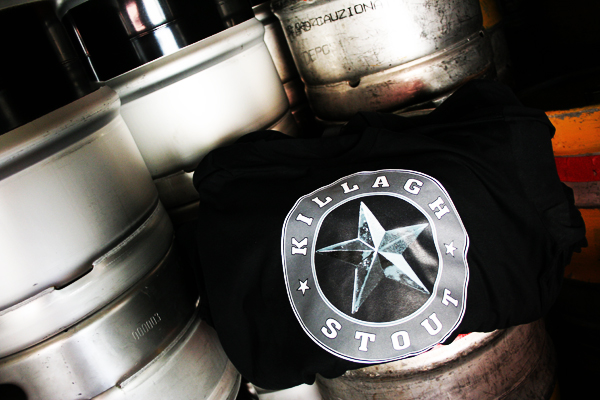 He says he’s looked at a couple of small breweries on the market around Sydney, but is at St Peters until something suitable turns up, or until “I become a pain in the arse to Matt [Donelan, St Peters founder].” It’s possibly the most self-sufficient – and Marxist [Edit: Not Marxist, but titanist (see below)] – brewery in the land, hand built by its owner right down to the unique bottling line he pieced together for $300. St Peters produces four regular beers: Blonde (a wheat beer); Killagh Oatmeal Stout; Green Star Pilsner; and Cinnamon Girl â a blend of the last two with added cinnamon. Matt only sells his beer from venues in neighbouring suburbs, carrying out all deliveries and collections himself.

As for Pinchgut, there are just the two beers for now, which have so far appeared at the Riverview Hotel in Balmain and Harts Pub in The Rocks but which should be appearing more widely in the coming months. You can keep up to date with stockists via the Pinchgut website. Beyond that, he’s been invited to brew a beer for next year’s Great Australasian SpecTAPular.

“We’re going to do something suitably oddball for that,” he says. We wouldn’t expect anything less.