These days, there's so much going on in the beer world it's practically impossible to keep up. As a beer news site, sometimes you have to accept things will be missed or dedicate no more than one or two lines in the weekly newsletter to something that might have made a full article a few years ago when we weren't living through this sensory overload flavoured by water, malt, hops and yeast (and whatever else brewers decide to throw in the mix).

It wasn't always thus. Roll the clock back past this decade through the preceding one and into the latter years of the past century and the beer world was a very different place. There were far less breweries, far less beer styles, no social media there to build hype and far less people interested in beer as anything more than a golden liquid you'd knock back for refreshment and social pleasure.

Yet there was still beer. There was still an industry. Beer still played an important role in society, as it has done for millennia. And there were still stories to be told.

For the most part in Australia, that storytelling was in the hands of one person: Willie Simpson, a well-travelled expat Kiwi living in Sydney with an interest in beer and brewing. He had a regular column in the Sydney Morning Herald and wrote books on beer that were like bibles for the precursors to today's beer geeks; one was even called The Beer Bible.

Over the past decade, his writing on beer has been scarce to the point of almost non-existent. But that's for a good reason: in 2008, he and partner Catherine Stark launched Seven Sheds, a brewery, hop garden and sometime meadery, in Railton in Tasmania's North West.

Just as he was writing about beer at a time when it was a rather unfancied and obscure thing to be doing – on these shores, at least – his approach to brewing has tended to focus on the unfancied and obscure too. Seven Sheds' beers are typically of the traditional and old school, inspired by real ales or older European styles, sometimes stabs at recreating history – why not send an English IPA in barrels back and forth across the Bass Strait to recreate the original IPAs? – and frequently showcasing the wares of other local producers in the region.

He doesn't brew a huge amount. You'll pretty much only find his beers on tap in Tasmania and the best way to pick up a selection in bottles is to visit their Railton home (meaning you can check out the town's topiary too). Many of them feature hops grown on their land, including varieties like Leggett not found anywhere else; one cult favourite is brewed with 100 percent smoked malts too. In short, the approach is as unconventional as pretty much any of today's experimental new brewers, but with an added layer of being wantonly uncool.

Willie has a reputation for being a bit gruff, but to me it feels like that's a border check: make the effort to get past and you'll be rewarded. Certainly, the 48 hours I spent in his company a few years back, being driven around North West Tasmania visiting producers that were part of the Cradle To Coast Tasting Trail he and Catherine were instrumental in launching, remains a highlight of my time in beer; just sit back and soak in the stories of a life well lived – and frequently seasoned with beer – over several decades.

He might have retreated to his own little kingdom yet possesses a depth and breadth of knowledge on beer in Australia that stretches back to before the country's first "craft beer". So what does he make of where we've got to now?

We haven’t gone broke and we haven’t gone mad (yet). For a small business in our 12th year of operation, that’s a reasonable measure of success. We’ve also survived two major floods, bushfire situations and all manner of external and personal slings and arrows.

Seven Sheds Brewery provides an income – admittedly, a modest one – which sustains both my partner Catherine and myself. We also currently have seven part-time and casual employees on the payroll, including our brewer Paul who has worked for us since 2013. We’re proud that we’ve created those jobs in regional Tasmania.

A recent highlight was travelling to southern Poland in August for a collaboration brew with Pinta brewery. A group of their owners visited us in 2016 and we were able to return the favour. Previously operating as gypsy-brewers, they had commissioned a new brewery shortly before our visit. We were Pinta’s first international collaboration using their shiny new kit.

Drinking our own beer at the end of each day is an ongoing highlight and the main reason we started Seven Sheds. We brew beer that we want to drink ourselves.

One lowlight was pouring a Paradise Pale for Prime Minister Scott Morrison at an event in Devonport earlier this year, only for him to disappear into the crowd without paying. The age of entitlement was palpable. You still owe us $8 for that beer, ScoMo!

We always knew that competition was going to arrive but the sheer number of new openings has been staggering. When we kicked off in 2008 we were Tassie’s fourth craft brewery, now there are close to 40 brewers or beer “entities” operating. At least five of our former Hobart customers are now our competitors – bars or outlets that have started their own brewery or are having beer made under contract.

We’re not really sure when it all might slow down but, at present, the craft beer category is like a runaway train.

You really hope most of these new players haven’t over-borrowed finance based on ambitious forward growth projections. History tells us an economic correction is just around the corner.

I’m constantly concerned about the physical and mental health of craft brewers. There’s a strong macho streak in parts of the industry that basks in the bravado of long working days and a gung-ho attitude to life. Here in Tassie we’ve had the tragic example of a colleague who took his own life. We need a more supportive, nurturing culture.

Finding a hobby that doesn’t involve beer and, ultimately, transitioning out of craft beer. We’re already exploring avenues on both fronts.

I’ll be in my mid-70s by 2030 and don’t imagine I’ll still be wrangling kegs and suchlike. But I hope I’m still an enthusiastic consumer of craft beer and a mentor, perhaps.

Excise on a similar level to the US craft industry.

You can ready Bert Spinks' interview with Willie on the brewery's tenth anniversary last year here. 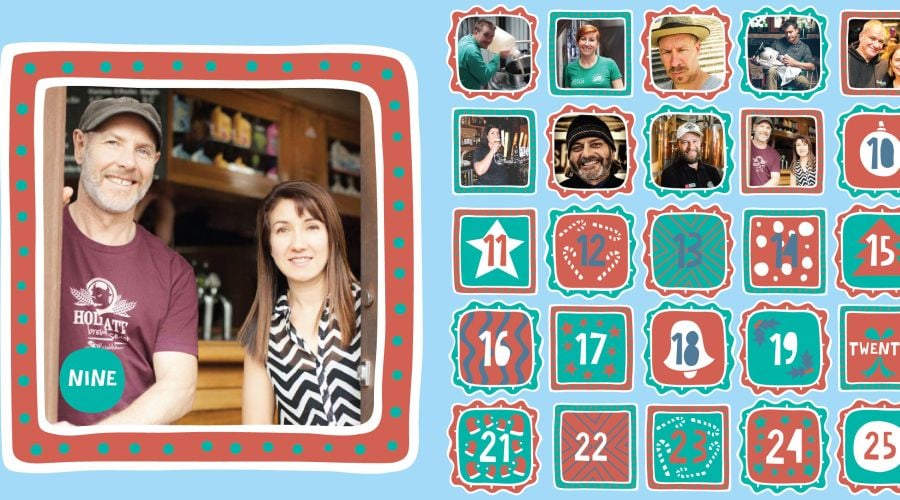