Take a look around Victoria and there are plenty of brewers with runs on the board, people who've contributed to their town or region's appeal or brought local beer to places where there was none.

Bridge Road Brewers have been welcoming all-comers to Beechworth and exploring beer styles aplenty for a decade and a half, while down the road Bright's ever-expanding offering has been sweeping tourism awards for years.

There are breweries dotting the Mornington Peninsula today, but it was Karen and Dave Golding who struck out first with Red Hill Brewery, while to the west of the city Prickly Moses and Red Duck led the way. The ESB from Hargreaves Hill was a game-changer for many when it first appeared – one of many great beers to appear from the Yarra Valley brewery over their lifetime. Predating them all is Grand Ridge, now into a fourth decade of brewing.

Yet given the momentous year they've had, we thought it only fair to invite the Holgates to be part of this end-of-decade series. As they year came to a close, they celebrated their double decade and, soon afterwards, opened their long-mooted Visitor Centre + Taproom. Both of those occasions followed the installation of their high-end German brewhouse and further developments are progressing too.

Their story is also one of the most classic of contemporary craft beer stories: trips overseas inspire them to want to create beers with more flavour and character than are on offer in Australia; they build a brewery in their house and set about brewing, packaging and delivering themselves, often with tiny children in the car next to the kegs; and, over time, they grow (the move to Woodend's former Keating's Hotel arguably the biggest single step) and both improve and broaden their beer offering, collecting trophies and gold medals here and overseas for beers as varied as their Temptress Chocolate Porter, Sour Brett Ale and Millennium Falcon IIPA.

They continue to run the business as a family too, something made stark at their twentieth birthday celebrations. Two of the staff serving drinks were their kids; Emily was a baby when Paul released his first beer, James yet to arrive.

So, as they make their way through their third decade we asked them to take a look back and forward.

Paul: We’ve had many highlights and achievements over the past ten years, however picking a single highlight would have to be the achievement of celebrating twenty years in business and commercial brewing together with many past employees, local community and suppliers. Sharing this moment with people who have helped the business achieve this was very special, particularly as we were able to do so in our new taproom and expanded brewing operations.

Tash: Raising over $700K from investors through the crowdfund has capped off a busy double decade! The money raised was the largest sum for an Australian brewery in a crowdfunding campaign. The support we've had from everyone has been awesome. There are a lot of people that want to support independence and local businesses.

Paul: While IPAs are the mainstay of many hardcore craft beer drinkers, the Aussie scene as a whole has not taken to the more extreme or higher alcohol IPAs as much as the American craft beer scene. In the USA, IPA has been the number one selling style amongst craft brewers for some years now, while in Australia it’s far from the case. I think it’s because in general the Australian drinking public are looking for lighter/lower ABV styles and the excise tax structure – based on ABV not volume – makes these styles very expensive for the consumer. In the USA, excise tax is the same for a litre of 4.5 percent pale ale as for a 7 percent IPA.

Tash: We have seen a huge growth in the interest in craft beer over the last twenty years. In the last ten years, we have seen that interest spread to a wider demographic, such as traditional mainstream beer drinkers, more females and younger people. The popularity of cans has certainly helped capture new drinkers too!

Tash: It's exciting times for the craft beer industry and for beer tourism. Visiting breweries and sampling beer is a fun thing to do. There are many amazing venues around.

Our venue, for those who haven’t visited, is a mix of old and new. We have the historic Gold Rush era hotel with gorgeous leadlight windows plus the state of the art new brewhouse and taproom.

Paul: For sure a better work-life balance is a key goal for me; it’s been a very full last few years and I would love to have more personal time for family and myself as I enter the next phase of my life and career, particularly thirty years since starting homebrewing and twenty years in commercial brewing. This will be possible as the business hits growth targets enabling me to take off some of me various “hats”, ideally handing over to an expanded workforce as we hit profit targets.

Tash: I would love to see more people and particularly more women drinking and enjoying Holgate beer! I'd love for Holgate Brewhouse to be a household name.

Paul: That the craft beer drinking public move on from demanding ever new styles and new brands and the fad of “what’s new” becomes less common. 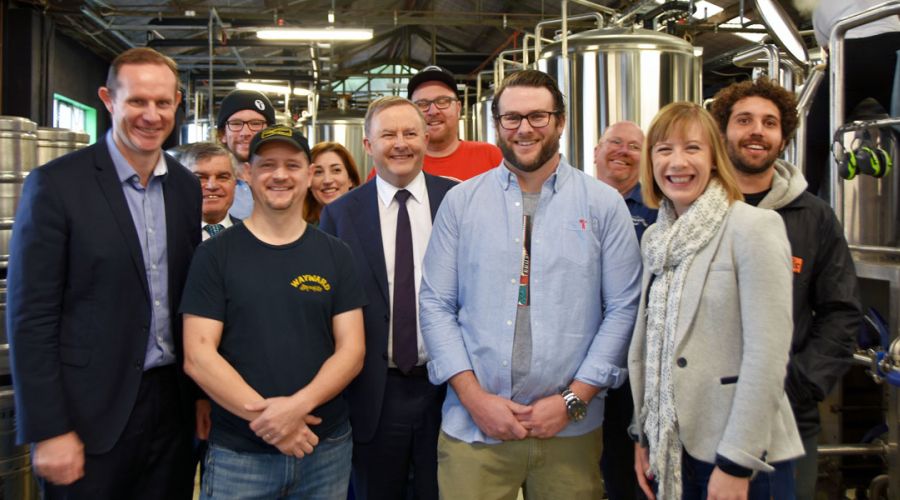