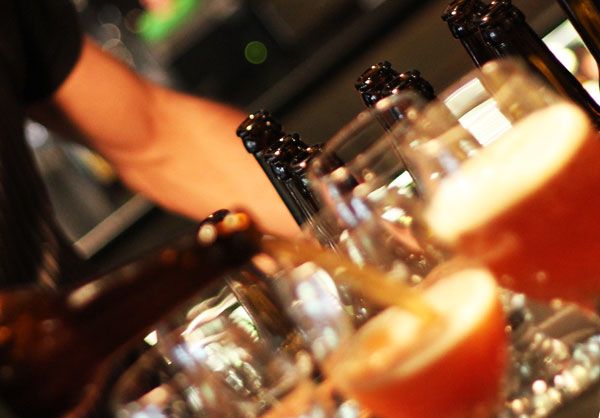 If you appreciate quality beer and are willing to spend that little bit more putting class in your glass, you may as well give said beer every chance to sing. That can mean selecting the right glass to let it open up or pouring it the right way to create the perfect head.

To find out a bit more about the art of the perfect pour, we spoke to Wilson Hede, once found behind the bar at Beer DeLuxe, soon to be found at Temple’s Brewery Bar & Brasserie in East Brunswick, a former entrant in the Australian Draught Master Competition and a man with an encyclopaedic knowledge of all things beer. He answered a few questions and even agreed to be filmed showing us how it’s done. Take it away, Wilson…

Why is the way you pour a beer important?

When a brewer designs a beer, they have a certain idea of how the beer should be served and perceived by the customer. Many brewers fuss over details such as colour, clarity and head retention, not to mention the aromas and flavours too. All beer should be served in a glass to allow the beer to convey its message â anything short of this and the beer may not be the sensory experience you, or the brewer for that matter, expected it to be. Serving temperature is also a significant factor in the perception of each beer, but weâll go into that a little bit later.

What is the perfect pour?

There are two schools of thought on the method for the perfect pour. The first is the method used by most, which starts with the beer being slowly poured into the glass at a 45 degree angle, which is slowly straightened whilst the bottleâs height is adjusted to determine the amount of head produced.

Modern day beer crusader, Randy Mosher, advocates the second method. This involves placing the glass on the counter and pouring the beer straight down into the centre of the glass, again adjusting the speed and height of the pour to determine the amount of head.

Shoot for a generous 1Â½ to 2 finger head on the beer, which should settle to around half a centimetre as you make your way through the glass. A head this size does well to protect the beer from oxidizing too quickly.

With both styles of pouring, be sure not to let the bottle touch the beer in the glass at any point. Iâm sure the many hands and who knows what the beer has seen in its travels arenât particularly good for it.

Watch how it’s done here – then read on below…

The Crafty Pint - The Perfect Pour from The Post Project on Vimeo.

What are you looking for in your beer once poured?

Once the nectar of the gods is in its glass, waiting for you to indulge, take a moment to assess the size of the head, as well as looking for bubbles clinging to the side of the glass. Two fingers of foam is about right for most beer styles and a lacing of foam should cling to the sides of the glass and follow the beer down to the bottom.

Any bubbles clinging to the side of the glass usually indicate that the glass was not clean. These specks of dust, dirt or lint provide nucleation sites, which allow carbonation to come out of solution prematurely, and help degrade the head, exposing the beer to oxygen.

Are there different results for different styles?

Amongst the many beer styles recognised today, each has its own carbonation level which assists in accentuating certain characters of the beer style. A wheat beerâs effervescence aids in its refreshing character and helps lighten the body, where an English bitterâs lower carbonation enhances the maltiness and makes the beer seem fuller than it actually is. These carbonation levels greatly affect the head of the beer too, but you should at least be able to get a thin head from most styles â with the exception being syrupy, high alcohol strong ales.

Why is storing beer important? How should you store beer to maintain it in its best condition? Should different beers be stored differently?

Because many of the aromas and flavours of beer are quite delicate, beer – and especially full flavoured craft beer – should be stored in a relatively cool and dark place with minimal temperature fluctuations. Oxygen (warmer temperatures speed the oxidation process) and light (which causes âskunkingâ) are some of beerâs worst enemies. What temperature you choose to store each beer at should be determined by style, but you should try to keep it below around the 13 or so degree mark.

Lighter styles of beer such as lagers and wheat beers rarely benefit from aging. These styles are designed to be drunk fresh and stored around 4c. This is also true of most hoppy pale ales and IPAs, the oxidation of hop compounds can lead to a beer losing bitterness and the crisp hop character associated with these styles.

When cellaring bigger beer styles, such as Barley Wines, Imperial Stouts, Scotch ales and high alcohol Belgian styles, the higher end of the cellar temperature spectrum is where these beers like to sit. Oxygen can seriously harm a beer, but with just a trace amount in styles like these, it can lend a slight sherry or port-like character to the beer if the beer has been cellared correctly, if you start picking up wet cardboard notes, youâve gone too far.

When choosing an area to cellar your beer, select somewhere that doesnât have a large daily temperature swing. Having the central heating on at 25C all day and then having the beer dip to 5 to 10C at night isnât great for it. Seasonal swings arenât as bad, as it is the repetitive heating, in particular, and cooling cycle that will damage the beer the most. A lightstruck character is never pleasant in a beer, so store those cellar-worthy gems in as sealed up box, black garbage bag or go the extra mile and dig a hole in your backyardâ¦

Why should different beers be served at different temperatures?

All beer styles have their own optimum serving temperature but a good starting point is to serve lagers and light ale styles at around 4C, most ale styles from around 8C, while bigger beers sit comfortably from 10C and upwards. Serving many styles, especially ales, of beer too cold can stop the aromas and flavours from opening up properly and can cause out of place of flavours to appear. In my own experience, I have had Chimay Blue take on a metallic, iron like note when served too cold but when allowed to warm, the flavour disappears completely.

Cheers, Wilson. Time to get digging that hole in the back garden.

Thanks to Alister and Lucy at The Post Project for filming and editing and to Beer DeLuxe for the beers and permission to film.

If you like the video and feel it could be of use on your site, feel free to embed. You can find the code here.