"They've been very understanding, but it doesn't break your heart any less," Hamish Coates says of the decision to stand down 20 of Rocky Ridge's 23 staff.

"They're our best mates and we go to work with them every day."

Earlier this month, Hamish was in Japan and able to witness the steps being taken to tackle the spread of COVID-19 in a country further along the curve than Australia. Yet the Rocky Ridge founder wasn't to know just how fast things would move upon his return to Busselton.

He made it back into the country just before the mandatory 14-day quarantine for anyone returning from overseas was introduced and found himself thrown straight into crisis management mode.

"From Monday last week [March 16] to now, everything has completely changed. The rules have changed almost daily for us so it's been really difficult to stay ahead of what we can do."

The changes at Rocky Ridge – a brewery that, until now, had been riding a wave of adulation and acclaim, growing fast on the back of an admirable ethos and great beers – have been drastic. The business he launched with partner Mel just three years ago has not only had to stand down almost an entire staff but also reduce the hours and change the roles of those that remain. Hence the heartbreak.

"There's a huge human element; we've had to let go a whole load of really good friends – stood down because we can't guarantee anything right now," he says. "We've gone from a team of 23 to a team of three in the space of a week and that's not pleasant at all.

"We had a couple of good mates working at the venue in Perth and had to shut that down. We couldn't do takeaway food at Darleen's so that's shut indefinitely."

Depending on how long the current conditions remain in place, that closure could easily become permanent.

It's a situation myriad business owners in the beer and hospitality industries have been going through at the same time. Casuals have lost employment in the thousands. Many staff have been stood down, some later let go for good. Sales reps, bar managers and brewers are now staffing pop-up cellar doors or carrying out home deliveries. And no one knows how long it will be before they can even start to return to normality – whatever that will look like – in a sector of the economy hit as hard as any.

Go back a month and, as well as their production brewery, Rocky Ridge were operating a cellar door in Busselton, had just launched a pop-up venue in Subiaco, and also ran Darleen's, a craft beer bar in Busso as good as any in the country.

On March 18, Hamish posted a message confirming they were keeping their venues open; two days later they announced Darleen's was to close, with the four square metres per person directive making the venue unsustainable. Now those staff that remain are keeping busy packing and delivering online orders or filling growlers at the cellar door, now operating on reduced hours.

"The biggest thing is the uncertainty: will they shut down everything completely tomorrow? Will we go into isolation?" Hamish says. "From my point of view, that's the hardest part of the lot. If we said everything was going to shut down for two months and then be open we could plan around that; that's clear. Right now, it could be six.

He says the difference between the behaviour they witnessed in Japan – "under control and no hysteria" – compared to here, with panic buying and people flooding beaches and parks in defiance of social distancing advice, has been stark. Meanwhile the time since he returned – during which he's been tested for the virus and given the all clear – has been nothing short of turbulent and the personal toll heavy.

"On Friday [March 20], we sat everyone down and said we can't continue on. We said they could all take their annual leave and pay as a lump sum. And everyone was stood down indefinitely," he says, with the one small crumb of comfort they did it before Centrelink was overwhelmed the following Monday.

Now, as they look to keep cash flowing as best they can via online orders and the cellar door, where they've introduced a "pay what you can" policy for growler fills for anyone out of work, it remains a case of watching, assessing and adjusting, all with little idea of what lies ahead.

"It's really hard to know," Hamish says of the brewing company's future. "We're doing everything we can to work out what this looks like, looking at pay cuts so we can keep as many people on.

"I can't see anyone staying on unless decisions are made quickly about how this shutdown operates. People aren't taking self isolation seriously and that's a problem.

"It really scares me that people aren't taking it seriously as this is all about timing. If this takes six months, there's a chance none of the venues reopen and [Rocky Ridge] is back to Mel and I. I think we'll survive but in what form I've no idea and I don't really want to think about it."

Like many in the craft beer industry today – and the industry as a whole – they'd been on a speedy upward trajectory. While most accepted such a rate of growth, particularly in terms of new entries to the industry, wasn't sustainable and a rationalisation was expected, the measures needed to tackle the spread of COVID-19 risk dealing a hammer blow to the local beer industry and the wider community of which it's part.

"We're relatively young and have expanded a lot and that's partly to blame, because if we don't rein it in it could get really nasty for us," Hamish says, suggesting a lengthy shutdown could also deter people from heading out even once restrictions are eased, instead looking to "squirrel away" any government stimulus that comes their way.

They're already wondering if they'll need to change the style of beers they make to meet potentially altered demands of beer drinkers – goodbye Rock Juice, hello shelf stable session ales. Such concerns – and the existential threat to Rocky Ridge and hundreds of similar businesses – are, of course, just part of a wider picture.

"For us right now it's day by day," he says. "We just really hope it's dealt with really quickly and in a smart way and doesn't deteriorate into the situations we've seen in other parts of the world. Let's just stop this thing so people don't die."

Returning to the beer world, he says he's "gutted" for the industry and unable to find any cause for optimism.

"We've got to do what we've got to do," he says, "so we can hopefully employ everyone again when it's all over."

UPDATE FROM HAMISH (3/3): He has been in touch to say the proposed JobKeeper payment will enable them to keep on 70 percent of staff and says they've "been absolutely overwhelmed" by support through their website.

Articles by James
#keepinglocalalive postcards from the edge rocky ridge 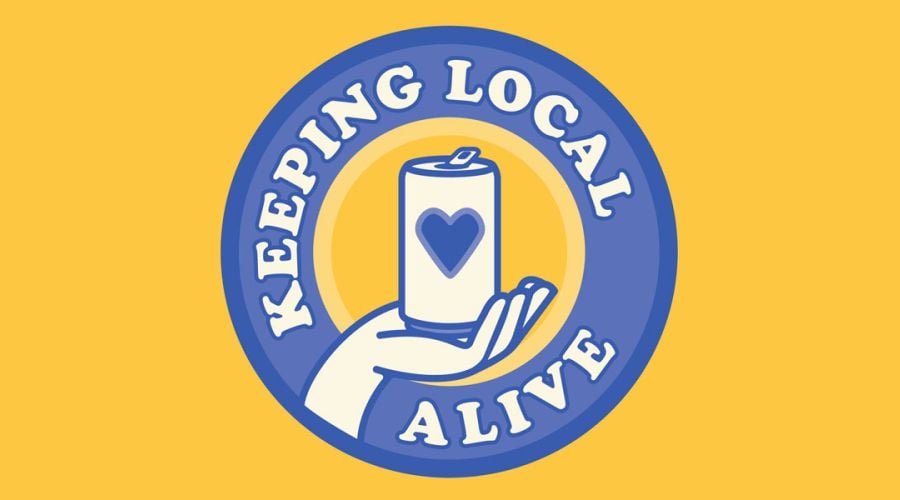 A Year On The COVID Roller-Coaster – Part II

Following on from our look at the impact of COVID-19 on the brewing industry, we switch our focus to hospo, retail and beer lovers – one year on from the day the country was closed for business. read on The Winston name is one that shares a close connection to craft beer in Tasmania and, while the North Hobart pub might be temporarily shut, Winston Cellars has opened with some slightly serendipitous timing. read on