Just a few short months after breweries in Australia and across the planet brewed Resilience Beer, a collaboration to support those affected by Australia’s devastating bushfires, small breweries are again brewing together to support local communities.

All Together Beer is an international collaboration dreamt up by New York’s Other Half Brewing that aims to provide some relief to hospitality workers who have been financially affected by the closures caused by coronavirus. It sees breweries create an IPA – either to a West Coast or New England style – although breweries are encouraged to put their own spin on the beer.

Matt McIver, co-founder of Range, says they went for the hazy IPA approach because, when you love brewing hazy beer and Other Half hand you a recipe for a such a beer, you don't think twice. He says they wanted to give back to those in their local community who work tirelessly to make Brisbane’s hospitality scene what it is.

“Other Half are leaders in the industry in both brewing and the way they run their business and we thought it was a great idea to get involved and show that we are all together in this industry,” Matt says.

“I think it’s a well known fact that the craft beer industry is a very friendly and collaborative industry but with this whole situation that’s arisen it’s become even more evident.”

Range are using the money raised by the beer to supply pizza and tins of the All Together Beer to as many people left out of work as they possibly can, with details set to be announced through the brewery’s Facebook.

“We wanted to provide a meal and a beer for people who haven’t been able to treat themselves recently,” Matt says.

Further north in Bundaberg, Bargara Brewing have given their beer a tropical twist by brewing a mango New England IPA. Brewery founder Jack Milbank says they’re selling it in 500ml cans with a portion of the sale going directly to their venue manager who – like many hospo staff – doesn’t qualify for many of the government support measures.

“We’re giving her $2.50 per can because she’s been with us for less than a year and doesn’t qualify for JobKeeper or anything,” he says.

Jack says they always like to explore new beer styles and, despite the brewery not currently being open, they hope their regulars will find pleasure in their ongoing limited releases.

“People still miss a speciality [beer] and a good beer and they can still have this as a treat on a Friday night,” he says.

Brick Lane and Carwyn Cellars, who worked on the All Together Beer together, were similarly inspired to give back to the people who make hospitality such a vibrant industry. General manager Paul Bowker says their staff – particularly sales reps – have seen the strain the current situation has had on people they work closely with up close.

“We wanted to bring back a bit of a pleasure and a treat for people in their life, so we wanted to get a high quality, readymade meal into people’s hands,” Paul says.

To do that, the brewery and bottleshop paired up with Shane Delia from Melbourne eateries Maha and Biggie Smalls, who launched Maha Go as his own businesses started to close.

“He’s obviously been massively impacted and seen the impact on his staff,” Paul says.

The beer is available through Carwyn and Brick Lane’s web stores and Paul says the presales of All Together have been encouraging.

“Everyone’s dollar is incredibly valuable and if they can spend it in a way that gives back, everyone’s embracing it and getting on board,” Paul says.

“Everybody loves the sense of community and wants to be a part of it. When times get tough … your mind focuses a bit more on how you can help others and that’s happening all through society at the moment.”

Like Range and Bargara, Brick Lane’s All Together Beer will be a hazy IPA. Paul says it’s the most hops they’ve used in one of their beers; they decided to brew a hazy so head brewer Jon Seltin and his brew team could explore new territory for the brewery too.

“Jon was really keen to experiment with a few things he’s been thinking of so this is the perfect way to do it," Paul says. "And Jon and his brewers are having a ball.”

Bargara Brewing's All Together Beer is available through the brewery's webstore, as too are those from Brick Lane, Carwyn Cellars, Mr Banks and Range. Rocky Ridge are brewing theirs with Besk and Mane Liquour and the beer will be available from those retailers. Hospitality staff who have been affected by coronavirus should keep an eye on the relevant social media pages to find out how to sign up for a meal.

Articles by Will
#keepinglocalalive Postcards From The Edge all together beer 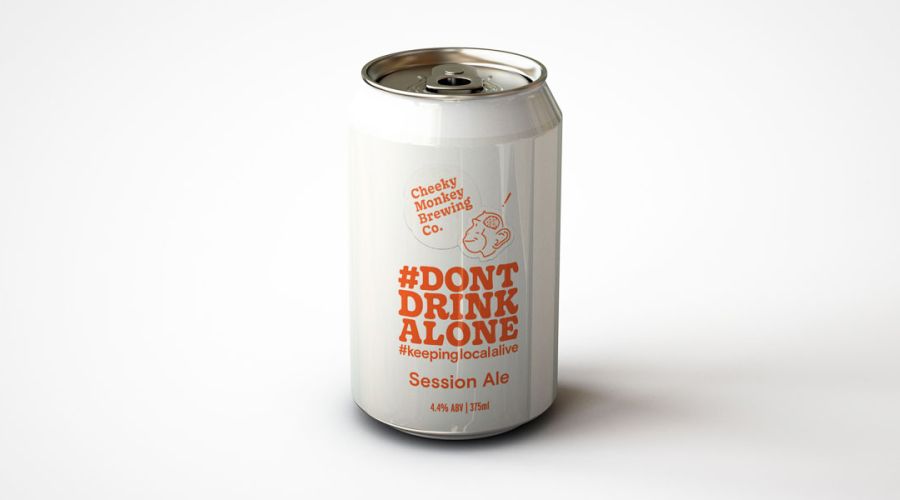