A few months ago, we brought you word that a new brewer had taken over the reins at Tooborac Hotel & Brewery. And it seems that Chris Haren has wasted little time putting his own stamp on the beers at the old bluestone hotel just over an hour north of Melbourne. The old recipes for the brewery’s staples – the Stonemasons Pale and Woodcutters Amber – have been abandoned for his own, while he’s also been playing with barrel-aging and knocked out a funky Belgian Abbey style ale earlier in the year, all of which suggests a rather more adventurous approach than before.

“I worked with the previous brewer one day a week for a year then took over full time in January wanting to turn things around,” he says. “The idea was to get some new beers out there and also to brew some consistent beers.”

Prior to joining Tooborac, Chris says he was a “mad scientist” brewer, one whose dedication resulted in him taking over half of his home with equipment but who kept his passion to himself to the extent that even some of oldest mates didn’t know about it. Since turning that passion into his job (by pestering Tooborac co-owner James Carlin to give him a chance), he’s overseen a number of changes to the brewery originally purchased from the Rifle Brigade Hotel in Bendigo. As well as the new recipes and beers, there are new labels, the tiny bar area adjacent to the brewhouse has become an impromptu store room as production is ramped up, and he’s built a new mashtun, utilising the metalwork skills he once put to use in the film trade when, in pre-brewing days, he built sets on the likes of Wolf Creek.

“We did the Rabbit Trappers Ale earlier in the year, which was a Trappist style beer, and a full-on robust stout using all dark, black malt for winter that is very much how I like my stouts,” he says. There is also a little of the Hogshead remaining behind the bar, a dark ale that spent two months in a merlot barrel from a Heathcote winery. A fresh batch bubbling away in the barrel is likely to be allowed to “funk up” for a year before being released next winter. 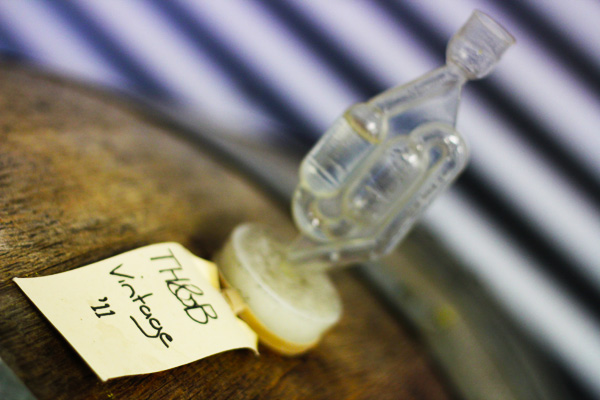 The 2011 Hogshead getting its funk on

Now that he’s made the changes he wanted at the brewery – and been given a rather attractive, hand-carved brewing paddle to boot – they’re “upping the ante” with a packed brewing schedule, which should see 35 more brews knocked out between now and Christmas. A dark ale is set to join the roster in the coming weeks while Chris is keen to brew a saison in time for the warmer weather. No matter how busy it gets, however, he says his door will always remain open for visitors.

“I’m here five or six days a week and even when I’m not here, the staff at the hotel will usually bring people over. I don’t want it to be a stiff setup where you have to book for a tour. If I’m in here and there’s steam going off from the kettle, then I love having people in and introducing them to the brewery.”

Tooborac Hotel & Brewery is open seven days a week, offering meals as well as drinks. The brewery is located to the rear of the main hotel in a bluestone outhouse.