When British beer writer Pete Brown visited Bendigo a few years ago while researching Three Sheets to the Wind – his quest for the meaning of beer – he had what can perhaps be best described as a mixed experience. He enjoyed the town, in particular the hospitality of the locals, but failed to find much inspiration in the beer culture. In fact, such was his disappointment at what had been done to the Shamrock Hotel at the time, he suggested it would make a good destination for any pyromaniacs with time on their hands.

As recently as two or three years ago, he could have returned to find little had changed: hotels all selling the same commoditised beer run by publicans without any interest in or awareness of the changes happening within the Australian beer scene. Yet, slowly but surely, the times they are a-changin'.

The first crack in the wall was the arrival of The Dispensary Enoteca, a tiny bar and restaurant in Chancery Lane, a nook-like alleyway off the town’s main drag. Opened by Tim Baxter, a man with a lengthy background in hospitality and the wine industry, it is a venue dedicated to excellent food, wine, coffee, beer and spirits; essentially, excellence all round. In the past few days, it’s appeared in the Good Food Guide with a score just half a point short of Chef’s Hat status and was named in the top three in the Gourmet Traveller Restaurant Awards Wine List of the Year. Capable of seating just 22 inside at one long table and a handful of smaller ones, augmented by some bar seating and a smattering of tables in the laneway outside, it regularly hosts events that make a feature of one of its drinks offerings: wine dinners; beer masterclasses; even a gin tasting that made use of Tim’s 30-strong gin list. 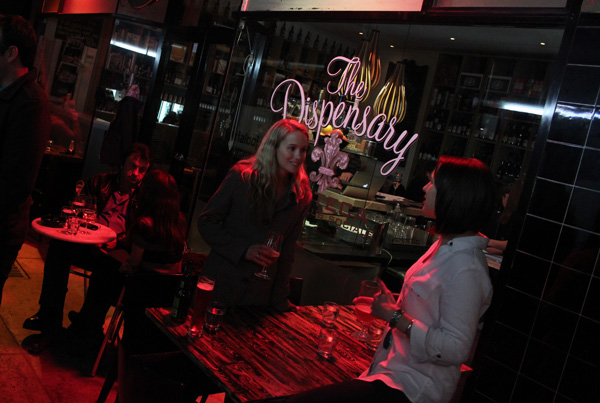 Late night outside the Dispensary (also pictured above)

As for the beer list, it currently stands 85 strong and includes enough styles, from saisons to imperial IPAs, and big hitters such as Brooklyn Brewery to satisfy the most demanding of beer lover. Local representation is limited for now – Holgate, Bridge Road, Boatrocker and a couple of others make an appearance – although, according to Tim, this is as much to do with Victorian craft breweries' reluctance to send their beer to Bendigo; he’s ready and waiting for your calls, brewers!

A few months ago, a couple of mates working for Bendigo Bank* who had become regulars at the Dispensary and who would travel often to Melbourne and Victoria’s microbreweries to sample the beer fineries on offer decided it was time there were more places with good beer in Bendigo. They started having a word in the ear of friends, relatives and footy acquaintances who worked at or had links with pubs and hotels, while encouraging craft brewers to look at getting their beer into town. It helped that one half of what was to become Bendigo Beer, Trev Birks, knew Bridge Road founder Ben Kraus well, but also that the other half, Justin McPhail, is a fully fledged beer geek. They started getting the odd bit of fridge space and the occasional tap and a movement was born.

Since then, they’ve held a couple of home brew competitions that have opened up judging to the public and, in turn, drawn around 100 people each time willing to sample and vote on the entries. The odd Sunday session has helped and now there is a handful of places where you can find the likes of Little Creatures, Stone & Wood, Bridge Road, Holgate and Sierra Nevada. 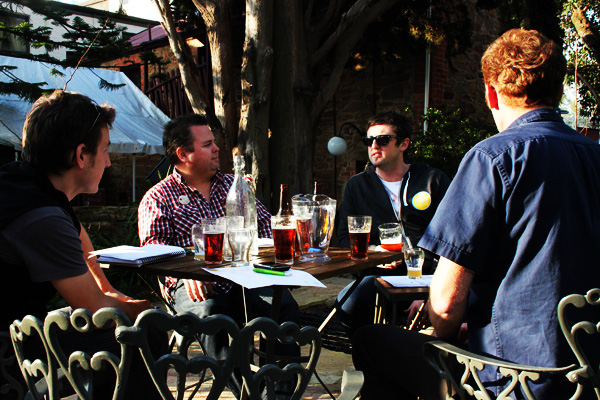 The Golden Vine, an old corner pub with regular live music and a couple of pool tables a few minutes saunter from the centre, was pouring Beechworth Pale and Holgate’s ESB and Pilsner when we dropped in. Meanwhile, on Friday, Saturday and Sunday nights, the Basement Bar – a tiny, bare brick-walled venue facing the Alexandra Fountain – opens for live music, occasions that, if our experience is any guide, can get pretty lively. It’s run by Scott Seymour, who moved to Bendigo from Melbourne and decided it needed an injection of the capital’s nightlife. Thanks to the efforts of Bendigo Beer, the fridge is now well stocked with craft beer and the staff are trying to work out how to rearrange what little space they have so they can squeeze in more.

Also showing promise is the place Pete Brown described as “an American Wild West saloon trying to disguise itself as a wedding cake” – the Goldmines Hotel. An historic, two-storey hotel complete with archetypal lacework verandah a few kilometres out from Bendigo’s centre, it’s been through multiple owners in recent years and is now in the hands of a couple who recently moved north from the Mornington Peninsula. For now, the bar has just two taps (two more than when Brown visited) pouring 2 Brothers and Holgate, and the bottle list is best described as a work-in-progress. However, it was the venue for the latest Bendigo Beer home brew comp at which we judged and spent a great afternoon soaking up the sun in a beautiful beer garden for which the owners are apparently indebted to a particularly dedicated relative. With much of the hotel’s charm retained and co-owner Fatty Anderson having asked the Bendigo Beer boys to write his beer list, here’s hoping it follows through on its promise. 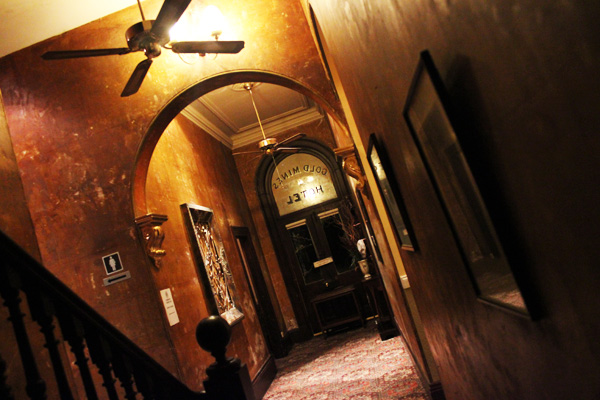 The main hallway at the Goldmines Hotel

Elsewhere, the Rifle Brigade Hotel, which stripped out its brewery a few years ago to become instead a polished boozer, has James Squire on tap but you can’t help but feel the town lacks a key craft beer venue, a pub with an owner or manager who is fully bought into and understands quality beer and can make it work. Dispensary owner Tim has plans for a new venue that could turn out to be just that, while Trev intends to take over a number of taps at the Farmers Arms in nearby Junortown when it reopens.

In the meantime, the Bendigo Beer guys will continue working one tap and fridge shelf at a time, as they did when shifting two cases of Stone & Wood Pacific Ale to post-work Friday drinkers at Hu Ha last week. All of which, in conjunction with an establishment like the Dispensary that puts most Melbourne venues to shame with its across-the-board quality, suggests there should be far less need for visiting beer writers to noise up the neighbourhood pyros in the future.