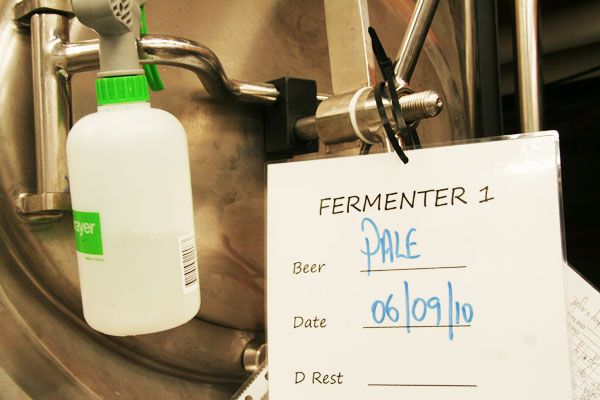 Mornington Peninsula Brewery doesn’t celebrate its first birthday until October 1 yet today, when brewer Andrew “AG” Gow pours grain into his mash tun, he’ll be embarking on the brewery’s 100th brew. Exactly one year to the day from when he made the first ever beer at the brewery near Mornington Racecourse – a Pale Ale – he’ll be back in the same spot working on a Marzen for the brewery’s first Oktoberfest at the end of next month.

“One hundred brews in a year is pretty good,” he says. “If you’d have asked me a year ago, I’d have thought that we’d do 50 or 60 but the beers have been proving pretty popular, we’re finding a few outlets and have got the packaged side of things up and running.”

The brewery originated in a conversation between friends while watching the Grand Final back in 2008. Two years later, it opened, with one of those friends, Matt Bebe, taking the helm and AG brought back to his home state of Victoria from Sydney to head up the brewing side of the business. Having quickly developed a good reputation for the high quality of their beers, they’ve recently installed extra tank space in the brewery, while AG now has an assistant brewer with plenty of experience in the local microbrewing scene.

“The general feedback we’ve had is that we’ve hit the ground running with beers that have been up to a certain benchmark,” says AG. “If I did brew something that wasn’t up to scratch it wouldn’t see the light of day as you have to maintain [your standards]. There’s a lot of people out there who, if you put out something below par, they’ll know.”

He puts much of their flying start down to the fact that, while many Australian micros are started by people taking the step up from homebrewing for the first time, he’s been doing it for years, spending a period at Mountain Goat before heading interstate. As for his pick of the beers he’s put out in the past 11 months, he’s pleased that he hit the target with his Pale Ale straight away and enjoyed the Kolsch made with Sorachi Ace hops, then new to Australia. Neither are his top pick, however. 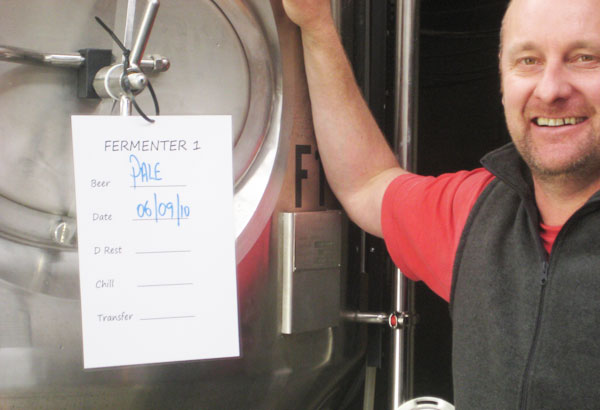 AG with his very first brew at Mornington Peninsula

“The Imperial IPA was probably my favourite,” he says of the beer that made up part of our Crafty Curates tap selection during May’s Good Beer Week. “For 8.5% it was really balanced. We’ve got another batch now that I think is even better than the first one.”

As for future brews, there are plenty of ideas being floated around: strong Belgian dark ale, ESB, pilsner; more than enough to keep his growing band of followers happy.

Mornington Peninsula Brewery’s first Oktoberfest takes place from October 28 to 30. Full details are still being worked on, but alongside the Marzen will be a return for the Hefeweizen first brewed last year and staff in lederhosen.