Ready For The Off

The program has been finalised for Newcastle’s first Craft Beer Week, with 17 events taking place across 11 venues between November 21 and 27. The Hunter Beer Co, based nearby in the Hunter Valley, has also rescheduled its Oktoberfest for the weekend beforehand for anyone keen to get a little practice in beforehand. Over the course of the seven days, breweries from across Australia will be represented with guests including a number of head brewers, including Aussie brewing legend Chuck Hahn, and Beer Diva Kirrily Waldhorn, who is hosting a Women & Beer session on the opening evening.

The festival has been driven by Corey Crooks, from Newcastle’s Albion Hotel, and Mark Mead, manager of the Warners at the Bay Bottleshop, who have brought the local council, newspaper and Australian Hoteliers Association on board as supporters. Newcastle City Council is printing posters, flyers and programs, the Newcastle Herald is producing a lift out magazine in the weeks before it kicks off, while the AHA has offered financial support.

“It’s all been pretty smooth,” says Corey. “The aim is purely to spread the craft beer message further afield, to open a few of those eyes that still think beer’s about Toohey’s New and VB.”

They’ll be doing that with the aid of beers brewed from Swan Valley to Sydney with a list of beers that includes those from Feral, Little Creatures, Holgate, 4 Pines, Burleigh Brewing and many more. Events include Meet The Brewers sessions, beer and food matching lunches and dinners, masterclasses, BBQs and tastings. The venues hosting events are:

The official Newcastle Craft Beer Week Dinner is on the Thursday evening, with a seven-course degustation featuring beers from Stone & Wood, Feral, McLaren Vale, 4 Pines, Mountain Goat, Murray’s, Hunter Beer Co, Burleigh Brewing and Holgate. Among the beers will be two special releases brewed for the week. The festival closes with Warners on the Bay’s 5th Annual Beer Festival, where 30 breweries will be showing off their wares. 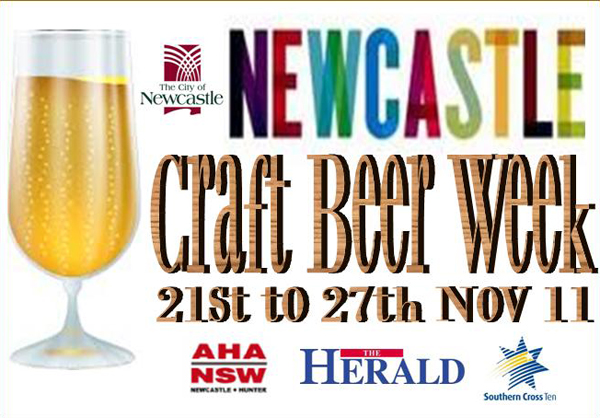 “The biggest thing is getting the message about craft beer out there and raising awareness of both the brewers and the venues,” says Corey. “We also want to have some little events that take place all throughout the week, whether that’s venues pairing some of their dishes with a beer for a set price each day or holding Beer 101 sessions for small groups throughout the day.”

The best way to keep tabs on developments – and to find out when tickets for individual events will be on sale – is via the Newcastle Craft Beer Week Facebook page. Over time, each event will have its own page created here.

(Photo at top shows Warners at the Bay Bottleshop, host of the closing event)