An easy two-hour amble from the centre of Adelaide is the quiet little fishing and port town of Wallaroo on the Yorke Peninsula. The full-time population sits at just over 4,000, however this number grows exponentially come holiday season.

Situated on the main strip in the town centre is a pleasant surprise for visitors: a brewery, distillery and restaurant. Bond Store Wallaroo is owned by Derek and Nicole Matthewman, who purchased the historic 1865 building in 2015.

It was originally built for use as a bonded store for goods unloaded from ships docking in the port, where they would sit tax free until they were ready to be sold. However, prior to the Matthewmans taking over, the building had fallen into ruin, with smashed windows leaving the iconic building looking dilapidated and rundown.

Before launching their multifaceted operation in 2019, Derek and Nicole completed a major renovation of the site, including adding group style accommodation on the third floor. Not only did the couple reinvent the look and feel of the venue, they also built a kitchen, brought in distillery equipment and installed a 1,000 litre brewhouse and accompanying fermenters. As a result, the Bond Store has become the centrepiece of the main street.

Up to twelve different Bond Store beers pour at any one time, covering a broad range of styles from lagers through red ales to a milk stout. They tend to be on the sensible side when it comes to alcohol content, a result of taking on board customer feedback and recognising they're going to be serving a lot of a tourists; that said, they're not afraid to experiment.

The food menu is at the higher end for a brewpub, offering such dishes as saltbush lamb cutlets, grilled octopus, Wagyu beef Rendang, Scotch fillet and five spice fried tofu.

It's evident the Bond Store has already become an incredibly popular place and an important part of the local community, coming to life during lunch and dinner service. What's more, driving through the town and seeing other commercial pubs looking empty, it appears Derek and Nicole are also changing the palates and drinking attitudes of their locals.

We called in to find out more for our Who Brews...? series.

The Bond Store was started by Derek and Nicole Matthewman. We came from a tourism background; currently, we also run two accommodation properties in Wallaroo, both designed for groups – one can sleep up to 70 people, the other 30.

Nicole is our distiller, making some great gins and spirits, Derek can be found out the front welcoming and talking to anyone who wants to listen.

We have our own brew kit that takes pride of place in our ground floor brewery bar. It is great to sit and taste while looking at all of the shiny bling.

We have an affinity for the culture behind microbreweries – “it's the vibe” – plus we love beer.

When I was in my early 20s I was working as a barman in London and didn't like any of the beers we had – I was wondering if it was me! But then I went across to Germany and re-discovered my love for beer: a great wheat beer served in a huge glass with a slice of lemon!

The building our brewery is located in was built in 1865 as a bonded store. We have taken the existing name and love the idea of bonding over a beer. It is rare in Australia that you can drink a beer and know that 155 years ago you could buy the same kind of beer and gin in the same building.

I am loving our session at the moment – I describe it as a reverse mullet – party at the front, business at the back. It starts with a nice, fruit-filled front palate finishing with a nice bitterness, cleaning away the fruit and leaving you wanting for more. Really sessionable and easy-drinking – at 4 percent you can keep drinking it pint after pint. That is a winner for me.

We have two brewers shouldering the brewing load, so I am always surprised by what they have playing. Seems to be always something different.

Also, there is usually a friendly banter and competition between the kitchen and the brewery over who gets the choice of the day.

Our fridge is pretty light on at the moment. We have been really busy and, as we have been working every weekend, no time to get out shopping. With our house 50m away from the beer taps, who needs beer at home!

At the moment we only have them available for takeaway at our venue: we have two beers in can and lots in our growlers. Later we hope to be able to have them canned and available in Adelaide.

We hope that we are still having fun, with a great range of beers and great gin to go with them. We predict that Wallaroo will become one of South Australia's premier tourist destinations, with us right at the centre.

The Bond Store is located at 13 Owen Terrace, Wallaroo. You can find it and hundreds of other good beer spots across Australia by downloading the free Crafty Pint app. 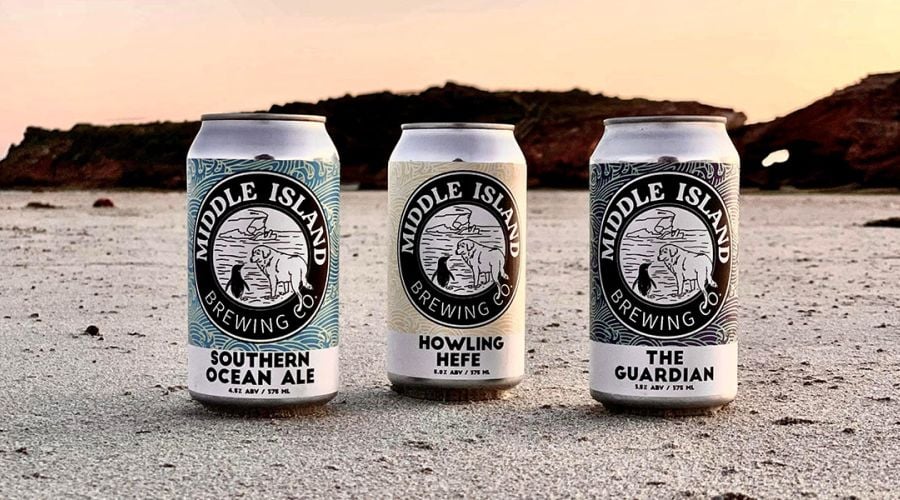