A fresh call for changes to the tough tax regime faced by the country’s craft brewers was put in front of politicians this week. Greens Deputy Leader Christine Milne raised a motion in Parliament calling for amendments to be made to existing legislation that would ease the levels of excise tax paid by microbreweries up to a certain size. The motion didn’t go as far as previous campaigns on the issue, which have called for brewers to be treated in the same way as small wine producers. Instead it asked for the definition of a microbrewery to be changed from one producing 30,000 litres per year to one producing 300,000 litres (meaning more are eligible for the existing excise refund) and also for the $10,000 cap on those refunds to be removed.

The motion, which was instigated by Tasmania’s Two Metre Tall brewery, was voted down by Coalition and Labor MPs but Senator Milne has pledged that the campaign will go on. While the issue has not been added to the agenda for the forthcoming Tax Summit, she says she will ensure it is raised.

“We’re not giving up on it,” says Senator Milne. “This is just the beginning to raise the profile and challenge some of these members. Some on both sides have been to various microbreweries around Australia and are all sympathetic, but when it comes to doing something they don’t have the courage of the commitments that they make.”

Jane Huntington, from Two Metre Tall in the Derwent Valley (see photo above), says: “I’ve been working on this for the last five years. We’ve been building relationships with local politicians and Christine Milne has been very supportive. She has a very pragmatic approach and when we asked what we could do, she said the simplest thing was to try to make some amendments to the existing situation.

“We’ve got it this far so the next step is to approach the Coalition and Labor and try to get people around the table and get something that everyone can agree to.”

A long-running nationwide campaign, A Fair Go for Craft Beer, submitted a petition signed by 6,500 people to Parliament in 2009 that called for more far-ranging changes than those in this latest proposal. It led to Holgate Brewhouse founder Paul Holgate speaking in front of a House of Representatives Petitions Committee question and answer session but, thus far, has failed to achieve the changes it was seeking.

“As an industry we need to share the load,” says Jane. “This is proof that, if you keep putting pressure on politicians, it’s not as if they’re sitting in ivory towers. The more they hear the message, the more they will think it’s a real, serious issue.”

For Senator Milne, part of the impetus for the campaign is to help promote innovative Tasmania producers. She told The Crafty Pint The Greens are keen to build the state’s brand as not just a holiday destination but a place known for high quality food and beverages. They also aim to help local farmers get “out of commodity markets and into the high value niche markets”.

And, while this push has been sparked locally within Tasmania, she sees the potential for widespread benefits.

“Microbreweries have a special place in Australia’s food culture, and they create excellent local jobs in rural and regional areas,” she said in an earlier statement.

“But, while small wineries can claim back all the excise they pay under the Wine Equalisation Tax, only breweries of a very small size that is out of step with industry reality can claim an excise rebate.

“A study in 2008 by Street Ryan Associates showed that, if the government lifted the threshold for microbreweries, tax receipts would actually increase thanks to the growth of businesses. 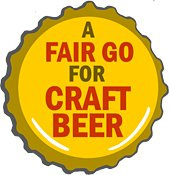 “The Greens want the government to consider this easy step that will not only help small businesses become medium-sized businesses but also help all Australians, when we drink responsibly, to drink great quality Australian beer.”

Looking ahead to the Tax Summit and beyond, she says: “I have told colleagues to get out into their various states to meet the microbrewers and to talk about the contribution they make within the local communities and within food culture.”

THE MOTION RAISED THIS WEEK

That the Senate notes that:

â¢ Microbreweries are important niche businesses in Australia, providing valuable job opportunities and economic growth particularly in rural and regional areas; â¢ Microbreweries need recognition within the tax system through the Microbrewery Refund, given that they are competing in a domestic market heavily dominated by multinational companies; â¢ The Microbrewery Refund was introduced in 2000, and that the definition of a microbrewery has not been reviewed and is now markedly out of step with industry reality; â¢ The maximum excise refund has remained capped at $10,000, while the beer excise has been raised twice a year for the last eleven years with CPI;

Calls on the Government to:

â¢ Amend the definition of a Microbrewery under Excise Regulation 1925 2AB, so that a microbrewery is defined as a brewery that produces up to 300,000 litres of beer annually, replacing the current maximum volume of 30,000 litres; â¢ Amend Subparagraph 50 (1) zzd of Excise Regulation 1925 to remove the maximum of $10,000 excise refund that can be claimed in a financial year. I will continue with this campaign. We’re going into the tax summit and while it won’t be directly on the agenda the government can’t prevent it being raised. It’s the start of what will be a dedicated campaign.

Anyone interested in finding out more or becoming involved with Senator Milne’s campaign can head to her website or make contact with her office in Hobart on (03) 6224 8899.