When we were kids, most of us were told never to get into a van with strangers. But Matt Farrelly and Joslyn Erickson depend on people (all consenting adults) getting in their van to sustain their business.

So, when Queensland's COVID-19 restrictions stopped Hop On Brewery Tours from operating for three months earlier this year, Matt and Jos wondered what the future would hold. Happily, once enough restrictions were lifted and they were able to start running tours of Brisbane and Gold Coast breweries again, the couple were stoked to bounce back with their strongest month ever.

“We thought, 'A lot of people have been out of work… they're not going to have the money to spend on luxuries like going on a brewery tour,” Matt says. "But obviously they're looking for things to do."

Beer tourism has grown up alongside the explosion within the Aussie beer scene over the last decade; as part of the same ecosystem, it's no surprise that beer tourism was also affected during lockdown. But, while breweries and many venues found ways to keep revenue coming in – via packaged beer, online bottleshops, takeaway food options, home deliveries – beer tourism relies on the full experience. When they were no longer allowed to bring customers into the breweries, Matt and Jos' tours ground to a swift halt.

As well as not being able to take new bookings, they had to contact everyone who had pre-booked a tour already. Fortunately for them, most people were happy to take credit for a future tour post-lockdown instead of a refund.

“I think if everyone had've said, 'Give us a refund' we might have been in some financial strife. But people were really good and understanding."

Thanks to this – as well as the fact their business doesn't incur many overheads, since they own their vans and don't currently employ any additional staff – Matt and Jos were able to ride out the shutdown without too much pain, although they point out that, like many during the pandemic: “On a personal level, we've probably spent more money than ever on booze!”

Like everyone else, Matt and Jos didn't really know what to expect when restrictions lifted and they were able to recommence tours. But, after a short period of being restricted to two passengers in a van as per the square metre rule, Hop On was ultimately able to proceed at normal capacity with a COVID-Safe plan – and ended up enjoying their busiest month in four-and-a-half years of operation, with business remaining solid in the following months.

While business is going strong, there have been a few changes in the way they operate. Since venues have limitations on how many patrons are allowed in a venue, Matt and Jos can't be as flexible and spontaneous in the way they run their tours; they need to make sure every visit is booked well in advance and that they stick tightly to their schedule.

They've also been affected by border closures, both international and domestic; since Hop On's midweek trade largely consisted of travellers, Matt and Jos have dropped their trading hours, now only running tours from Thursday to Sunday. But Queensland's closed borders have worked both ways: as well as keeping tourists away, the travel restrictions have encouraged locals to book more tours than before.

"It was actually our locals who got behind us [when we started operating again] ... we got a lot of locals back who'd travelled with us before. Some people were even back for their fourth and fifth tours.

“Obviously, they can't travel overseas, or even to places like Melbourne. So they're looking to spend their money locally. And that's been really good for us!"

And that's how the couple see things for the wider local tourism industry – beer or otherwise.

"I can't foresee international borders opening any time soon, so people have gotta start looking at their own backyard for things to do. 'Cause normally people would be jumping on a plane, going to the States, or wherever it may be. They just can't do that at the moment.”

For Matt and Jos, it's a case of looking to diversify too. And given their background – they met ten years ago when the former joined a tour the latter was leading in Mexico and ended up spending the next six weeks together in Central America – they've got experience outside beer to lean on.

“We're actually branching out into distillery tours as well. Quite a few distilleries have opened up in Brisbane; White Lies is one.

“We're also looking at something called a Makers Tour, which doesn't focus just on beer, so that'll be distilleries, and handcrafted things like cheese and coffee and that sort of thing.”

But beer – and creating new and better equipped beer drinkers – will always be their first love. 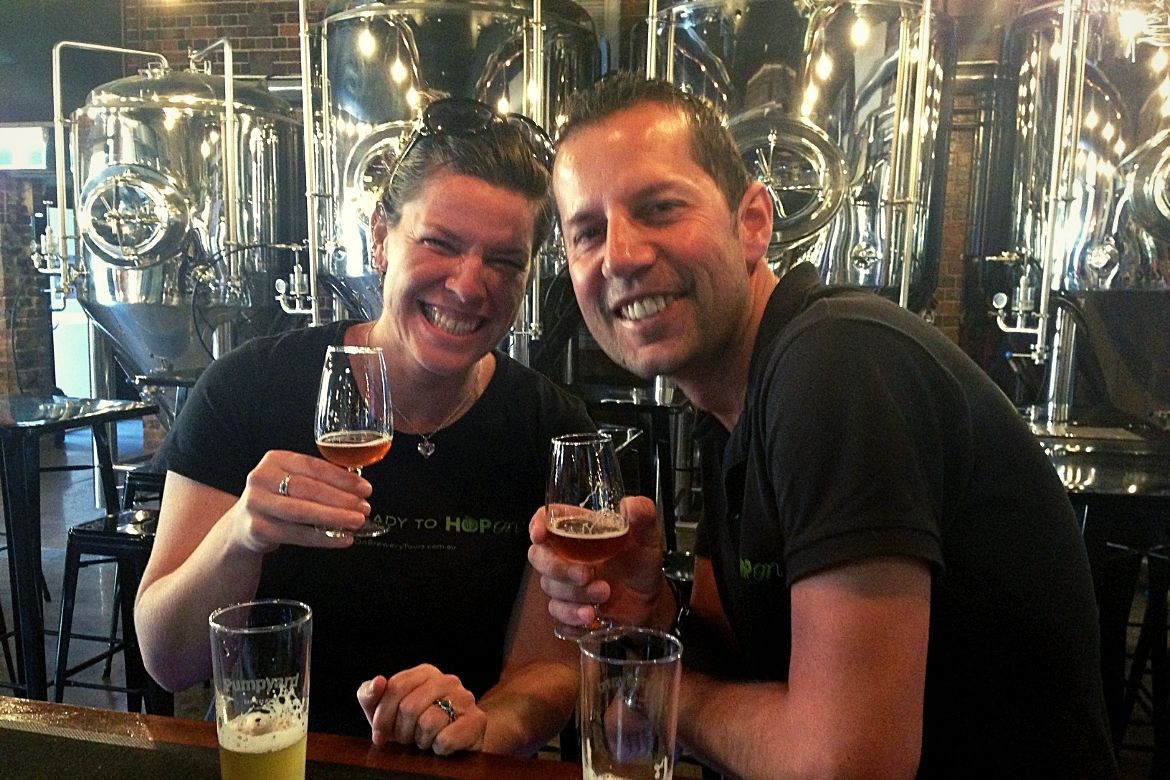 Jos and Matt of Hop On Brewery Tours.

“Our biggest focus is the education and appreciation side of it,” Matt says. “The beer's secondary. Even though people do get a lot of beer on tour, the big focus is really on educating them about the beer, and why they should be supporting local."

They also get a special kind of pleasure from converting the non-beer drinkers they sometimes get on their tours.

“We had a 47-year-old woman on once and she was like, 'Hate beer. Hate it.' And she said, 'Can I swap out for wine?' And we were like, 'Well, will we at least try this one?' So we gave her a gose, and she ended up walking out with a growler of it. And a squealer of Flanders red. It's a good feeling."

Just as it is to be bringing customers through the doors of South East Queensland's growing band of breweries once more.

“We couldn't do what we do without the support of every single brewery and venue who shares their story with us, creates space for our groups, allows us to get behind the scenes and share their beers with visitors… We pride ourselves on the relationships that we've built.

“We want to focus on supporting local.”

As part of the #keepinglocalalive campaign we've been running Postcards from the Edge stories, highlighting the ways in which people are adapting to survive. If you've got a story you think is suitable - or have something to add to the campaign resources online - get in touch .

You can suss out the breweries that Hop On tours visit plus hundreds of other good beer venues around Australia in the free Crafty Pint app.