Opening a brewpub in a suburb that seems to have a limited market for craft beer is a fairly regular occurrence these days. But go back to 2015, when Dereck and Diti Hales opened Bad Shepherd with its focus on local beer and hearty BBQ in Cheltenham, and it was a pretty novel idea.

As the brewery and the couple behind it celebrate five years at the helm, Dereck says the success of the venue has exceeded expectations.

“Our brewpub has been beyond my wildest dreams in terms of sales, we’re booked out most days of the year and that’s an incredible thing,” he says.

Those five years have seen an explosion of local breweries in Melbourne’s south east corridor too, and Dereck says, like many beer drinkers, some of his favourite in the country are those closest to him. It’s a community of brewers Bad Shepherd has always been keen to champion too, including via their regular Good Beer Week festival celebrating south east brewers.

“The breweries that stand out to me are Mr Banks, Dainton, 2 Brothers and Boatrocker, and that’s where I am and they’re all making great beer,” he says.

“So, the conversation has become hyperlocal.”

Though their beer regularly makes it into good beer spots further afield, Dereck says most of it’s still sold within 20 kilometres of the brewery; it's something he believes is true for many of his neighbours too.

“We’re heavily about the south east and we’re really proud to be that, and COVID's probably really driven that home, but local is just everything.”

The level of support during COVID – from local football clubs getting people to buy beer to staff losing shifts – is something Dereck says has really blown him away.

“When push comes to shove, everyone’s true nature comes out and most people have an incredibly good nature,” Dereck says.

“That’s been heartwarming; just how powerful that’s been and how people have supported us. We’ve had people say, ‘I normally drink Carlton Draught’ but during COVID I’m only going to pick indie breweries – and hearing that is pretty cool.”

As for what’s surprised him most over the last half decade, it's the rapid explosion of new styles and experimentation alongside the rising quality of beer.

“Things just keep getting better and different,” he says. “Every year, you really have to be at the forefront of product development and be ready, and you have to be prepared to switch quickly to a new style.”

Keeping in step with the wholesale beer market is a constant challenge but one of the steepest learning curves over the last half decade has been on building the family that now makes up Bad Shepherd.

“I think, personally, learning about building a team,” Dereck says. “Understanding what makes them tick and tapping into that, that’s been an evolution for me.

“You grow up quick when you’re responsible for people’s families and have to ensure their needs are being met, and that’s not just financial but their own personal development too.”

So, if he could turn the clock back five years and offer some advice, what would he tell the younger Dereck?

“Back yourself,” he says. “Be prepared for growth – really rapid growth. I give that advice to everybody and I heard it too but it’s sort of water off a duck’s back and I just kind of moved on.

“Diti and I were talking the other day about what’s changed for us personally over the past five years. We’re more risk averse in our personal life because we’ve now got kids but in our business life, we’re more risk tolerant.

“When you first start you’re really worried about money and making sure everything’s okay, now we go, ‘That’s a good idea: do it.'.”

Ahead of their birthday celebrations this weekend, we asked Dereck to tell us the story of the brewery’s first five years in five beers.

We’ve always been fiercely and proudly Victorian serving as many all Victorian items on our menu as possible including all our wines, soft drinks, produce, most ingredients in our food menu etc. We are first and foremost a local community-focused brewery. I was walking my dogs on the beach one day a few years ago listening to a podcast about a new book by beer historian Peter Symons. Peter was discussing a yeast called Melbourne No.1 that he discovered in a yeast archive in the UK and how it had been resurrected and stored in a vault by White Labs in San Diego. It was isolated in Ballarat in 1889 and was the world’s first viable ale yeast.

My lightbulb moment happened then and there. We should make an all Victorian ingredients beer.

A few weeks of research later and I’d confirmed we could source the Melbourne No.1 yeast from White Labs, Victorian barley from Barrett Burston Maltings, and Victorian hops from Hop Products Australia. We focused the idea on a beer that could be sessionable and approachable to our local community. Our end recipe was an easy drinking pale ale at 4.2 percent ABV with a light dry hop of Victoria Secret and Ella hops. It flew for us from the off and rapidly became our top seller.

When we first opened Bad Shepherd we only had five beers in our range: the three hop-focused beers, a raspberry wheat and the Hazelnut Brown – our only malty offer. We brewed the first batch with 30 kilograms of hazelnuts that we toasted and crushed ourselves with a mallet. The base beer was a darker and more intense version of a northern English Brown. Post-fermentation we added in vanilla and the beer was born.

Intended to provide a beer for those looking for a malt forward alternative at our brewpub, we never expected it to be more than a bolt on to the range but it had other plans clearly.

Two months later our Hazelnut Brown Ale featured in the GABS Hottest 100 at #100 despite only selling our beer at our brewpub and less than ten other locations around Melbourne! It won a gold medal in the 2016 AIBAs later that year and quickly became our most famous product. It has since placed on the GABS Hottest 100 three times and has won multiple awards for us.

It’s certainly the most cultish offering in our range. I’d fear for my safety if we ever deleted it!

Our first big ABV beer and our first intensely hoppy beer, we launched this in August 2016 to rave reviews. It was sold out before we even started shipping.

We held a party at Bad Shepherd that we called Almighty Day and it went off! We brought in strongmen from the Arnold’s Australia competition to press kegs, lift cars and do all sorts of strength feats. Our queue was down the street when we opened and our first annual beer (and beer event) was born.

We now run an Almighty Day every year in late August or early September with all things Almighty, from strongmen to ridiculous over the top BBQ food dishes!

In 2016, we also launched our Brew Crew series. Community and care for our team are at the forefront of our values and purpose so it only made sense to engage our own in giving them all the chance to make their own beer.

The idea is that every permanent staff member gets a chance to make any beer they dream up – brewers are included – with production plans in order of seniority. We’ve completed 13 of these now and each one has incredibly unique stories about the people behind it – from a Rose & Hibiscus Gose from a Kiwi (Hibiscus Coast) with English (rose) background, to a purple colour but peach flavoured Unicorn Beer and a Sticky Date Stout!

Two of the Brew Crew beers (Peanut Butter Porter, Passionfruit Sour) have even gone on to be launched as part of our core range.

In 2019 we launched a Peanut Butter Porter as a part of our Brew Crew Series. It was a beer developed by our head chef whose wife was from Ohio, where a peanut butter chocolate delicacy spawned this idea for a beer. Made with hazelnuts, lactose and rich dark malts the peanut buttery moreish flavour and aroma make it hard to put the beer down.

It was easily our most demanded beer once it ran out. Demand was so high for it that we brought it back earlier this year as part of our core range and it rose to be the top-selling beer in our portfolio throughout the 2020 winter months!

We even ran a pop-up event with a limited version of a peanut butter and jam barrel-aged porter that sold out in under two hours.

To celebrate their fifth birthday, Bad Shepherd have closed Wanrua Street next to their Cheltenham brewpub and putting on a Birthday BBQ with unlimited food, live music, a free can of birthday beer as voted for by general public and one-off 50L kegs brewed especially for the day. Details of the event can be found here.

You can check out Five Years In Five Beers features here. 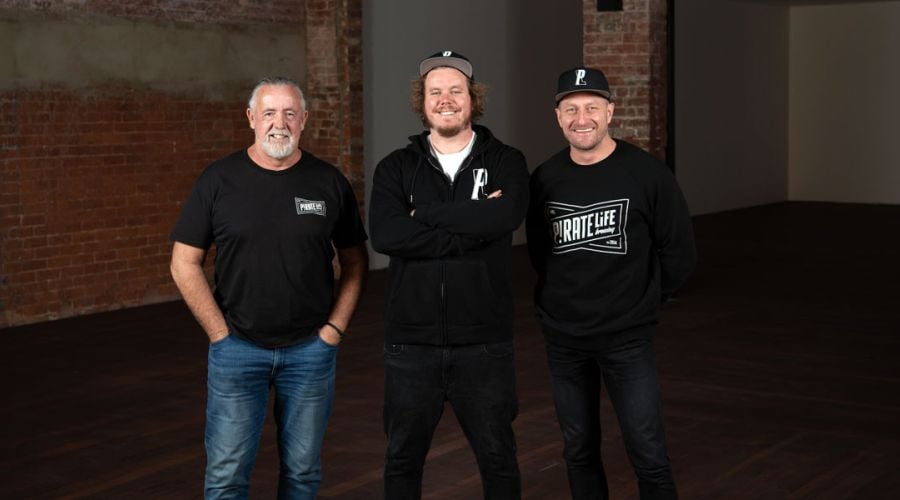