It's not April 1, although it is the silly season. And, no, your eyes are not deceiving you: Adelaide's Little Bang Brewing are releasing 12,000 unique hazy IPAs later this month. With the potential – as things stand – to take that to 75,000.

Why? For many reasons, spanning an innate sense of mischief and a love of playing with technology, as well as a desire to try and screw with Untappd and beerstagram, and even a growing fondness for the increasingly ubiquitous hazy IPA style.

How? Using their label printer's impressive technical capabilities and an algorithm developed by brewery co-founder Ryan Davidson as he sat giggling to himself while wife Kerri watched Netflix on their couch at home.

Looking back at the development of the madcap scheme, he feels reality itself, and our conception of it, has taken "a bit of a pounding" in 2020; even in relatively COVID-unscathed South Australia, they recently went from celebrating the return of being allowed to stand up while drinking to a short-lived yet bloody stringent lockdown based upon a lie. Meanwhile, at the same time as the ground has continually shifted under our feet, and time has stretched and contracted all at once, there were constants to which we could cling.

"Through it all we could really rely on there being at least one hazy IPA released every week for the past year. Probably a handful of them," Ryan says. "Maybe this is an attempt to overload the circuit, or perform that voodoo ritual to explode the Death Star."

It's a voodoo ritual that will see a new hazy IPA – one that's been trialled under the Lorem Ipsum banner in keg in recent weeks – released mid-December with no two cans the same.

Each will have a different name: a unique combination of three words generated by a spreadsheet program that's the result of "endless hours of tweaking" which Ryan "found entertaining for about six months". And each will have a unique label design created by their graphic designer, Matt O'Connor, whose work on Face Inverter took out top spot in the inaugural GABS Can Design Awards earlier in 2020.

They created artwork that undergoes randomised manipulation for each and every label, featuring "a lot and back and forth" between the pair who, like Little Bang co-founder Fil Kemp, are both from games industry and thus found much enjoyment in such silliness.

As for the words, Ryan drew up three lists with between 35 and 50 in each, tweaking them until he was happy with their comic potential.

"I found that certain words have great humour waiting in them when put in combination with other words," he says. "Giraffe just bounces really well off other words. I ummed and ahhed about having Ukraine in there, but it just works."

Some outcomes are bizarre, some surprisingly succinct, and others, well...

"We have Slippery Orifice Pleasure – there's not really any ambiguity in that one."

They're as confident as they can be they're the first brewery to undertake such a venture, although as Ryan points out: "Then I think there's a good reason because you can't talk about it, because it doesn't have a name, and you can't say what it looks like."

On the plus side, for those beer lovers for whom chasing rare beers and check-ins is a key part of the pleasure they take in their hobby, they know with certainty they'll be drinking and checking in unique beers – with everything that entails.

"[The concept] was sarcastic for a while," Ryan admits. "Customers would call me and ask what beers we had and I'd list eight different styles before they'd say they just wanted a hazy.

"But, as a South Australian [the home of Coopers], I really like that hazy has hit the big time. They are soft and fluffy. Not that challenging. Really generous.

"So I've come around to see them as quite a positive thing. From simply trying to break the matrix, now I am just validating the love."

Of course, a spot of matrix-breaking remains very much part of the plan.

"I really hope our Untappd falls apart and becomes unusable," Ryan says, before adding. "Not maliciously.

"There's so many nice things to this industry and it's exciting ... but I do feel like people take certain things very seriously. Beer is fundamentally about having a nice time. At the end of the day, no one died."

Of course, we couldn't let such a moment pass without asking the man behind the madness to tell us some of his favourites from the initial 12,000. After all, provided he doesn't keep them all for himself, it means you can feel a little more special if you get your hands on one of them.

"It's really, really hard to play favourites with these auto-creations. I've been looking at them for so long," he says. "The main goal has been to arrive not necessarily at the funniest possible combination, but the combinations that are most consistently funny, if that makes sense. Or at least simulating in a lateral, Edward de Bono kind of way.

"That said, every now and then one really jumps out of the pack..." 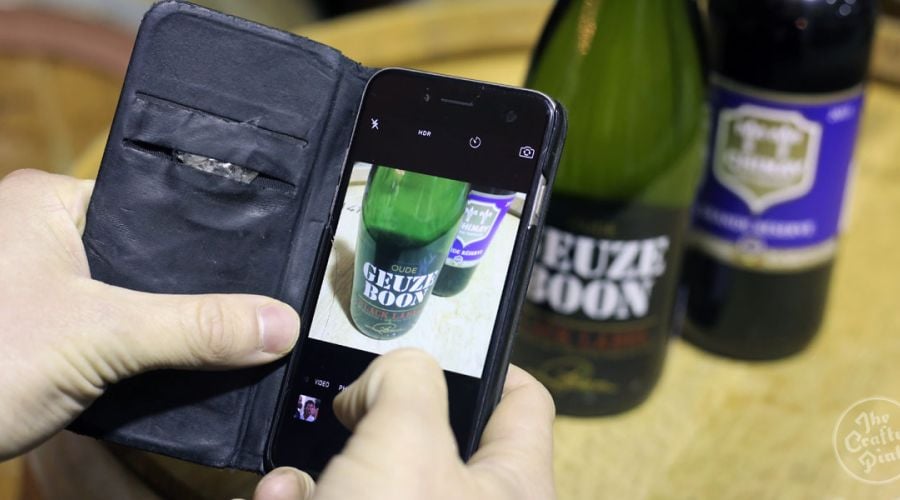