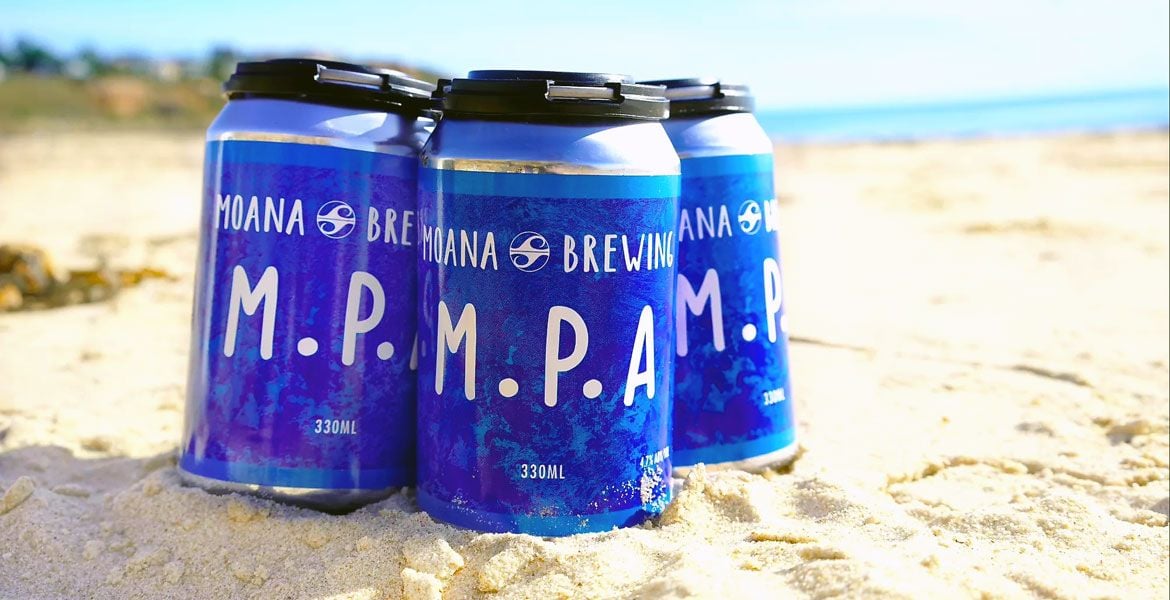 You never know what might prove to be the catalyst for a major life decision. It could be a significant event, or it could be something small and innocuous that simply pushes you in the right direction.

For Mark Roberts, it was the latter. He had been homebrewing for more than 20 years, a hobby that started with him trying to save some money by brewing his own beer. His first efforts were ultimately short-lived, due to a self-admitted lack of patience, however, and it was only around seven years ago that brewing became a priority as his passion for beer continued to grow.

“I got to the point where I wanted to make the best product I could,” he says. “Even then, I didn’t really know what I wanted to do with it. The entire process just bubbled away very slowly.”

Eventually, after much thought and encouragement from those close to him, Mark applied for a producer's licence, and Moana Brewing started to take shape.

Named after the small coastal town in South Australia, getting off the ground was tough; although Mark had supreme confidence in his product, getting it into the community proved challenging.

“It’s been awesome, but pretty hard to get my stuff out there,” he says. “Not coming from a hospitality background, it was pretty daunting in the beginning, but I knew I just had to keep pushing.”

That desire to keep pushing forward takes liquid shape in Mark’s signature beer, the Moana Pale Ale, or MPA. While he initially planned to put out a wider range of beers, feedback he received early in the process led him back to the MPA.

“At the start I wanted to produce maybe five to seven different beers locally," he says. "However, people kept coming back saying they liked the other stuff but the MPA is a winner.

“The MPA really represents a tropical draught beer flavour that you can give to any of your mates and they’ll be happy to smash.”

As for the brewery name, he says: “We really love the area, we’re a really coastal family.

"Most people that do live around here are really passionate about where they live, so I guess that lends to what I’m trying to produce. Without sounding like too much of a wanker, it’s that clean living, coastal lifestyle that I wanted to try and capture.

“I don’t really feel pressure with trading under the Moana name... I just want to brew great beer, it’s as simple as that.”

Find out more about Moana and the MPA in this entry in our long-running Who Brews...? series.

I am a one man band. My brewery/ business has been registered and licensed for about one year. My last "real job" as an engineering surveyor was working for the government on the Air Warfare Destroyer program doing accuracy control measurements building the warships.

In Moana, on the mid-coast of South Australia.

Because I’m mad (about beer too).

I started brewing about 20 years ago because I was broke and couldn’t afford beer! This didn’t last long as I was too impatient and cut too many corners – along with having no idea what I was doing. It wasn’t until I tried a Sierra Nevada Pale in the early 2000s that I thought: “I’ve got to find a way to make beer that tastes like this.”

It's where I live and wanted to create a local product.

Ooh, that’s tough, and probably depends on the week!

Right now, probably my MPA; it's really approachable but still has what you want in a craft beer. It’s a good representation of what I like as an everyday craft beer.

I’d love to say I have a bunch of other breweries as there are soooo many good Aussie beers right now but I only have my own at the moment: MPA, lime seltzer, Sea Haze, Chilli Stout, DryIPA, Amber and a few others.

People that live in my general local area are really lucky to have a number of awesome beers available through local breweries, taphouses and bottleshops. I had a couple beers from Uraidla Brewery recently that were really good.

I’m not an open to the public brewery, just a tiny little setup at the mo. If I can keep getting local support the way I have been then, ideally, a little taphouse near the beach is my dream.

You can find other entries in our Who Brews...? series here, and hundreds of good beer venues across Australia in the free Crafty Pint app.