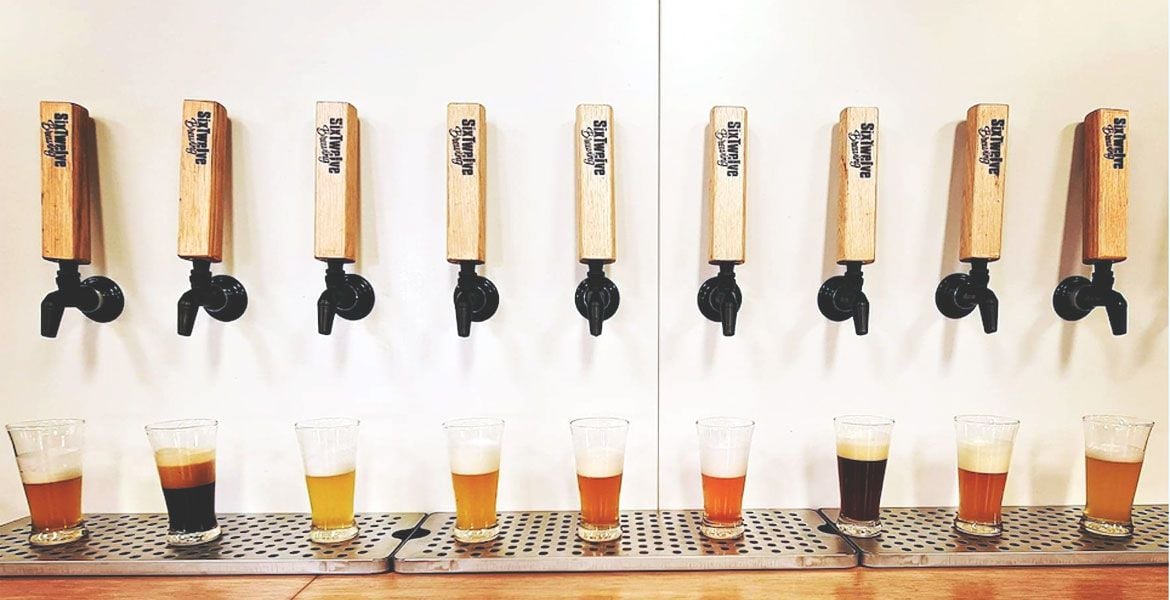 There is a new giant looming over the craft beer scene in South Australia. But it's not one that should cause undue concern for the state's small brewers as the giant in question is of the BFG variety.

Brad Reid, founder and head brewer at SixTwelve Brewing in St Agnes, measures 213 centimetres, or seven feet tall, meaning he definitely stands out in a crowd, something he hopes his beers will do too.

He started homebrewing with extract kits around a decade ago but never fully got into brewing until he made an unforgettable batch at home.

“I made a spectacularly awful beer,” he says, laughing. “It was terrible, a batch that had to go straight down the drain.”

Rather than give up the game, Brad instead channelled his job in analytics to work out what went wrong.

SixTwelve is by no means a one man show, however, with the work done by Brad's wife Alle credited as the primary reason the brewery exists.

“There would be no SixTwelve without her,” he says. “She has been my biggest critic and my biggest supporter from the start, she’s the heartbeat of this whole operation.”

After much consideration, the duo made the decision to chase their brewing dream after Alle was made redundant from her job just two weeks after returning from maternity leave. While the process was a scary one, since opening the doors of SixTwelve in Adelaide's northeastern suburbs in late 2020, the couple say their venue has proven to be such a smash hit with locals and tourists alike it’s going to be a tall order to slow them down.

To find out more – and to keep me from any more puns – we invited them to tell us more in their own words as part of our long-running Who Brews...? series.

We are husband and wife team Brad and Alle. Alle was an implementation consultant prior to COVID, now the heartbeat and the only reason SixTwelve even exists! Brad is still a full-time business analyst but also now a full time brewer/shit-kicker.

We love the taste of great beer, and Brad’s analytical brain loves the sheer science behind making beer.

In Brad’s five years playing college basketball in America, he was exposed to some great beers. But the beer that did it was Dogfish Head’s 90 Minute IPA, that was the epiphany beer. [One of my epiphany beers too, poured through muslin filled with hops at a 120-tap bar in Cambridge, MA! – Editor]

Brad’s height – he’s seven foot so he gets asked how tall he is a fair bit. Depending on the day, he might tell you he’s six foot 12 just to watch the confused look as you calculate how many inches are in a foot.

That would really depend on the day! It could be Five Finger Death Punch or Kanye West, and then a bit of Chris Stapleton. Anything goes so we let the brewing mood direct the music choice.

We have exactly two beers in the fridge:  a bottle of 2018 Pirate Life Limeburners Barrel Aged Stout, and a bottle of Brouwerij De Molen Brett Aged Stout. Both waiting for a special occasion.

Watsacowie Jazzy Red Ale… phenomenal beer. Beer No Evil’s NEIPA is exquisite and their Red IPA made a show on our guest tap too!

Currently only in our taproom, however we just received our first pallet of cans so, very soon, they will be available for takeaway on our website and at the Thirsty Camel Modbury.

In the same place! We are looking to expand at our current location and make an even bigger and better environment for South Australians to come and have a few brews.

You'll find SixTwelve Brewing at  as well as alongside hundreds of other breweries and good beer venues in the free Crafty Pint app.