The craft beer revolution in Australia has been keeping plenty of Canadians busy in recent months. Brewery manufacturer DME has had its hands full keeping up with orders from Down Under, with the new brewhouses at Mountain Goat, McLaren Vale and 4 Pines rolling off the production line hot on the heels of each other – and not that long after Moo Brew’s very own was commissioned outside Hobart. Mountain Goat was the first to take delivery, with their 25 hectolitre (2,500 litres) system being unpacked in October (see above), McLaren Vale hope to have beer brewing in their 35 hec brewhouse before Christmas, while 4 Pines’s whopper – all 5,000 litres of it – should be in place and pumping out beer sometime in February next year.

If you needed further confirmation of how fast things are moving in Australia, here it is. What’s more, they’re by no means the only ones expanding, taking on new staff or drawing up big plans for the future. Not by a long shot.

“We’d had the old brewery since 1999,” says Dave Bonighton, co-founder of Mountain Goat. “It was originally the brewery at the Geebung Polo Club and has been fantastic for us. But it’s a very manual brewery and hard work to make a lot of beer.”

In the time it spent at the brewery’s former Crown Street site and its current home opposite the Royston Hotel, the setup was responsible for 1,862 beers. Hightail was the first and last beer to be brewed, with Dave carrying out the final brew alone.

“It was good closure. There was no one else in the place as I did it on a Sunday. I just played all the old albums from 1999 / 2000 then packed her up with a little lump in my throat.

“The new brewery means we can brew a lot more beer a lot faster as we can’t make enough at the minute. We’ll be able to focus less on having the brewer running around and more on thinking about what’s happening to the brew. It gives us more control of the mash and opens up all sorts of stuff and possibilities to make styles, such as pilsners, that were harder to make on the old system.”

Anyone who knows the Goat brewery well will be aware that most of their equipment has a name. Apparently, the new brewhouse, which has to be female, has initially been christened Bobbi.

“She got stranded in Jamaica for two weeks [on the way to Australia],” says Dave. “Maybe she just escaped and wanted to chill and listen to Marley for a while, so she became Bob…”

Whereas for Goat the new arrival is a much-needed upgrade, for South Australia’s McLaren Vale, it’s their chance to brew their beers in McLaren Vale for the first time. The brewing company has previously been getting their beer made in NSW, using a highly successful marketing campaign originally based around a single beer – now expanded to four – to establish a solid foothold in the Australian market before purchasing their own brewhouse. In that time, they’ve also developed their homebase – the Taphouse and Kitchen at the former Salopian Inn – and chalked up a few gongs along the way. Their brewhouse was due to arrive in Oz early this month, with the aim being to brew in the first half of December.

Managing director Adam Trippe-Smith says: “We are working on two more beers to release under the VALE range, one for summer and one for winter. In addition, we will be launching a second label for more ‘crafty’ beers. In other words, VALE will be our sessionable and approachable beers. Our second label will be bigger, bolder and higher hops and ABV beers.”

Up in Sydney, 4 Pines is preparing for a major upscale in their brewing operation. As the popularity of their beer has grown over the past couple of years, they’ve been forced to turn to the likes of William Bull, AIB, the Australian Brewery and the Illawarra Brewing Company to meet demand that has grown well beyond the capabilities of the five hec system installed at their venue in Manly. That has been responsible instead for keeping up the steady supply of limited releases over their bar, something it will continue to do once the new brewhouse, ten times its size, is installed a few minutes away in Brookvale. 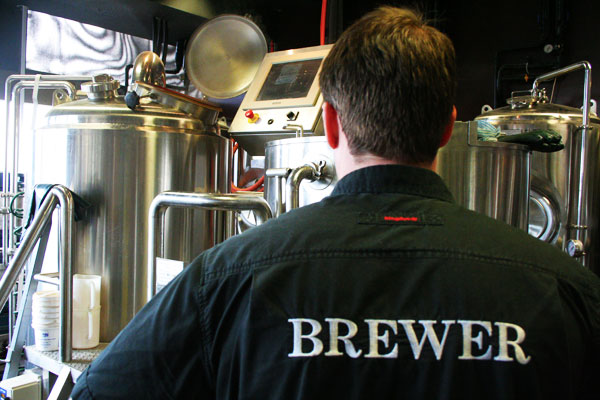 4 Pines current brewhouse, tucked a in a corner of their Manly venue

Co-owner Jaron Mitchell is hopeful the new facility will be up and running in February under the guidance of Nick Button, who formerly brewed on a similar setup at AIB. He is also hopeful they’ll have a bar at the new brewery they can open Mountain Goat-style one night a week to complement their full time venue overlooking the Manly ferry terminal.

“By about our second week of being open we realised we needed a bigger brewery,” says Jaron. They originally considered a 20 or 25 hec system, all the while aware that they may need to upscale again soon afterwards. When stainless steel prices began falling and the dollar became ever stronger, they decided instead “to bite the bullet”.

“It opens up the ability to concentrate on getting our specialty beers cranking and into the market [as well as the core range]. Hopefully, it will also allow the breweries more time to get exposure with the public rather than spending all their time rushing around here, there and everywhere.”

It certainly means we’ll be seeing a lot more 4 Pines beer – as well as those from Mountain Goat and McLaren Vale – on taps and shelves around Australia, as well as an ever-growing number of larger craft breweries capable of expanding beyond their core local markets. Onwards, outwards and upwards!