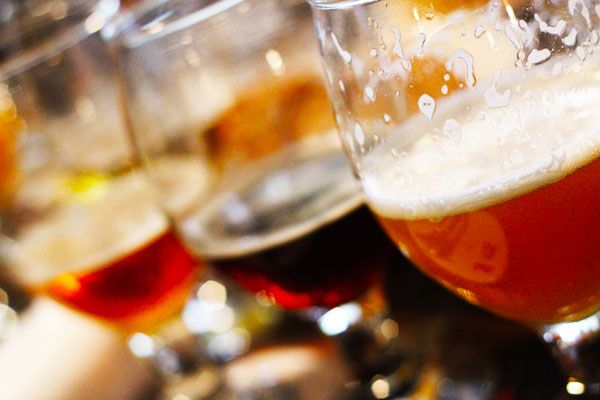 A few months back, when we were putting together the concept for the Melbourne Food & Wine Festival’s first ever beer and cider MasterClass sessions, we took a call asking if we’d be interested in a filming a short piece to camera. Caught off guard, we agreed and found ourselves heading to a warehouse in Footscray armed with a selection of beers that showcased some of the different things brewers are doing across Australia at the minute. There we found a huge, long table set out for a banquet, decorated with ornate cutlery and crockery, bottles of fine wine and surrounded by dramatic furniture.

“Blimey!” we thought, excitedly. “This is all a bit flash!”

The table was, of course, set aside for far greater luminaries than a lowly craft beer lover; we were instead guided towards a black curtain…

There we were asked to explain what the Liquid Lounge sessions were all about, talk a little about craft beer and the results are below. Joining The Crafty Pint in the short film is Matt Rees, mixologist from Der Raum, who will be leading the two cocktail sessions. The Liquid Lounge takes place on March 10 and 11, 2012, at the Boatbuilders Yard on the edge of the Yarra. We’re looking at beers that are pushing the envelope on the Saturday afternoon then hosting a beer (and cider) brekkie with a difference on the Sunday morning. Guest brewers at the two sessions include those from Mikkeller, Murray’s, Mountain Goat, Feral and Bridge Road.

We’ve just learned that the Great Melbourne Beer Breakfast is already sold out, but there are a few spots left for Brand New Brews. Tickets cost $80pp, which includes all food and beer, and are on sale now via Ticketmaster (search for Liquid Lounge). Earlier the same week, we’re also hosting The Gypsy & The Goat at Mountain Goat brewery, where Mikkel and Dave Bonighton will create a new, unique beer while no more than 30 guests enjoy a Q&A in their company and a degustation dinner featuring both brewers' beers on the brewery floor. An exquisite menu is being created by the 36 Collective, pop-up specialists who draw chefs from Melbourne’s very best restaurants. Tickets cost $150pp and go on sale on December 2. It’s on March 7 and promises to be a truly special occasion.