Last weekend, another brewery joined the swelling ranks of Aussie micros. The Black Dog Brewery held its South American-themed launch at Taminick Cellars, a winery in Victoria’s north, at which founder and brewer James Booth unveiled his first four beers. For James, who’s also resident winemaker at Taminick, it was the moment his love of beer and homebrewing took a giant stride forward.

“Since I was 18, I’ve always loved making homebrew from kits,” he says. “There’s nothing like a palate cleansing ale after a day in the vineyard. As time went on I started tweaking the recipes to suit, and then started playing around with all grain brews.

“Being a winemaker I have the passion for creating things: you take the grapes and craft them into something special. It gives me real satisfaction, and the chance to be creative is part of the reason why I love brewing. Brewing is just like winemaking in that you take different ingredients and methods to create something unique.”

Taminick Cellars, just outside of Wangaratta, has been in the same family since 1904, with James the fourth generation of winemakers there. While learning the winemaking business, his beer drinking has followed a familiar path: Cooper’s, Little Creatures, regular supplies brought back from Purvis Cellars in Melbourne, then the discovery of craft beer on his doorstep at Bright and Bridge Road, with the latter’s founder offering guidance and advice.

“The brewery has been a long time plan as it adds another dimension to our winery by giving our visitors another experience,” says James. “A lot of people that come to the cellar door really enjoy beer so it was a perfect fit.”

As for the brewery name, it comes from the family dog, Macca (seen contemplating his next beer above) who, according to James, is “a real character” who tends to win the affections of visitors to the cellar door. 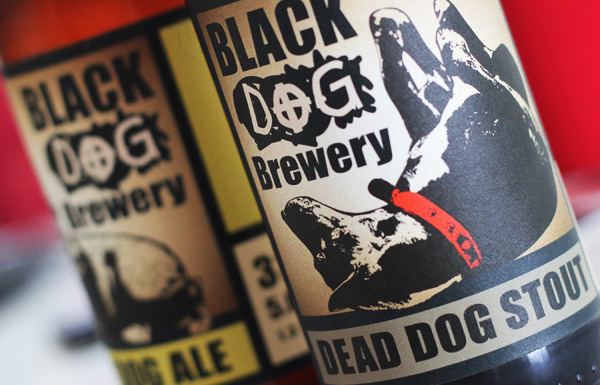 “We wanted the brewery to have a link to our winery and the family, and as Macca is such a part of both of those things we decided that Black Dog Brewery was the way to go. It’s very playful and each of our beer names link back to the black dog theme. The brand is about having a bit of fun and being a little bit different.”

The four beers at launch are the Lazy Dog Ale, a Pale Ale, IPA and Stout. They’re available at the brewery from Thursday to Monday between 11am and 5pm, with an onsite bar operating on weekends. For now, all are being produced on a small pilot brewery as James looks to get word out and win an audience. The hope is to be in a position to install a bigger brewhouse within 12 months. For now, you can get your hands on them at Taminick Cellars, Booths Road, Taminick. And you can keep tabs on Black Dog’s progress via Facebook and Twitter.