If five or so years ago you’d told the average crafty punter in Gippsland that the region would soon be dotted with craft beer destinations, you’d probably have been met with howls of derision. After all, across Gippsland’s vast expanses the old adage of a stereotypical country pub with naught but one or two taps of middling draught rang true.

For a region boasting one of the pioneering craft breweries in Australia – Grand Ridge, who have operated in Mirboo North since 1989 – somewhat bewilderingly, there seemed to be scant opportunity for brewers to make their mark and capture the imagination of locals.

However, in what seems like the blink of an eye, Gippsland finds itself home to a plethora of flourishing breweries, with Good Land Brewing Co (Traralgon), Sailors Grave (Orbost), Bandolier Brewing (Warragul), Burra Brewing (Korumburra), Howler (Lang Lang) and Loch Brewery & Distillery establishing themselves in their relevant communities and providing a welcome change of drinking scenery.

And now Neerim South is set to join their ranks thanks to Adam Sheehan and Five Aces Brewing Co.

Having been introduced to craft beer early in his upbringing via his grandfather’s homebrew – of which he admits: “I may have had a sneaky snip when no-one was looking” – it was while managing a bar at the Mt Baw Baw Alpine Resort that the inspiration for Adam’s first attempts at breaking into the brewing scene took place, even if his initial attempts weren’t met with much enthusiasm from the relevant authorities.

“[It was] known as Kelly’s Bar – an ode to our famous Victorian bushranger – and the grand plan was to purchase the bar and turn it into a brewery," Adam says. "Hence our previous name, Outlaw Brewing.

"Anyway, just like Ned’s last stand, mine didn’t go so well either. We had a lengthy battle with the government [and] management bodies at the time, and long story short, we were unable to convince them that craft beer would be a great attraction for the resort.”

The dream of opening a brewery was put on the backburner temporarily, but Adam had an ace up his sleeve and wasn’t to be denied. Like any craft brewer worth their hops, it’s taken time and the cliched "blood, sweat, and beers" for the right opportunity to emerge, and Neerim South – a picturesque town in the foothills of the Baw Baw National Park – soon stood out as the place to set up shop. A popular stopover for those headed for the ski fields or nearby Toorongo Falls as a result of its burgeoning gallery scene and abundance of fresh local produce, it seemed like the perfect fit for a craft brewery.

As the owner of the Neerim South General Store, Adam’s determination to enjoy the fruits of a long-term-hobby-turned-something-much-more saw him through the requisite negotiation with local council, a lengthy construction project – as well as the impact of multiple COVID lockdowns on their timetable for launching. Finally, late in 2021, Five Aces Brewing Co opened its doors, bringing not just customers but a sense of relief – and excitement at what the future holds.

“It’s an exciting time for craft beer in Gippsland," Adam says. "There have been a couple of new brewers pop up that I think sit well alongside some of our longer established brewers.

"We are a family-based business and are proud of what we have achieved to date in providing local and regional jobs, and opportunities for local suppliers. The locals here in Neerim South are equally as excited as we are to get open. We’re in a beautiful part of the world here and cannot wait to welcome visitors to our region.”

And there’s little doubt it’s been worth the wait.

Boasting an eye-catching, hand-crafted bar produced from solid blackwood timber sitting alongside the brewing floor – a feature that pays homage to the area’s rich timber heritage – Adam’s dream of having the smell of new batches of beer wafting through the public gallery as they sample his wares has been realised. With an unexpectedly roomy beer garden, and five taps pouring his creations – with a range including pale ales, red IPAs, hazy IPAs, lagers, and a dark ale or two in the works – there’s plenty to keep those keen on a session satisfied.

To find out more about Five Aces, we invited Adam to feature in our long-running Who Brews...? series.

A family-based business stemming from running a bar in the Victorian High Country.

I love being creative. The sense of pride in producing from scratch.

It was almost going to be called Outlaw Brewing, in another location, but when this didn’t eventuate, our current location in Neerim South was almost like an extra ace up my sleeve!

My Pale Ale is very easy-going…

As lame as it sounds, I would have my wife! I am still trying to convince her that brewing beer is actually a job!

British India, You am I, The Ramones, The Rolling Stones…

Chang. In my experience on desert islands, a little man would always appear out of nowhere and sell you a warm can, not awesome but at least I would never run out of beer!

No plans to go anywhere else – definitely got room to grow where we are now.

You can try Adam's beers at Five Aces, 135/137 Main Neerim Road, Neerim South, and find the brewery alongside hundreds of others in the free Crafty Pint app. 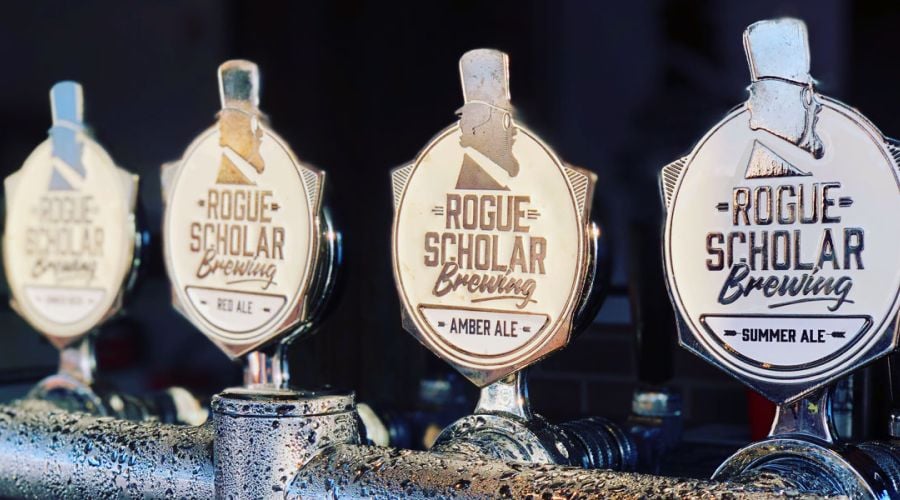