Maybe every generation feels this way, but it sure does feel like life is pretty busy nowadays, with schedules full to the brim with work, family, exercise, hobbies, socialising... However, Kylie and Chris Ind of Woolstore Brewery in Mount Gambier take busy to a whole new level.

As well as continuing to work on their relatively new brewery and beers, while running front of house operations, Chris also owns and runs an electronic store on weekdays, Kylie is an operating theatre nurse, and they manage a storage business. Then there's their three teenage boys.

Yet after meeting the couple, it's evident that they take the busy lifestyle in their stride, managing to emit a calm, laid back presence. What's more, it's safe to say the Ind family have well and truly embedded themselves in the Mount Gambier community. And it's this sense of flourishing community and family spirit that forms the drive behind their decision to embark on the Woolstore and brewing journey in the first place.

The idea first came to them while on holiday in Western Australia. While at Bush Shack Brewing in the Margaret River region – in the beer garden sipping beer with kids and dogs alike running around enjoying themselves – Kylie and Chris had a moment. They looked at each other and decided this was what they wanted to create back home.

On arriving back in South Australia, Kylie took time off work and ventured into Adelaide to train as a brewer with Stephen Nelsen at the TAFE. The couple then went in search of brewing equipment, bringing in a 1000 litre brewhouse and some fermenters. As long-term Mount Gambier residents, they knew about the heritage-listed Woolstore building; it had been vacant for some time so they vowed to change the situation.

Once used to store wool ready to be loaded onto trains for Melbourne or Adelaide, the old train station can still be seen from the brewery's front door – now a monument rather than a station. Accompanying the former station is a natural playground for the kids and bike tracks linking to other tourist attractions in the area.

Step inside and it's evident family is at the heart of the operation, with kids playing gleefully while parents relax and enjoy their beverages. On the second floor, there's function space as well as the storage units they manage.

As for the beers, when I paid a visit there was a golden ale, a pale ale, a single malt and single hop pale, and a stout gracing the taps. Given it's a relatively new brewery, Kylie said she was more interested in locking down their core range before moving onto limited releases. Food trucks pull up on weekends, while they serve up bar snacks too.

Having spotted a hole in the Mount Gambier community, they set about to fill it with the Woolstore Brewery: a place where you can sample local craft beers within a slice of local history. To find out more, we invited Kylie and Chris to feature in our long-running Who Brews...? series.

Kylie and Chris Ind. We run two other local businesses: Anvil Electronics (where Chris spends his weekdays selling consumer electronics and fixing power tools) and Woolstore Storage (storage units in the other half of the building that houses the brewery), as well as having three teenage boys. Kylie is also an operating theatre nurse at the local hospital.

In an old woolstore on the edge of the Rail Lands in Mount Gambier.

Enjoying a tasting paddle in the sunshine in the beer garden of Bush Shack Brewery in Margaret River while on holiday with my family. The kids were happy, the beer was great, people were there with their friends, kids, dogs, parents, grandparents, everyone – we looked at one another and the Woolstore story began.

The beautiful old building where the brewery lives and its ties to the railways and the community. The building has been here since 1907 and many locals remember coming here to deliver fleeces, bales of wool, rabbit skins, etc. As a Woolstore where the bales were sent off on the trains to Adelaide or Melbourne the building was a community hub – that’s our vision too.

Our Pale Ale: complex, well rounded, just a bit full-bodied and with plenty of hops.

Too hard! I would love Eden from Prancing Pony or Kate from Smiling Samoyed because we would have so much fun. I would love Hendo from Rockstar because I would learn so much. I would love some of the early craft beer legends from the US … the list goes on!

Depends on the mood – could be anything from country to pub rock to an old Triple J Hottest 100 CD from the 90s.

Prancing Pony’s Serenity of Speed is my current fave, along with some local brews from Loophole.

So long as I could keep it super cold I wouldn’t really mind! Probably a pale ale from whomever is making a great one at the time.

Only in our taproom at the moment. We hope to have them available on our website very soon.

A thriving, integral part of the local community: a go-to spot for family, friends and visitors.

You can visit Kylie and Chris at 36 Margaret Street, Mount Gambier. You'll also find the Woolstore Brewery alongside hundreds of other breweries and good beer venues in the free Crafty Pint app. 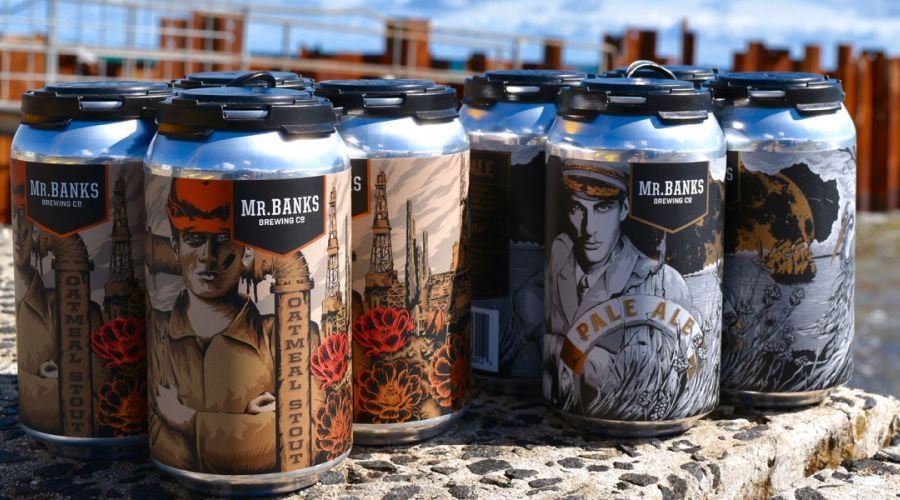 With their cans now landing in the fridges of WA retailers, Guy Southern caught up with the team behind Running With Thieves for a chat about the development of their South Fremantle venue, brewery and distillery. read on