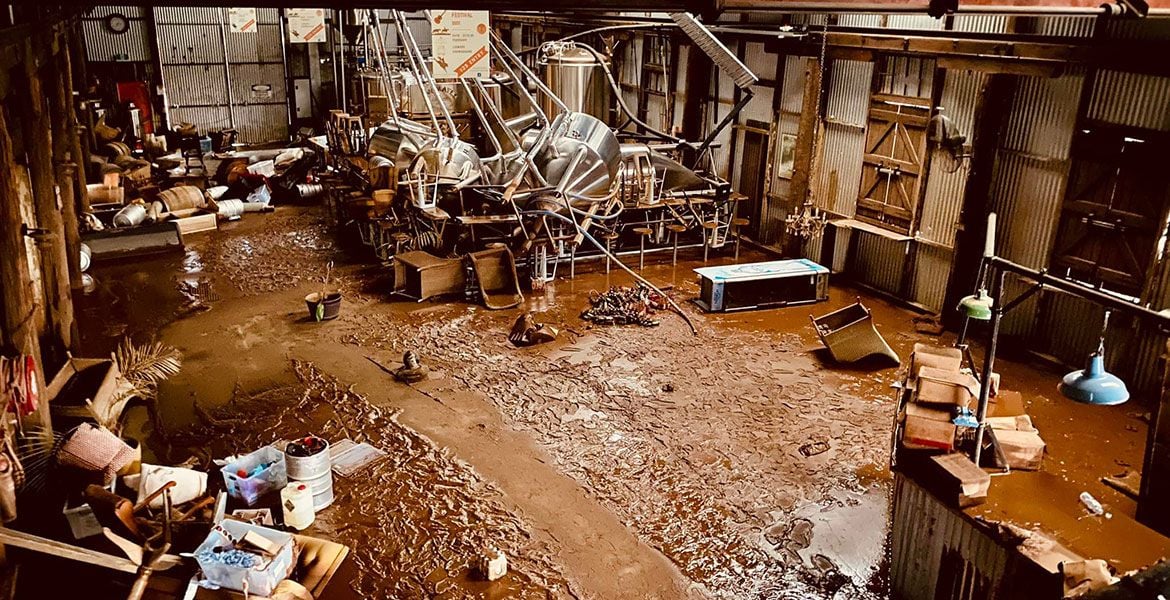 Following widespread floods across Queensland and New South Wales, many beer businesses have been significantly impacted by the damage the natural disaster has wrought. In Lismore in northern New South Wales, images of debris-lined streets have been leading media reports as both people and businesses face up to a long road to recovery.

Among those hit hard is Two Mates Brewing, founded by Andrew Newtown, Grant Smith and their families, and which only opened the doors of their taproom in the final weeks of last year. The volume of water that rushed through the brewery means they're faced with a costly path to rebuild their brewery; now to support their recovery, the business has set up a GoFundMe campaign.

"Setting up a brewery isn't cheap," Andrew says."We finally got it open and have a community that’s massively behind what we put together here, and is absolutely loving what we’re doing. And then boom – you get hit by mother nature at its worst.”

After already experiencing an expensive and exhausting 20-month journey with their council, he says they’re determined to keep going.

“We have to keep moving forward, we’ve been through so much on our journey with our battles to get our doors open,” Andrew says. “We’ve got two families that have invested everything they’ve got into this and now we’ve got to find a way to keep going forward.”

This video gives some insight into the scale of what the past few weeks have looked like for the Two Mates team; Grant was inside the brewery late on Sunday night when water started gushing in and had to kick a hole through the shed to get out before waving down a boat to complete his escape.

“He was going across a massive pocket of water that had containers, trees, and god knows what floating through it,” Andrew says. “That was pretty horrific in itself.”

Since then, no one day has been alike but all have seen the two mates, friends, family and their community cleaning, surveying the damage, and trying to recover whatever they can that has been washed away. At time of writing, they were only just getting power back in part of the brewery, with Andrew saying they still don’t know what will work and what won’t.

“Our tanks are OK apart from some bumps and bruises,” he says. "There’s no doubt our electrical boards and controls panel are fried, all of our CO2, gas, water and electrical around the brewhouse will have to be ripped out and replaced.”

In terms of beer, however, they think they’ve managed to save most of their cans and their full kegs, after putting a call out to their community to keep an eye out for any that had been swept from the brewery. While a few empties might be missing, Queensland’s Black Hops have been quick to lend a hand with those still full of beer.

“All of our kegs have been picked up by the Black Hops team so they’re up at Black Hops II keeping cold, which is very good of them,” Andrew says.

Others in the beer industry have been quick to lend a hand too, offering support and guidance to Two Mates, including some of the area's largest breweries in Stone & Wood and Balter.

“We had Scotty Hargraves [Balter co-founder and head brewer] here yesterday for three hours having a good look at our brew deck and we’ll have some good catchups with him on some ideas he might have to get it going again, in a better way.”

Nonetheless, Andrew says they're working towards getting their taproom open as soon as possible and their online store operating so they can have some money coming in.

“We’re going to try and open up the taphouse in some shape or form to the public next week,” he says. “Utilising our carpark, a couple of kegerators we’ve got, and serving cans out of big skies.

"We’re lucky, there’s a couple of pubs that are on higher ground that have taken a bit of product from us, which is great that they’re supporting local."

Andrew says despite what Two Mates have been through, he’s quick to remind people that they’re a business and aren’t as badly impacted as some in the community.

“Grant and I have families that still have homes to go to and belongings, whereas there are thousands of people who don’t have that in Lismore,” he says. “They don’t have their homes, they lost everything, all their belongings and all their clothes except for what they were wearing. It’s pretty important to put that into perspective.”

As the community continues to recover, Andrew says they hope Two Mates will be able to provide the kind of support to their town that he and Grant always envisaged it would.

“We’re in this to provide a community hub to this place as two families, and now more than ever they need someone like us to support them and vice versa – we need them to support us, which is a hard thing to ask for when you’ve got people that have lost everything."

Like 90 percent of businesses in Lismore, he says their insurance doesn’t cover flood damage if it exceeds the levee wall unless they had paid an enormous premium upfront.

“Having said that, we’re going to try everything we can to get something out of them, but we’ll be in for a battle and that’s just another kick in the head,” Andrew says.

“We’ll keep grinding our way through and get this place back open in some shape or form.”

Government support, meanwhile, is described as a token gesture; despite the floods in NSW and Queensland being declared a national emergency, they believe there isn’t enough happening, leaving people doubtful as to whether more help is coming.

“People are in that anger stage right now,” Andrew says.

At the same time, he says they’ve been taken aback by the support some of their peers and their local community have shown.

“Grant and I say regularly that we’re amazed by this industry, it’s so close-knit," he says. "We’re extremely humbled by what the industry’s done, and community members who give up their time just to walk in and hand out food or clean stuff up.

“I’m blown away by how much we’ve done in a week and half, but that’s the same with everyone in this community.”

To support Two Mates Brewing, you can donate to their GoFundMe here.

The Independent Brewers Association has a resource available for breweries impact by floods, which you can find here.