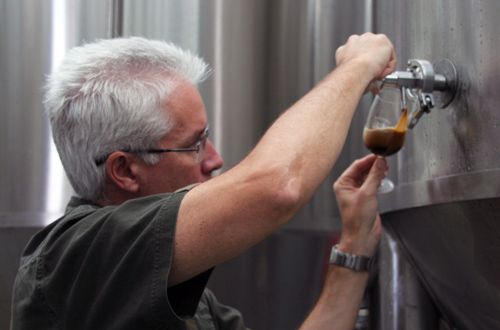 A Shot In The Dark

The days are getting shorter, the coats longer, the rain steadier and the beers darker. So Matilda Bay has opted to bring out its first coffee beer since Crema, one of the first limited release brews to roll through the Garage Brewery’s doors after production was moved to Dandenong in 2005.

Longshot â because it’s like a long shot of coffee, not because of any risks on the brewer’s behalf â has just been bottled and will soon be trundling along the nation’s highways. The happy consequence of a chance meeting between head brewer Scott Vincent and master roaster Toby Smith of Brunswick-based coffee merchants Toby’s Estate, it’s a coffee infused dark ale featuring the Ethiopian Yirgacheffe bean, known for its mint, flower and lemon aromatics. (Matilda Bay head brewer Scott Vincent pours Longshot from the tank)

The Garage crew roast their own coffee in house so, when they started discussing making a dark ale for their 2010 winter seasonal, it seemed a natural progression.

“The process of roasting coffee is very similar to making dark malts,” says Scott. “Toby and I got talking about different raw materials in terms of barley and beans. We brought him down to the brewery, he brought some coffee and we talked about what we wanted in terms of flavour. We wanted lovely aromatics to come through but didn’t want any harshness on the back of the mouth.”

Thus Project Fireside started. The Matilda Bay brewers played around with favoured dark ale recipes from their home brewing days to create their desired base beer then went to work on finding the right method of coffee extraction, ultimately using cold, filtered water and adding the mix to the tanks post-fermentation.

The result? Well, straight from the conditioning tank pre-filtration, you’re immediately hit by the coffee aroma. And, while hints of the dark, chocolate and roasted malts can be detected in the flavour at this stage, it’s the subtle roasted bitterness of the coffee beans that remains the overriding sensation; think a full, creamy stout with a crisp, dry finish.

Post-filtration and through the bright tanks into the bottle, it’s another beast altogether. Gone is the almost espresso-like nose in favour of a sweeter, cocoa-cum-mocha aroma as the chocolate notes of the malts come through with a touch of vanilla to balance the coffee. It’s goodbye stout-like roasts, hello dark ale richness, with the coffee infusion now just that: an infusion that adds to the ale base without overpowering it, making for a more approachable finished product.

NB: It’s a Dan Murphy’s exclusive. Expect to find it on shelves by the start of July.